In competitive team battles there will meet the tanks of the governing party against the opposition. Join and help your team to win! There are dynamic and exciting battles waiting for you, where power of ammunition is not all. Use your speed and agility to defeat your rival.

Features:
- Funny playability
- Quick action
- Online fights in principle similar to game Counter-Strike
- Different tactic with various weapons (light tank can defeat heavy tank)
- Destructible environment
- Modern graphic
- Tank customizing and equipment purchasing at the beginning of each round
- 10 weapons and 3 special accessories such as mines, smoke screen and tree branches on the tank as a tank camouflage
- 21 different types of tank camouflage for better camouflage in environment
- Classical and digital camouflage in templates wood, desert, winter country
- Suitable choice of camouflage can increase the chance to survive
- Play as you can see , no additional GUI elements over the rival´s units
- Possibility to use bush as a cache, the enemy cannot see any GUI, only the tank model. Till after the player is hit, the name and status of the tank is displayed 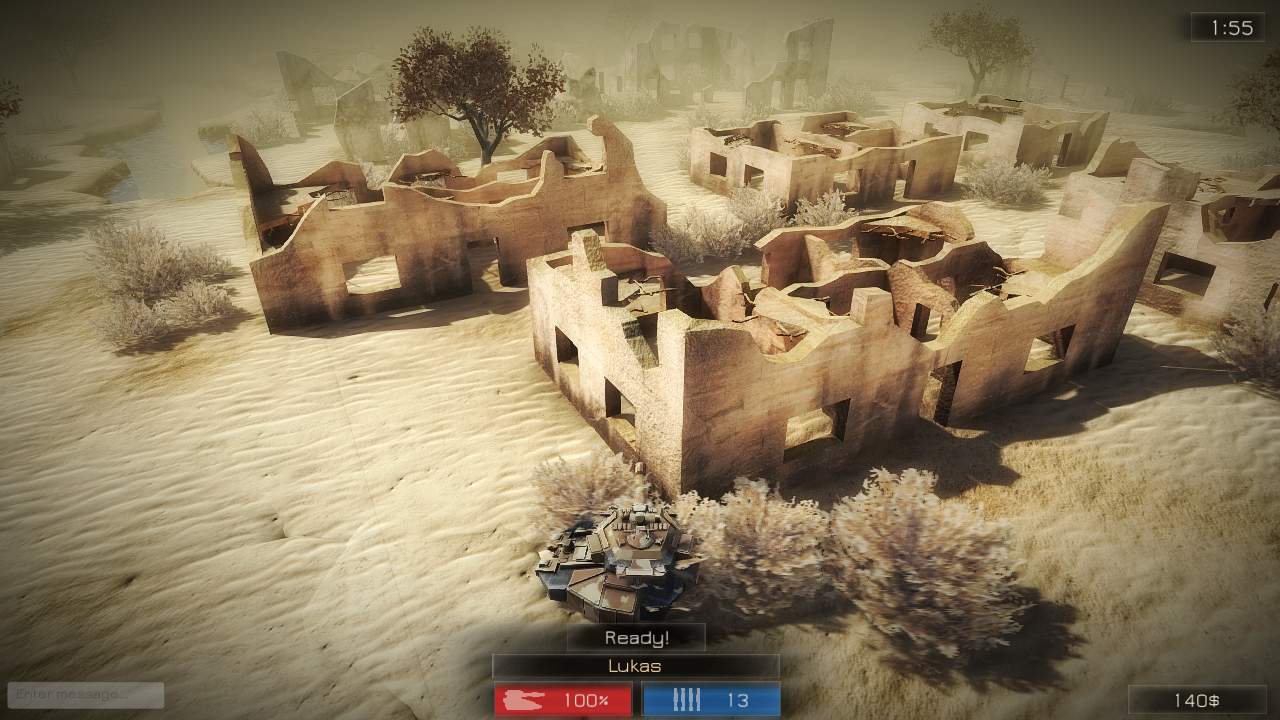 Rules
The player chooses the team. At the beginning of each round , the player has the possibility to entry a shop where he/she can buy equipment, arms and ammunition according to available money/finances. Money is possible to gain according to merits in battle. These are fairly divided according to how many HP the player takes from rival player, not according to number of destroyed units. The aim is to destroy all rival player´s units or to occupy definite point. The players can use surrounding buildings, plants and suitable type of camouflage in their favour. At the base camp it is possible to fill up the munition.

Tactic
Each player will found its own tactic and favourite way of game playing. The principle is, that the player with heavy artillery has the support of at least one player with lighter artillery. During the heavy artillery overcharging it is appropriate to be protected by another player, whose gun takes shorter to be overcharged.

The Game and its balance
The players can use the weapons which differs by power. The balance is made by length of artillery overcharging. It means, if the player, who has heavy artillery, fired, has to wait for overcharging longer than the player with light artillery . More powerful weapon requires bigger accuracy of player and his/her manoeuvrability. By this it is ensured that the player with weak artillery has possibility to defeat the player with strong artillery.

Changes and new features based on community reports:* Full controller support
* New visibility system
* No falling into the water and similar frustration
* Crosshair
* Tank speed depend on damage and more.

The game is available on steam Store.steampowered.com

Game is now in state of preparing to release. Few new screenshots added.

Thanks a lot for the key :)

Hope it plays as good as it looks .

The game looks nice! Thanks ^^