Tales Across Time is a linear, story-driven RPG experience from the creator of 8-Bit Adventures: The Forgotten Journey. It uses the classic short-story format to tell the tale of three very different characters; each living centuries apart, but in the same location.

Each narrative presents a different experience. Explore a haunted, ancient ruin; help a young woman save her town and her love; face off with an unstoppable masked killer. Many tales have been told across time; will yours be able to transcend it?

Additionally, my most recent game Tales Across Time is also participating in the sale, making an already cheap game even cheaper! At just $2.69 USD, you really can't beat that price; trust me - I set the prices ;)

As I said last month (on Steam), the discounts won't get any lower and the Wishlist numbers just keep going up (over 3500 for 8-Bit Adventures and over 3000 for Tales Across Time!).

Every sale contributes to the development of 8-Bit Adventures 2, and I cannot stress enough how much that helps! So if you've been interested in starting a new adventure, or know a friend who would like the games, then this is the perfect time to jump in and support a new project!

But with that out of the way, let’s get onto 8-Bit Adventures 2!

So…how about a release date?
For a game that’s coming out in 2017, it probably seems a bit strange that I still haven’t announced a release date. The reason is that I don’t want to commit to a date that I ultimately can’t meet. Delays are always disappointing, and we see them very regularly in this industry.

The game is progressing rapidly, and I am confident that it will be ready this year. But because 8-Bit Adventures 2 is developed by such a small team (one person does art, one person does music, one person programmed the battle system, and I do design/writing/gameplay/whatever else), everything takes a long time to get done.

However, on the flip-side, being so small (and digital only), there aren’t the issues that big publishers run into. We could technically finish the game and release it the next day (although I wouldn’t recommend doing that)! So please don’t be concerned about the lack of a release date. If nothing else, it'll definitely be out before Kingdom Hearts III ;)

The Battle System
Okay, onto the main event! Let’s talk about the battle system. As you can see, it’s had quite the visual upgrade (I think Jerram has done a phenomenal job on the backgrounds, monsters, and UI), but there are numerous changes beyond the new coat of paint.

In the interest of transparency, please note that the in-game battles still have some graphical glitches that need to be sorted out. As such, I’ve taken pictures of the gameplay and edited out those issues. Despite the touch-up, the images below are an accurate representation of the battle system as it appears in-game (although small details are always subject to change).

When I first started designing the battle system, I knew that I wanted to have more abilities and commands at the player’s disposal. Where I ran into difficulty was establishing how to fit all of those commands into the UI without making things seem cluttered or unintuitive. The 8-Bit Adventures 1 menu system had to go! Eventually, I decided on using icons instead, and ultimately the UI took its inspiration from Mother 3 – in a couple of ways.

Commands are issued by selecting icons in the top-left corner of the screen. It’s a simple, intuitive way for the player to select the actions they want to take. The other element inspired by Mother 3 is that you can see your characters sticking out from behind their respective status windows. The character that is standing up the highest indicates whose turn it currently is (in the case of the above screenshot, it is Warrior’s turn). However, unlike Mother 3, these character sprites have various poses to accompany each of their actions, which make battles look more dynamic.

Party Members and the Swap Command

Now, obviously there’s a lot to talk about here, so let’s start with the basics. The battle system was inspired by Final Fantasy X’s take on turn-based combat. There are 7 party members in total (3 returning, 4 brand new! More on them in the future), but only 3 can participate in battle at once. However, at any time, your characters can swap in and out of battle. So you *can* technically use all 7 playable characters in a single encounter, and this leads to a lot of new potential strategies.

Particularly since characters now have several unique factors to take into account, beyond their stats. Not only does each character possess a plethora of special abilities/magic, but also two new mechanics – Personal Skills and Personal Abilities.

A Personal Skill is a special command unique to a particular character (it’s the second icon on the row), which allows them to perform a special action with no MP/AP cost. For example, Warrior’s Personal Skill is Shield Bash, which allows him to attempt to inflict the ‘Stun’ status on an enemy. If the Stun is successful, he then follows up with an attack. If it’s unsuccessful, though, then no damage is dealt and the turn is wasted. So it’s very much a risk/reward ability.

A Personal Ability is a passive ability, again unique to a specific character. For example, Warrior has a chance of counterattacking an enemy strike, while Thief gets a speed boost at the start of battle, often allowing her to get the first turn. They’re small additions which make every member of your party feel more distinct, and can feed into interesting strategies. For example, you could include Thief in your party so that she gets the first turn, and then immediately swap her out to allow a different character (perhaps a slower, heavy hitter) to take advantage of that speed boost. 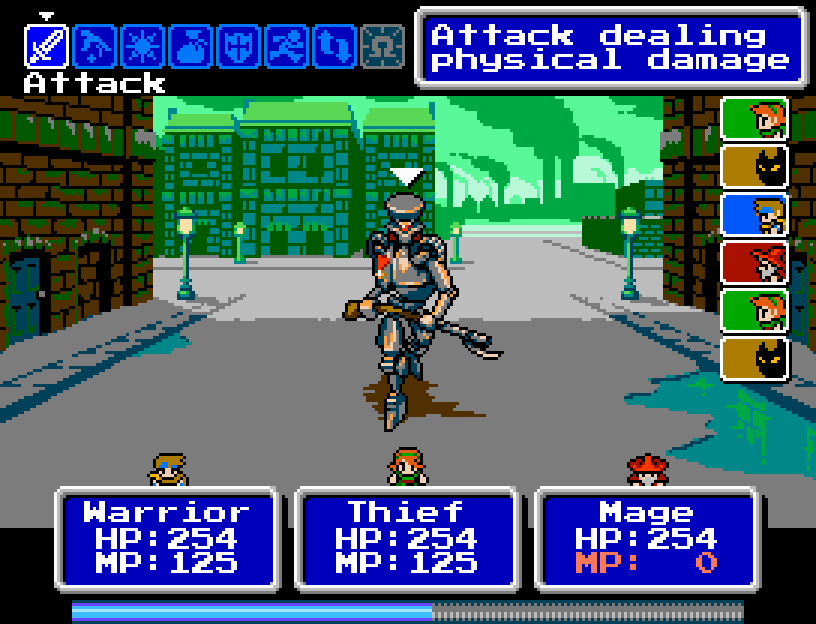 On that note, I should explain the new turn system. This is the main element inspired by Final Fantasy X, as each character and enemy now has their own separate turn. In 8-Bit Adventures 1, you would select commands for all of your characters and then watch everything play out, but you had no exact way of knowing who would act when.

Well, now you do! In 8-Bit Adventures 2, you issue commands to each character separately, and the list on the right side of the screen shows you the turn order – i.e. the sequence in which characters and enemies will act. So in the image above, it is currently Thief’s turn. After she’s done, the Clockwork Soldier enemy will have its turn, followed by Warrior, then Mage, then Thief, etc. This also contributes to a deeper level of strategic gameplay, as you can more effectively plan ahead.

In addition to Personal Skills and Abilities, 8-Bit Adventures 2 also features a “Limit Break” mechanic titled Omega Burst. Now, if you’re an RPG veteran, you generally know what this entails – each character has a special, ultimate ability which can be used once a bar fills up. The bar is filled up by the player both dishing out and receiving damage. However, Omega Bursts have one unique difference. Rather than each character having their own unique energy bar to fill up, there is a single bar for the entire party. Once it is filled up, every character has the option to use their Omega Burst; but once a character uses it, the bar is completely emptied.

I decided to take this approach due to my past experience with other RPGs that implement this mechanic. Sometimes in a game like Final Fantasy VII, the character who’s Limit Break I’d want to use wouldn’t get their bar filled in time, while the other two members of my party would. This new ‘one bar fits all’ approach means that you can choose whose Omega Burst to use and when. And since every character contributes to it, the bar fills up a bit quicker than it would in some other RPGs, meaning that you’ll still get to utilise plenty of these attacks in tough battles. 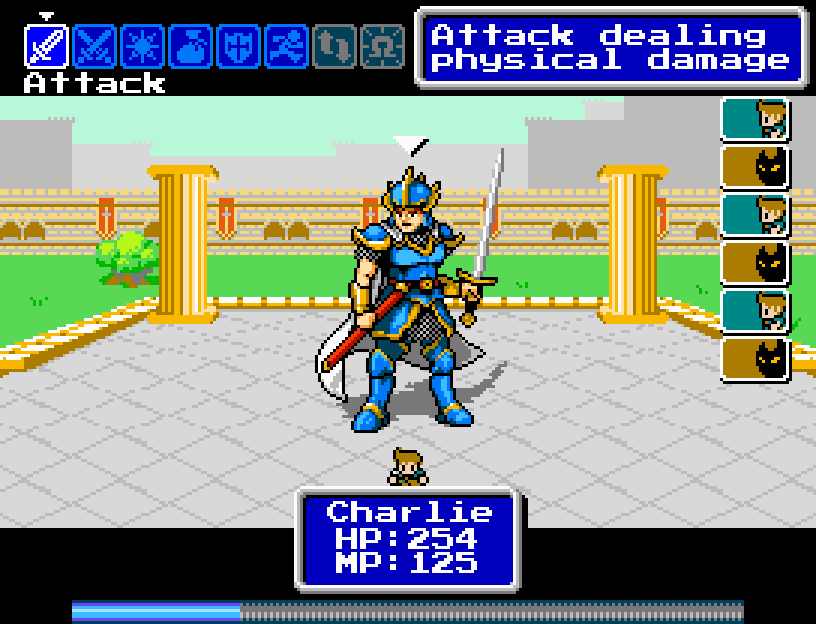 Finally, let’s discuss Augmentations. These are special, passive abilities that are able to be equipped to a character – much like Weapons and Armour. Augmentations can be found in treasure chests, like any other piece of equipment, and provide numerous effects that allow you to further customise your characters. This includes things like increasing a particular stat (e.g. HP+10%), granting immunity to certain status ailments, decreasing the amount of AP/MP it costs to use special abilities/magic, imbuing your ordinary attacks with the ability to inflict negative statuses, and much more.

Oh, and one last thing I should mention – the Colour Element system from the first game is no longer a mechanic in 8-Bit Adventures 2. I was considering it early on, but to put it simply, I feel like I did everything I could with it the first time around. So no more matching colours, but I think the new systems will have plenty of depth =)

And after all that, we still haven’t talked about things like the tiered-attack system, or one particular character’s unique command and equipment system. But I hope this helps convey that 8-Bit Adventures 2’s combat is going to feature a lot of depth and possibilities for interesting strategies.

With that said, though, if you’re concerned about the mechanics becoming too complicated this time around, please don’t worry. While there are a lot of systems, most of them are pretty simple in practice and you can choose not to engage with them. But if you’re an RPG veteran like myself, then you’ll likely have a lot of fun trying to form your own strategies and customise the party.

Till Next Time!
That’s all for now, but there will be plenty of news in the (relatively) near future! I always post 8-Bit Adventures 2 updates here on Steam, but I also highly recommend following @CriticalGamesAU on Twitter, as that’s the best way I’ve found to keep up-to-date on news!

You can also check out the Critical Games Website[www.criticalgames.com.au] for more 8-Bit Adventures 2 info and screenshots (including some animated GIFs), or check Facebook at: Facebook.com

Thank you very much for reading, and I hope everyone has a fantastic Summer (or Winter if you’re in the Southern Hemisphere, like myself)! =D

Twitter
Tags
Embed Buttons
Link to Tales Across Time by selecting a button and using the embed code provided more...