Stellar Sovereigns V0.89 update is live, introducing the New Commercial Trade System, that unlocks the ability to set up trade routes between solar systems. This allows for freighters to carry and sell off trade goods produced by colonies and the empire to gain revenue from trade tariffs. 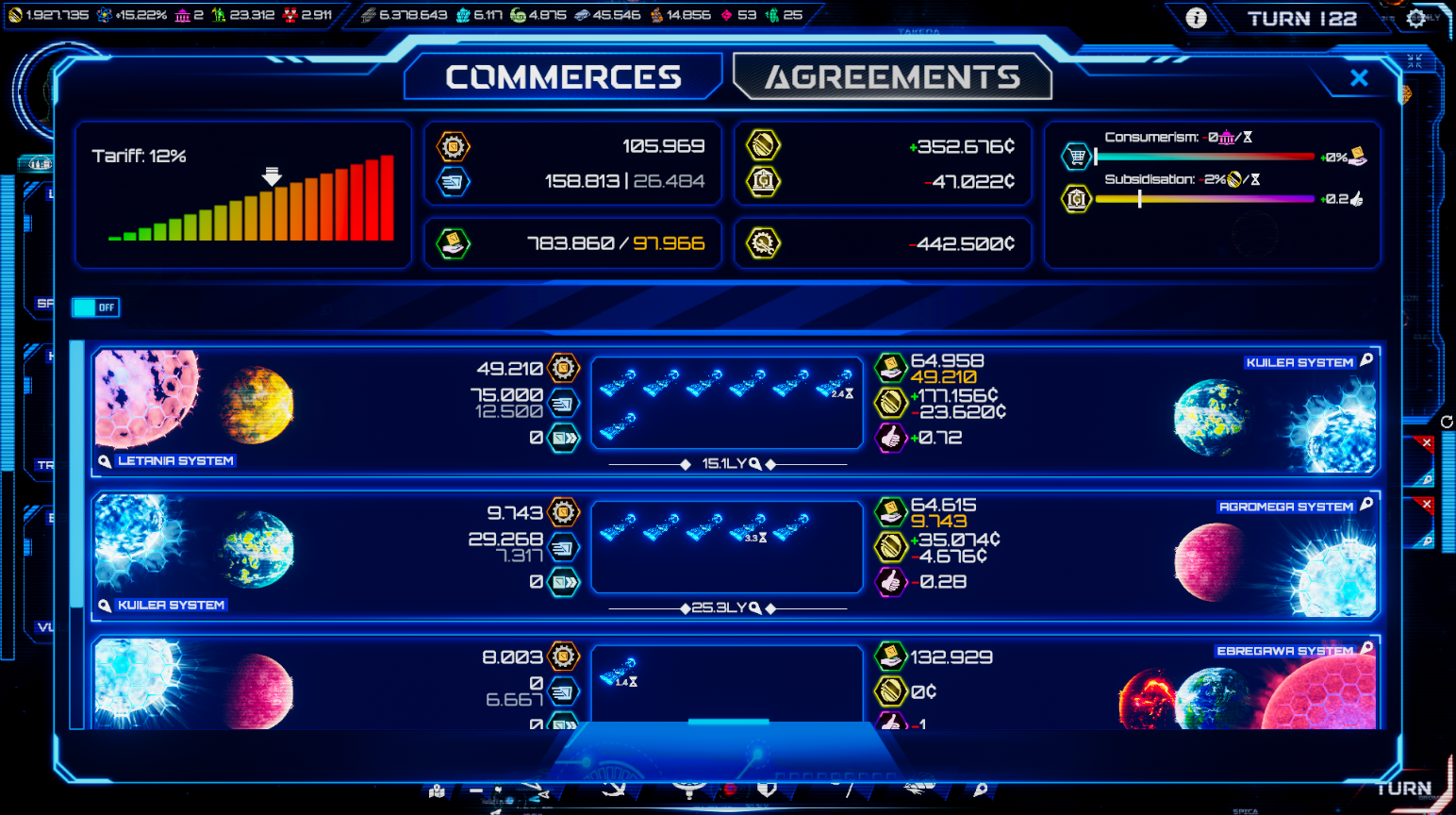 A trade route is created between an origin system with a trade station where the trade goods are shipped from to a destination system which to the goods are sold to.

You can establish a route by selecting a trade station's create trade route action button and use its gizmo to select a destination system.

The length of a trade route plays an important parameter in a factor called Round Trip Modifier a value that is determined based of 2x the route length divided by the FTL speed.

A trade route's shipping capacity is the amount of goods that can be delivered to the destination system each turn.

Which is the sum of freighters cargo capacity divided by the Round Trip Modifier. 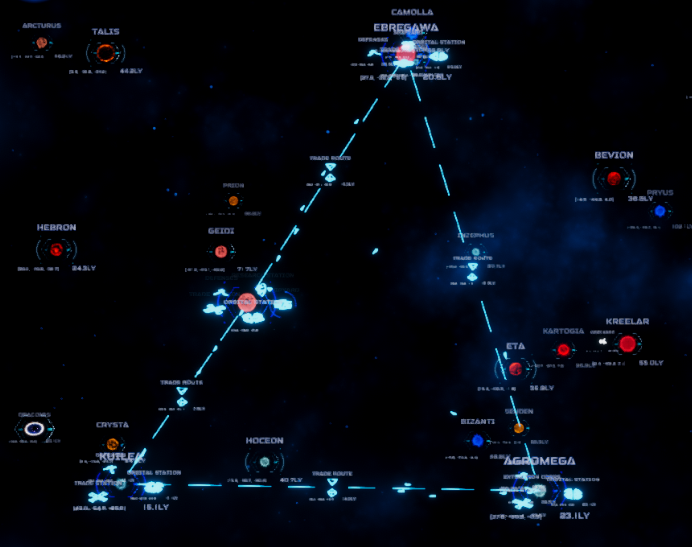 Each route is one way, but can be chained together, even creating a loop in which all connected system's trade demand and supply capability is utilized.

Important to note that surplus goods as in; the goods that are not sold due to lack of demand, will be added to the next route within the chain, allowing for high production systems to supply across the entire chain.

Strategic overview of trade traffic from the star chart

The logistics of trade carried out by freighters a new class of vessel, that can be constructed from any shipyard and assigned to trade routes from the trade menu.

Each freighter has a physical location at all times, when created they stay at the shipyard and upon assignment it flies to the origin system of the route from where it begins its routine of freighting.

Pirates and enemy forces may attempt to intercept freighters at any of these three locations and if successful gain credits and destroy them.

Note that certain technologies increase the chance of evasion or blockade running allowing for success even when there is no friendly force to provide interference.

To fortify the trade route's most vulnerable location the midway point a deep space outpost can be constructed upon unlocking the necessary technology. 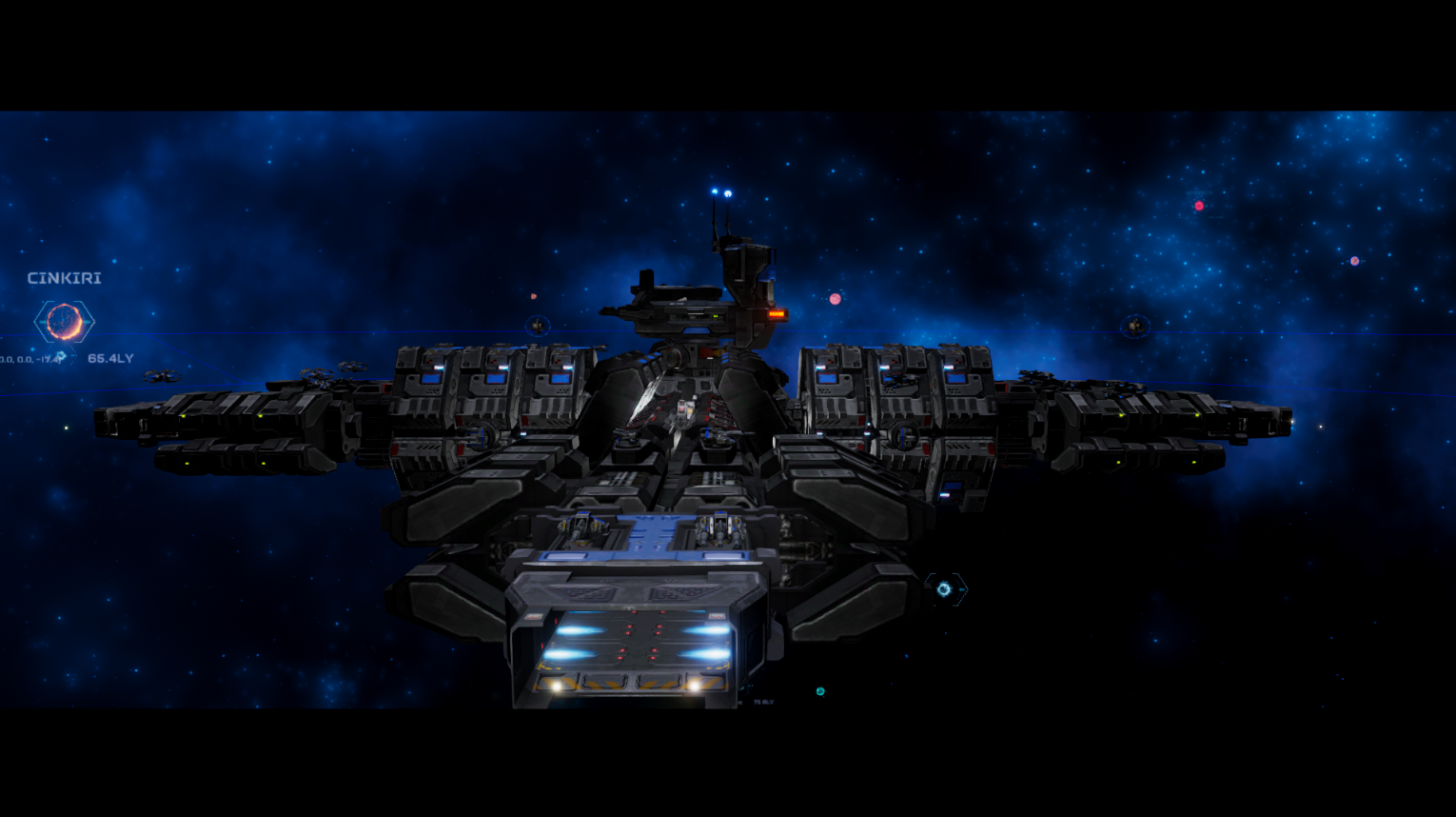 This new station denies enemy forces to intercept freighters at the midway location as long as the station is not destroyed.

It is a powerful installation equipped with 24 turrets 8 missile launchers, 12 fighter hangars and 5 slots for modules.

Trade goods produced by the three colonial sectors; industrial, agricultural and scientific as well as the various planetary resources exploited by them.

Each sector's capacity and their resource gain generates trade goods by a given rate indicated as per each resource. 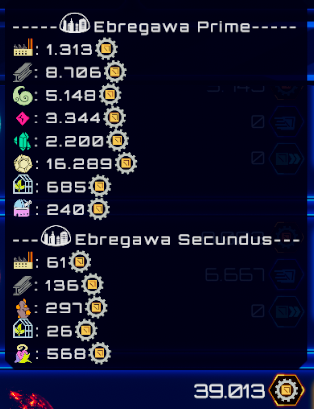 The trade good production rate is shown when hovering over a resource icon, displaying how many trade goods are produced after the number of resources gained by the particular planetary industry. 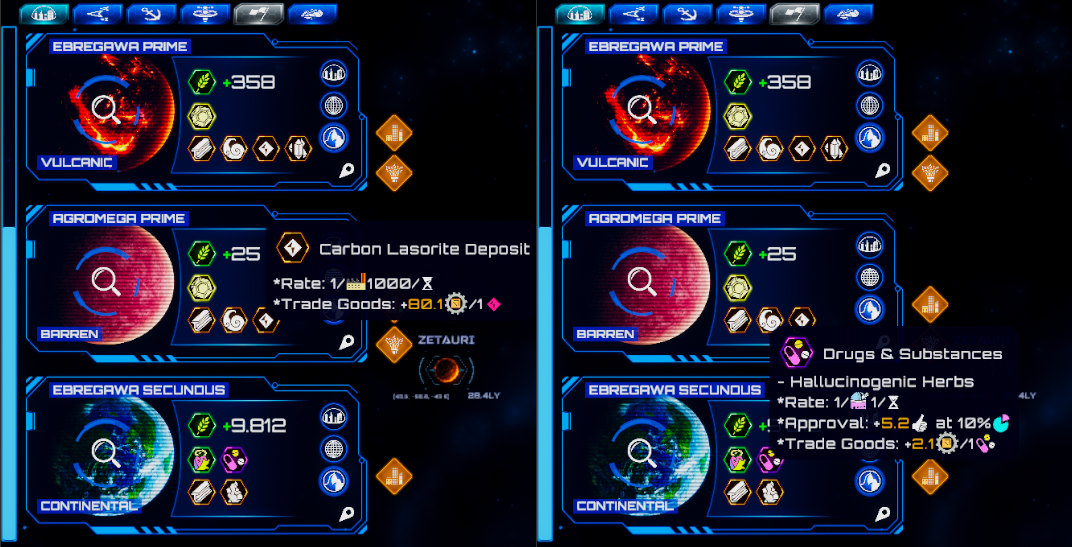 To increase productivity of trade goods, colonies can targetedly develop those industries with exploitable resources, research improvement technologies or specialise via empire traits.

However, not every colony is profitable to be goods producing hubs; resources may scares, colonial development expensive, environmental factors may hinder productivity.

Nevertheless a well organised trade route chain supplied by a few productive systems can make commercial efforts be lucrative and beneficial across the whole empire.

On one hand the benefit of commercial activity is trade tax revenue from setting trade tariffs, on the other hand is the effect that has on population's approval rating.

When a system receives a trade route connection, its population expects its trade demand to be fulfilled, which to what ever degree it is happening will effect the approval rating of that system.

The steepness of tariffs further effects trade approval in a negative trend, and that is why tariffs can also be set to 0% if needed to avoid the negative hit to approval.

The subsidisation governmental action can be used to artificially increase trade approval rating but it comes with the cost of the subsidies price of trade goods.

Trade approval is an excellent way to boost your young colonies since positive approval translates into increased population growth, however it becomes much harder to fulfil the market demand of high population worlds and gain their approval, but may be more profitable...

Market Demand refers to the number of trade goods a destination system is expected to receive every turn, for which in turn revenue from tariffs can be collected.

This number is the ratio of the colony's population willing to purchase trade goods.

The ratio of such population starts at 5% upon establishing a trade route and randomly increases or decreases each turn.

The range of this fluctuation is between -X effected by the colonies approval rating and +Y by the severity of taxes and tariffs combined.

A direct way to inflate market demand across the whole empire is through the use of Consumerism governmental action that in turn of political capital increases every colony's Market Demand by a flat percentage.

A period of increased or decreased commercial activity refers to colonial events Market Boom and Market Crash respectively that has a chance to be triggered on trade route destination worlds.

The chance of market boom event is increased by the presence of surplus goods while Crashes by the lack of fulfilled demand.

This new game feature comes with its own tech tree unlocking bonus to trade demand growth and to trade approval, the new deep space outpost, evasion and blockade running capabilities, a mega freighter class as well as cargo capacity improvements. 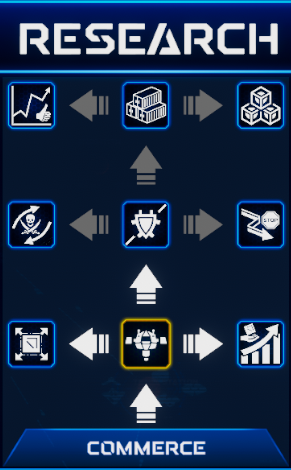 This update brings seven new traits for your empire to specialize in the areas of commerce, salvage and resource exploitation as well as introduces the rework of two existing traits that I felt previously were underwhelming. 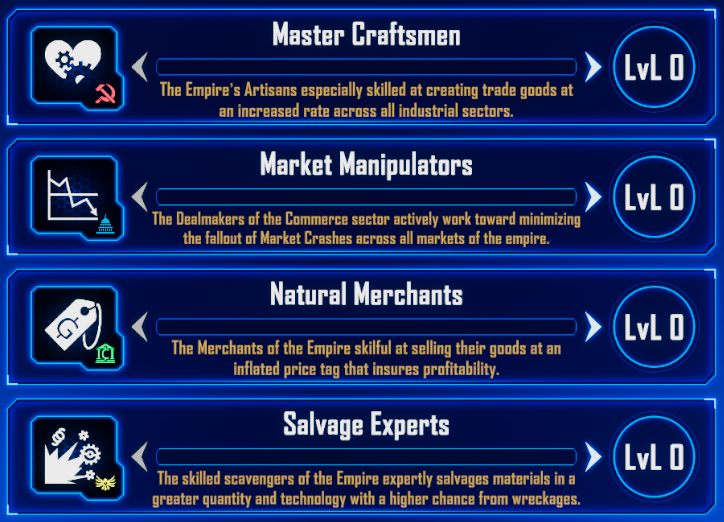 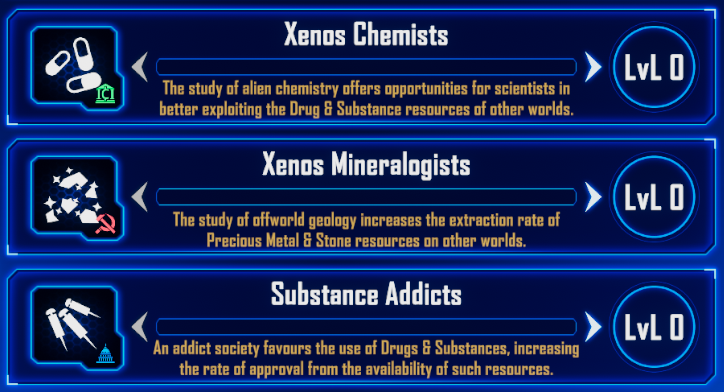 A significant change to planetary resource import/export has also been implemented in this patch, this change applies restriction on from where and on how much resources can be imported/exported.

Transfer of resources between colonies now, can only be done along trade routes and its total amount is capped by the connected trade route's shipping capacity.

More specifically the maximum throughput of a route chain, meaning the upper limit equals to the smallest shipping capacity amongst the routes of the chain in between the importer and exporter colony.

The import menu indicates this restriction in the freight column, that is automatically calculates the current capacity available in between the current colony and any of the other colonies of the empire.

Zero freight capacity indicates that there is no more shipping can be done from that location either due to exhausted capacity or that it has no trade route connection.

The INF. label of freight capacity indicates that the exporter colony is within the same solar system, which allows the transfer of resources without the need for freighting in an infinite capacity.

This change also applies an associated cost for transferring resources between colonies, in an indirect way.

Also note that this will effect the shipping capacity of every trade routes along the chain in between the importer and exporter colony.

Cutbacks is a hidden feature of Stellar Sovereigns, that is designed to reduce various spending at the beginning of each turn in case income minus expenditure yields a negative budget.

When this happens, an algorithm tries to reduce research and colonial development spending with the aim of achieving a none negative balance if possible.

The new thing about this feature now is that it lets the player knows that it has happened and in what way it has impacted either research or colonial development projects previously set up by the player.

Thanks to excellent feed back from AltRon on YouTube a new feature has been added to the fleet menu, a way to unlink a vessel from a fleet placing it into the local reserve.

A couple of things to note, the fleet must be in orbit of one of your owned system and if every vessel is unlinked the fleet will be disbanded automatically upon closing the menu.

To accommodate the creation of fleets the action button have been placed at the solar system and renamed to represent better their function.

These are now called Form Combat/Colony/Mining Fleet, and they only become available, when there are appropriate vessels present in the local reserve or if a shipyard is available in orbit that can construct such vessels.

Further more in the interest of clearer overview of combat fleets on the star chart, if a capital vessel or any of its escorts are missing from a fleet their icon is now omitted. 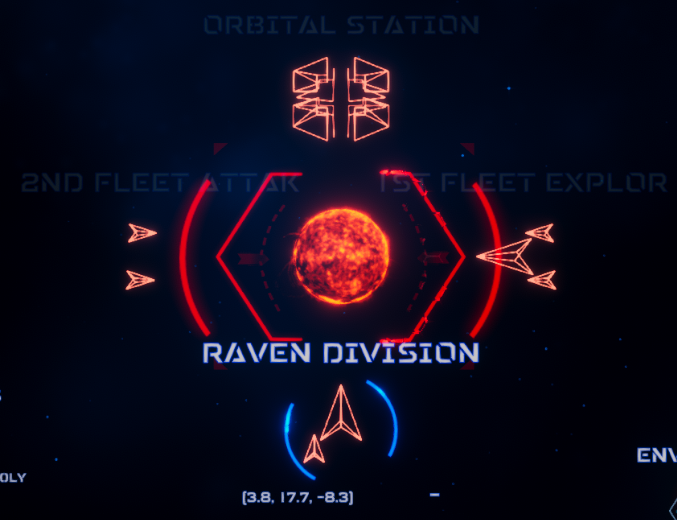 I hope you find my take on trade interesting, with its blend of economical, social and strategic aspects.

It took me a lot longer to finish than I expected it and it grew into a lot more complex feature then I originally imagined. 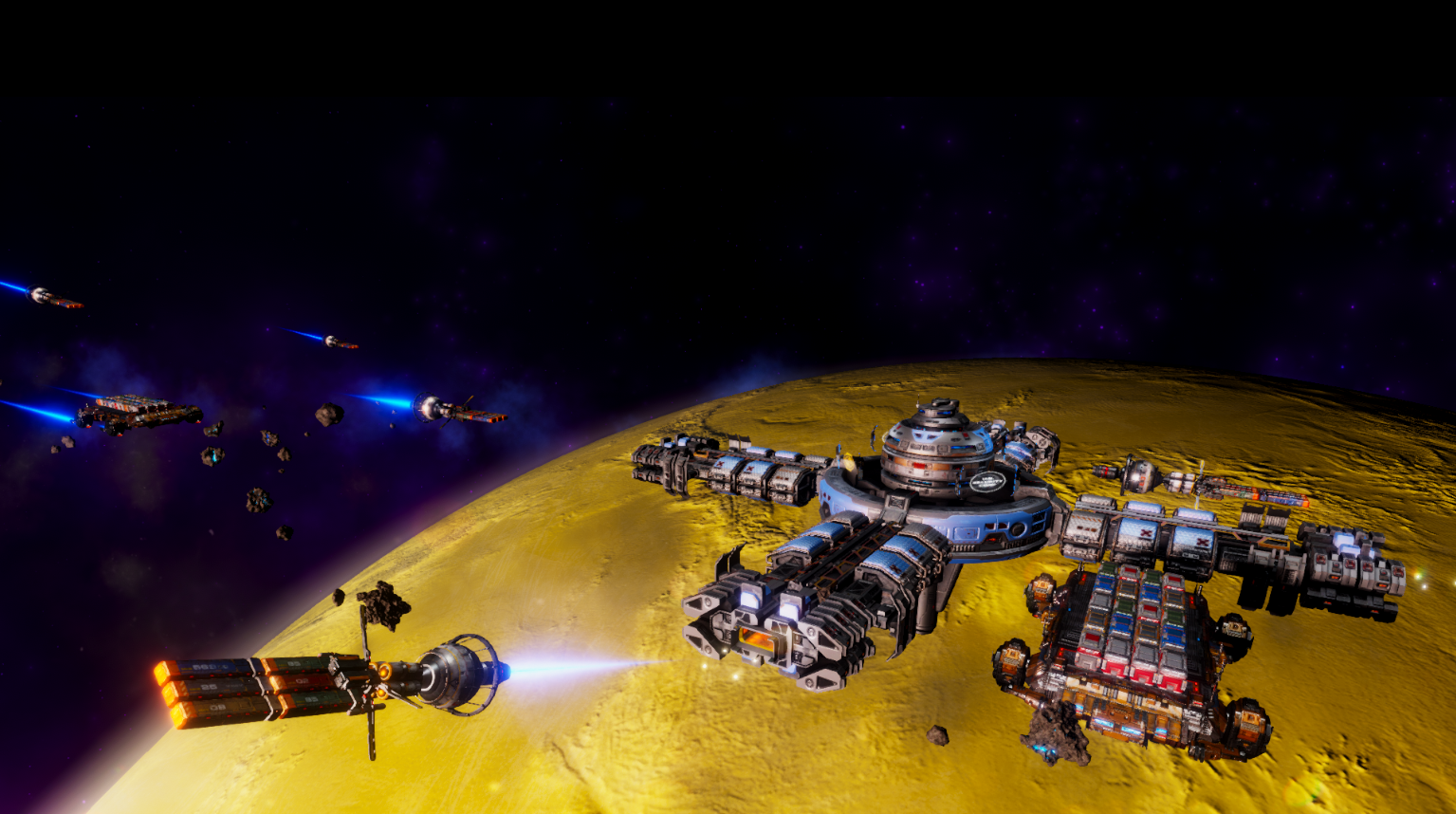 It fits nicely with existing features, in cases enhances their importance especially in the case of planetary resources and their industrial sectors.

It also broadens your options in governing your empire with new governmental actions, traits and taxation opportunities.

And who in the 4X genre do not like trade an intrical part of Exploiting the riches of the galaxy.

Big thanks to AltRon and Toryn Gent from YouTube for their feedback and covering Stellar Sovereigns on their channel!
Check them out at:

Thank you all for your feedback, it is essential
to make this game awesome as possible!

Stellar Sovereigns V0.86 update is live, introducing the third Menace faction the Machine-AI, a set of 9 technologies that can be salvaged from their...

Ambitious, both the use of Task forces consisting of a capital ship with escorts, as well as the fresh detection mechanics have caught my interest.

I'll be keeping close watch on this game

The game looks fantastic so far looking forward to seeing more in the future.

Thanks, it is great to hear master Jedi! Will post more as i finish up with more abilities. Till then, may the force be with you, and check out the game's website Stellarsovereigns.com