As a nomad making a way for yourself amongst the drifts of space you've seen what can befall an unprepared traveler. Brutal pirate raids, the inexorable tide of black holes, swarms of molten asteroids, and icy comets that blot out the suns of entire sectors. This ship is your home and you'll fight against anything to ensure it's survival. 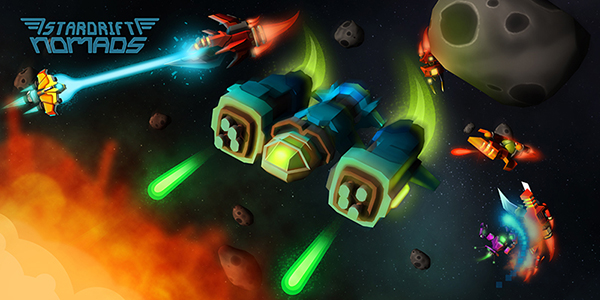 Stardrift Nomads pits 1 to 8 players against the vacuum of space and all the dangers that it contains. Players can select one of three different ship classes and work together, utilizing their unique ability and gear sets, to overcome space itself. Survive waves of pirates, asteroids, and hulking bosses that assault your tiny base and crush all adversaries to ensure its safety!

Features:
- 1 to 8 player coop.
- Three customizable ship classes, each with it's own unique skills and equipment.
- Choose your own strategy, create an ironclad defense with walls and towers or trick out your ship and become an unstoppable force of your own.
- Put your teamwork to the test and face off against a variety of deadly threats from the depths of space.
- Survive the onslaught and emerge victorious!

As everyone may or may not know the Steam Summer Sale is happening right now, and like all its peers Stardrift Nomads is on sale. As it’s our first discount, we’re doing 25% off for the duration of the Summer Sale.

In other news, we just released our first content update for Stardrift Nomads, the Nebulous Update. It includes a number of more deadly enemies, a new game mode, the Behemoth boss, and a new set of skins to beautify your ships with.

The ten enemy types in Stardrift Nomads increase in difficulty using a threat-level system with three tiers of danger. 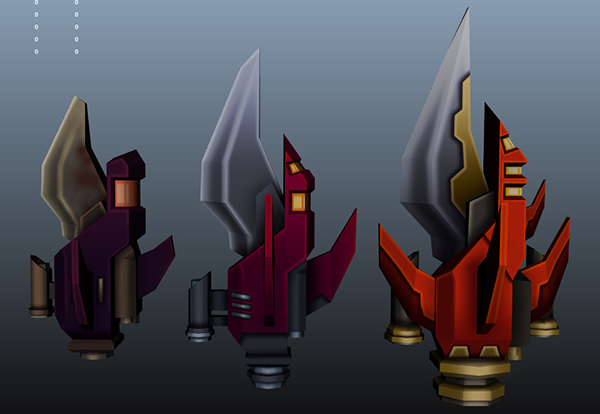 In the Nebulous update we are adding a fourth tier for each enemy type which is a super-deadly version of that particular ship class. These tier four enemies are essentially minibosses and come with special abilities that allow them to go toe to toe with players and really spread panic among even the most hardened teams of nomads. Below we will showcase each new ship and talk a little bit about what each one can do.

Scouts are generally the fodder of any pirate fleet and as such carry lighter weapons and armor than their larger counterparts, but no more. The tier 4 Scout comes equipped with a twin-linked laser cannon, heat-seeking missiles, and the ability to call in wingmen, essentially tripling their firepower for a short time.

Raiders are some of the most dangerous ships in any swarm, they come packing high-damage laser shotguns and moderate armor which makes them hard to engage at close range. The tier 4 version is even scarier with a shotgun that fires more projectiles in a wider arc and the ability to launch a barrage of missiles that can lay waste to any turrets and pilots that get in their way.

Tankers are exactly what they sound like, an indomitable chunk of metal with engines strapped onto the back, able to take the worst salvos right to the face and walk out without much more than a scratch. Tankers come with a weak weapon, but their thick armor and shield generators more than make up for this shortcoming. The tier 4 Tanker has increased armor and a shield generator with a shorter cooldown, but the real danger is their laser reflective coating which will repel any projectile that hits it. The ship still takes damage, but you see how easy it is to destroy something with every shot you fire coming right back at you. 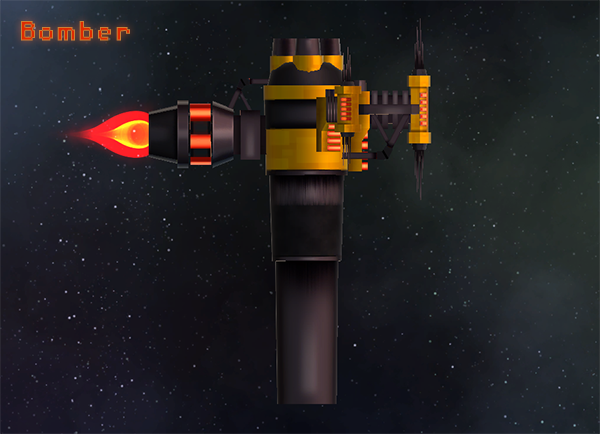 The Bomber functions as a long-range artillery platform that picks away at the colony from afar, launching crackling laser bombs over large distances. This tier 4 ship no longer needs to take the time to deploy before firing its main weapon, add that to its orbiting shield wall and powerful push ability that can blast pilots across the map and you’re going to be in for a world of hurt.

Carriers aren’t much for fighting. Lacking weapons and having both slow engines and weak armor doesn’t make for much of a threat, but being able to deploy and endless cloud of fighter drones armed with quick-firing laser cannons more than makes up for it. Tier 4 Carriers can instantaneously deploy new drones as the old ones are destroyed and each fighter comes equipped with a piercing plasma blast that can penetrate multiple targets in a line. In addition the Carrier is able to deploy a personal force field that deflects enemy projectiles for a short time, essentially making it invulnerable.

Rammers are basically just slabs of metal with a cockpit and powerful engines attached to the back. They fly at high speed and smash through anything that gets in their way, to devastating effect. The tier 4 model trades its standard layered metal shield for a set of circular saws which deal massive damage as they tear through obstacles in the rammers path. The new rammer also comes equipped with flamethrowers that leave behind a trail of fiery destruction wherever it flies.

Hunters are the unseen danger in all pirate fleets, lurking in darkness and waiting to strike at the most opportune moment. The tier 4 Hunter is now equipped with a teleporter which allows it to blink into and out of combat at will. The second you think you have one cornered it will disappear and activate its stealth ability, only to reappear behind you with guns blazing.

Flagships lead the biggest swarms of pirates into battle, granting them overshields to soak up any enemy fire. Tier 4 Flagships grant their teammates huge shields and are able to heal any damage that is done to ships in an area around them. Pirates following a tier 4 Flagship are granted increased speed and firepower making them a tide turner in any battle.

The Disabler is tasked with stunning enemies so other pirates can move in and destroy them while helpless. The tier 4 Disabler trades this ability in for a weapon that is able to scramble the controls of targets causing them to fly haphazardly into the pirate fleet. With their controls gone haywire and a rain of laser coming down on them from all directions the Disabler’s prey doesn’t stand much chance.

Rocketeers launch deadly volleys of missiles at both players and turrets around the colony, dealing massive damage and knocking out even the toughest defenses. Tier 4 Rocketeers are equipped with missiles that leave behind a cloud of damaging radiation for a short time and a nanite sprayer that deals moderate damage and scrambles the controls of any pilots who wander too close.

Stockpile is the new mode in Stardrift Nomads where the players’ colony has been disabled and must harvest energy from the surrounding area to repair itself. Players will face off against waves of pirates to capture plasma-harvesting pylons and repair their ship before the pirates overwhelm and destroy them.

It all starts with a pioneer pod. These nomads launch from the colony and fly to an energy-rich area where they can build their Pylon and begin harvesting plasma.

Once built, they will beam energy back to the colony over time for as long as the Pylon remains operational.

At the same time, pirates will try to assault these harvest points and claim them as their own. If pirates are able to destroy a pylon they will erect their own defenses around it and brutally attack any players that come too close.

The only way to emerge victorious is to construct your own defenses and closely guard each pylon until your energy meter fills and you are able to warp to a safe distance.

And finally we have added a new boss to test all you intrepid nomads out there, the Behemoth. The Behemoth isn’t complicated, it’s a massive drill, it’s heading towards your base, and if it hits it you lose. Focus your firepower and destroy this beast at all costs if you see it heading your way, but it won’t be an easy fight.

The Behemoth comes with layer after layer of ultra-thick armor and is armed to the teeth with repeating laser cannons, huge missile batteries, stun bombs, and even a black hole generator. Rev up the afterburners because this one is gonna be tough!

Get out there and play the new update everyone who already has the game, and for anyone who doesn’t take advantage of the Summer Sale discount and pick it up today!

Thank you so much for reading, we’ll let you go in a second, but first a word from our partner:

Stardrift Nomads is running a giveaway through IndieDB on Sunday, June 18th and we talk about the upcoming update.

The Future of Stardrift Nomads

Our plans about post-launch and where we plan to take the game next, along with a recap of streams/videos about Stardrift Nomads. We are planning a stream...

Stardrift Nomads is released! We have a new trailer and screenshots of our finalized game to share as well.

Members of the Risen Games team play Stardrift Nomads and talk about recent development on the game.

Clean graphics and reactive looking controls. I really like the design!