smashET is a 2D action-adventure title that is set during an invasion on Earth by a hostile alien race. Players propel cute monsters up with a movable trampoline to destroy alien spaceships in a similar style to Breakout. The game has an AI brain which learns how the player plays and will adapt the difficulty to allow players to be continuously challenged but keep it a fun experience.

Winsche Studios has proudly announced that its smashET game is design to help with anxiety disorders by introduction of binaural beats to the games music. The most recent study published by the US National Library of Medicine, shows that monaural beats are significantly more effective than binaural beats. This key study completed in May 2017 sustained Winsche developers in thinking that the monaural beats are increasingly more powerful than binaural beats. The studio’s aim is to ensure that they deliver disruptive innovations to gaming and digital applications. smashET delivers exactly what it says on the tin.

The report by Leila Chaieb and colleagues indicates high effectiveness of “monaural beat stimulation in treating symptoms of anxiety disorders, in a fast and non-invasive manner.” 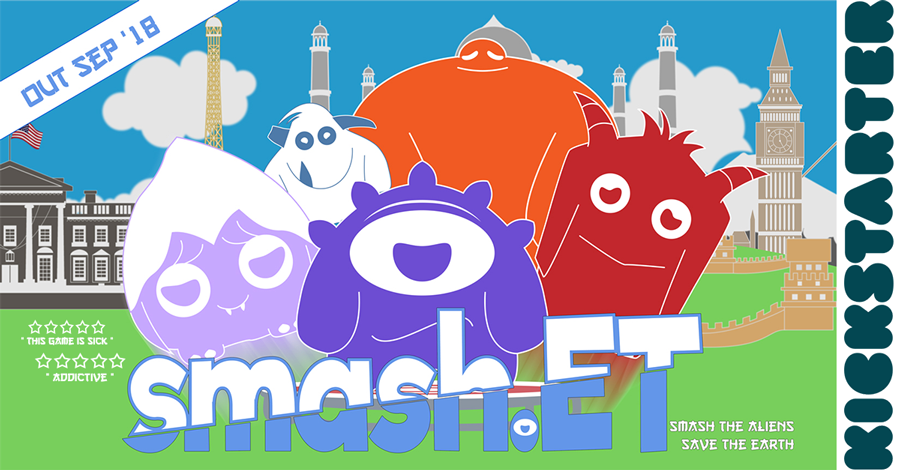 “We aimed to target states related to anxiety levels and general well-being, in addition to long-term and working memory processes, using monaural beats. Responses for the individual beat frequencies, positive effects on state anxiety were observed for all monaural beat conditions compared to control stimulation.”

smashET is 2D action-adventure featuring alien’s invasion of the earth. The player launches monsters up to the air, with the aim to hit and destroy the alien spaceship and stop the invasion. By controlling the trampoline for the monster to bounce off, the game creates a stimulating and fun environment for the player. The game’s AI learns how players interact with the game and adapts the difficulty level to ensure the gameplay is stimulating and challenging.

“We approached this game design from unusual angle. We started by understanding how colour, shapes and music affects human mind. Obviously, we had general idea for the storyline, yet we did not want to get boxed in the initial conceptualisation.”

Winsche Studios consulted and worked with world renowned scientists and designers to understand how to best design the game to deliver the best possible experience. The game will have options for the player to select their own music for the mood they want to set themselves up.

It is innovative, unique and ground-breaking approach”

The game will start its Kickstarter campaign on 02/07/2018 to raise funds to support the launch.

About Winsche Studios
Winsche Studios is the UK-based, small game development studio delivering new angle on gaming experience. “We do not want to just design games, we always start with the experience”, says studio’s founder Adam Winczewski. His passion for coding, designs and video games, enabled him to transform hobby into new age development studio. State-of-the-art AI engine called ODY is imbedded into games, making each gameplay one of its kind. smashET is the new release, where you will be able to experience ODY power.
To learn more about Winsche Studios, please visit their website.