The next major update to our role playing game, Slave RPG is out now and officially marks the beginning of the beta!

The next update in our upcoming title Slave RPG is out now and features new additions to gameplay with changes to overall mechanics to help flush things out and bring us into the beta. 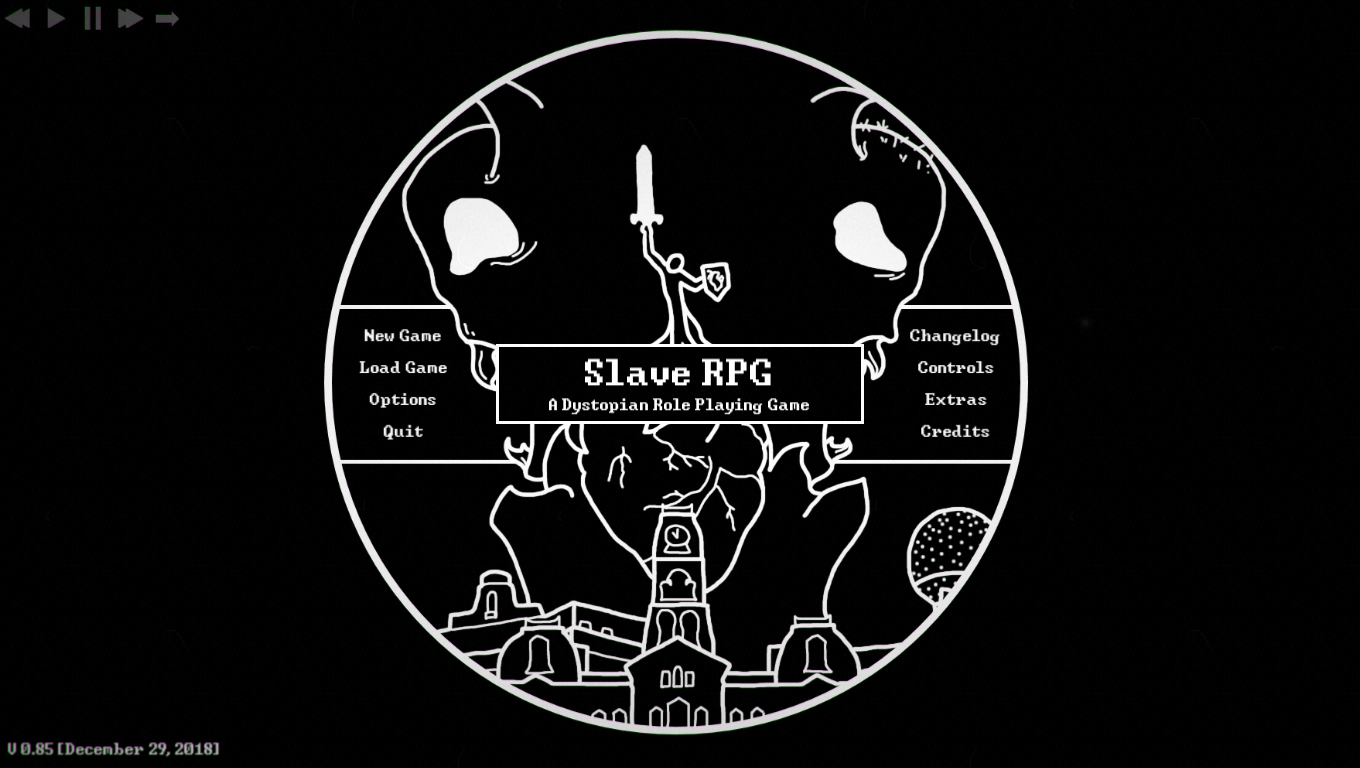 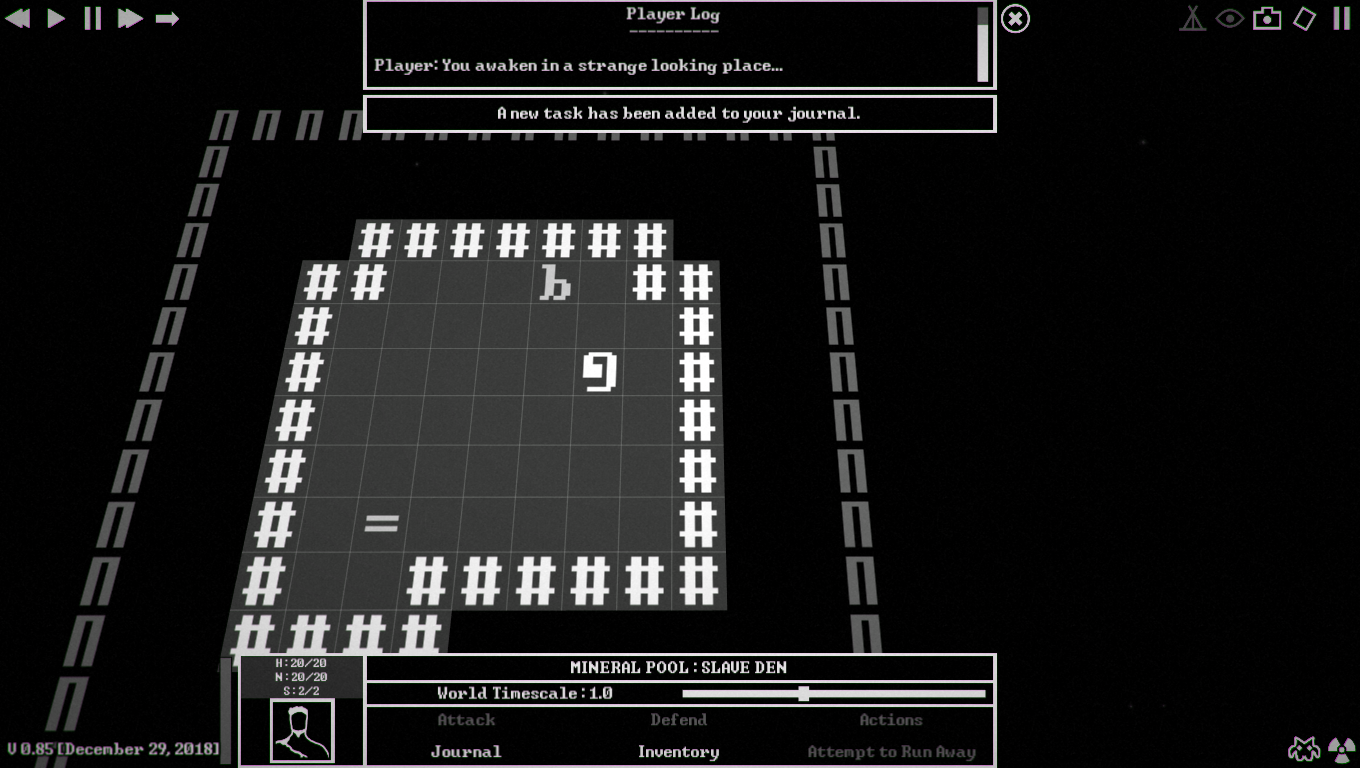 The battle log for a while was one of the only ways for player's to get direct feedback on their actions, and even then it was pretty obviously limited to combat. With this update, we have expanded on the battle log concept and added a full player log that will give feedback on numerous actions taken in the wasteland. Some things are yet to be supported with the log, and as we add in more to do in the last few updates before release, the player log will receive more support as well. 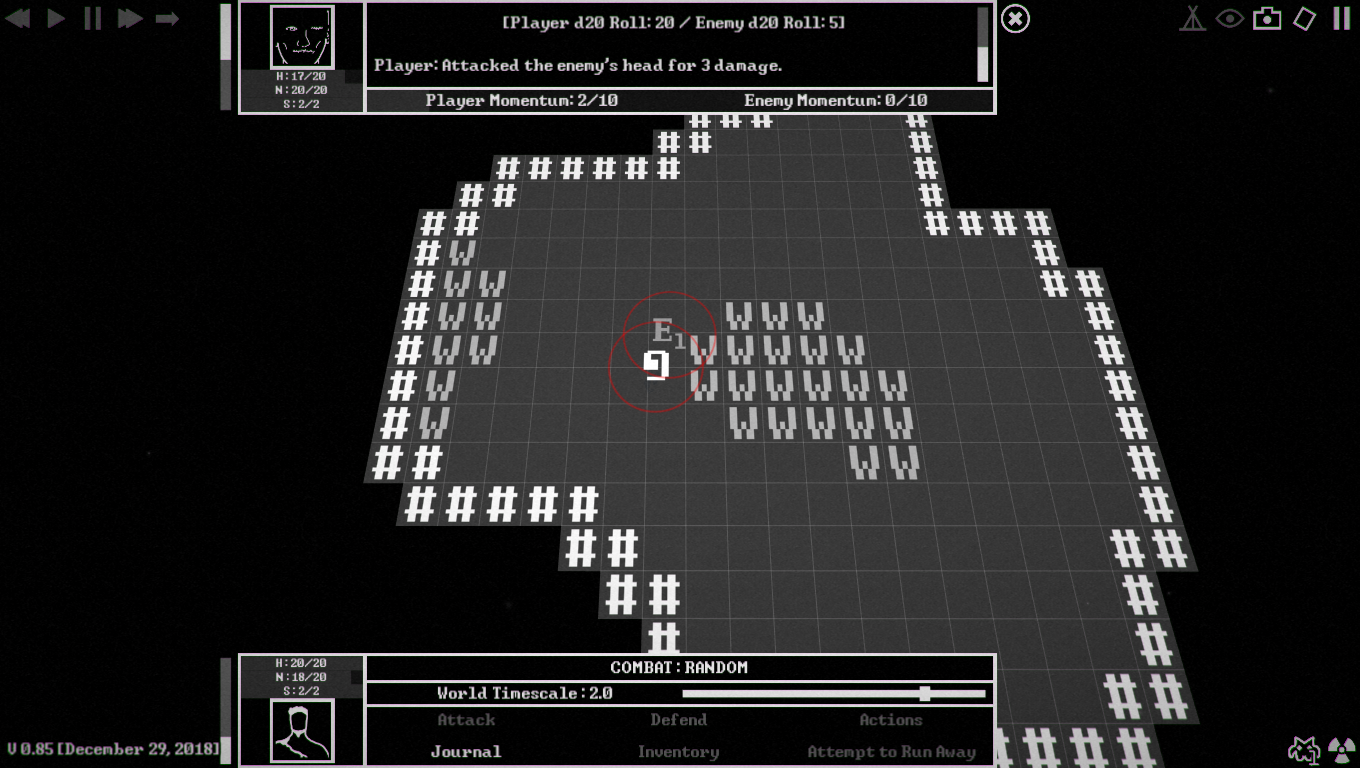 The way that hit probabilities had worked previously was needlessly complicated and poorly explained to the point that it would take much too long for us to change even the smallest things in combat without finding a work around for it. SO, in this update we have completely reworked hit probabilities to be simplified and easy to understand in a uniform manner. Hit probabilities are now determined by flat d20 rolls for the attacker and defender, and each party will receive a roll bonus equal to a scaled numeric of their respective stats. For physical attacks, player's will receive one bonus point to a roll for each 3 points of Attack that they have, the same goes for defense, as well as actions now having their own probability bonus stat based in Intellect. 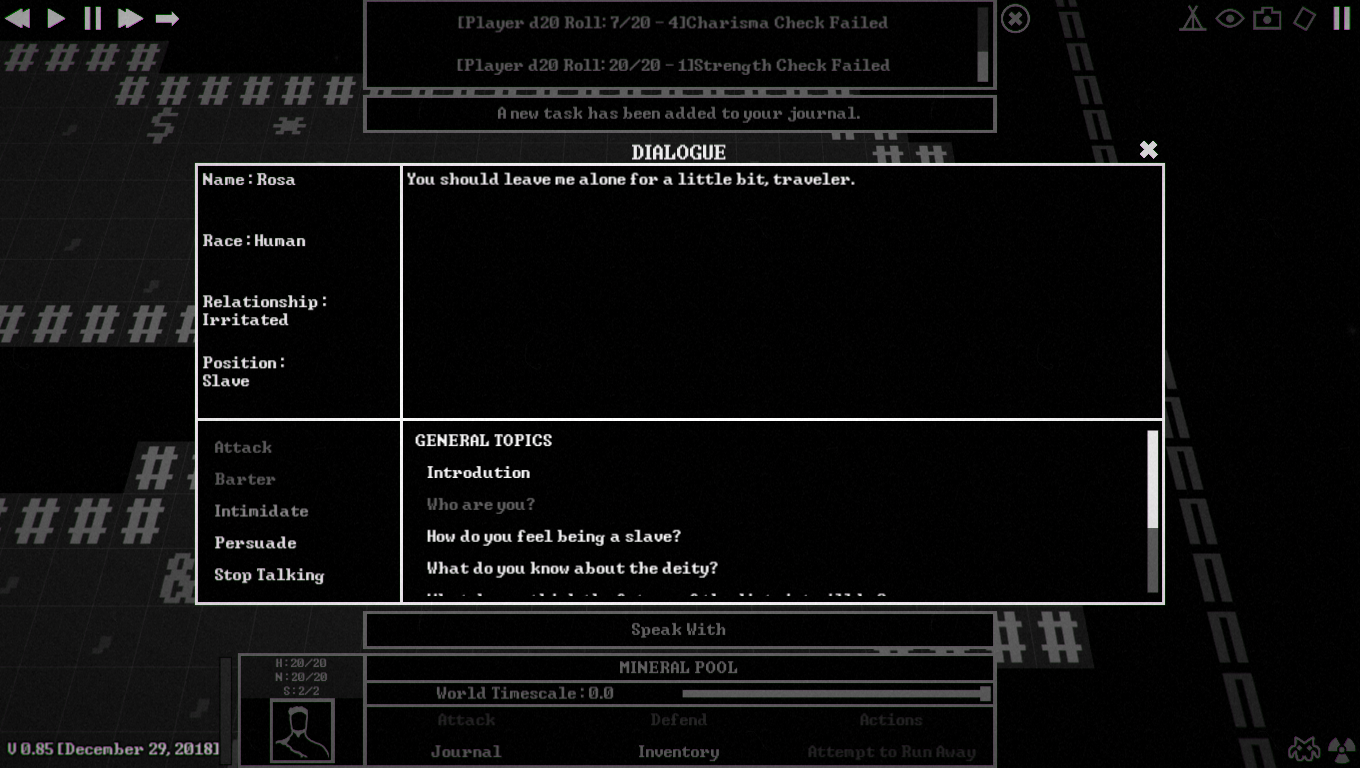 The way that stat checks worked in dialogue before was a little odd, and with the way we have set up speech in the game (which is how we wanted it, but still) it makes having a form of stat checks a little difficult. Hopefully though now it will at least look a little more uniform and now give player's direct feedback as they can attempt to intimidate or persuade NPCs at any point in time during a conversation. However, if a player fails either of these stat checks too many times, NPCs will go into an "annoyed" state where they will not talk to the player for a few days until they have calmed down. 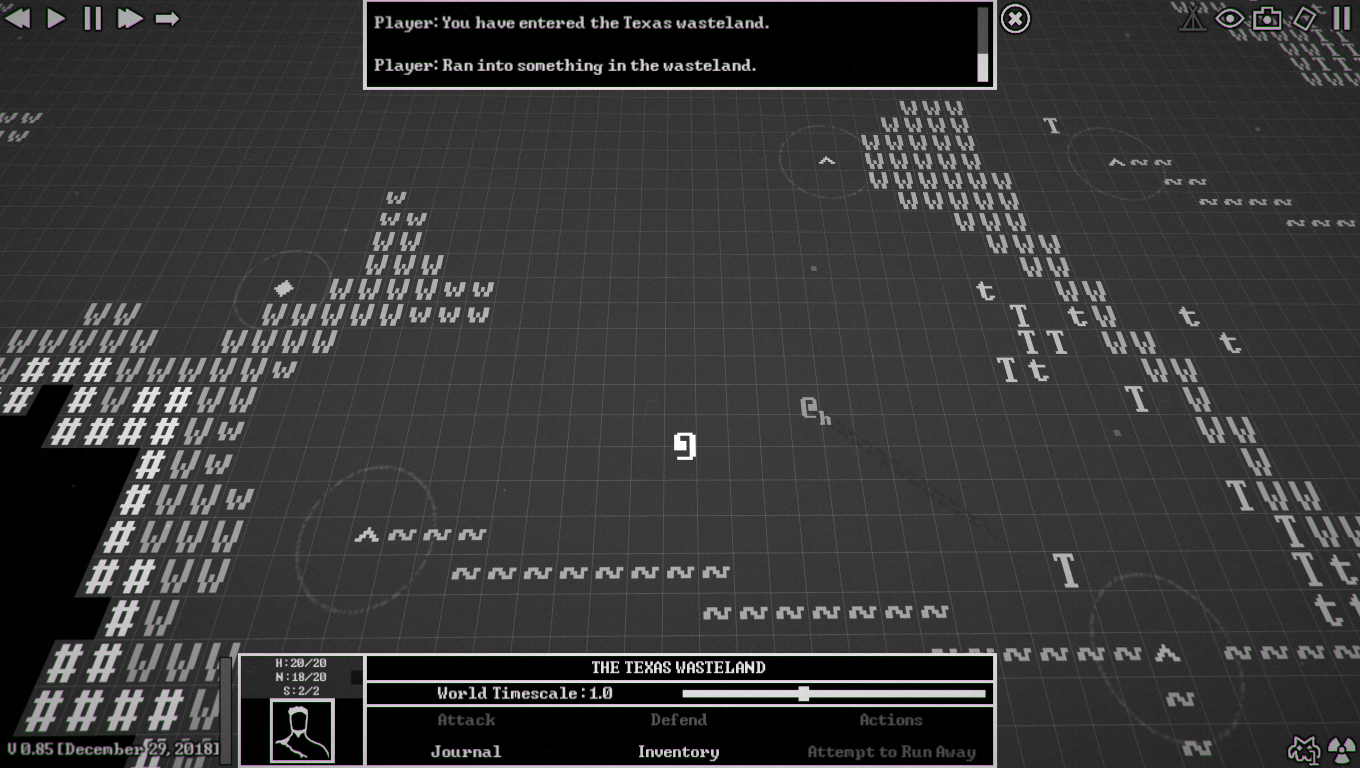 We have also been trying to clean the game up a bit in preparation for adding the last few "larger" components of gameplay. This includes things like detailing the logs more, to adding uniform exit menu buttons at the top-right of all menus, to adding newer little touches to the world map in having NPCs move around in real time from town to town. 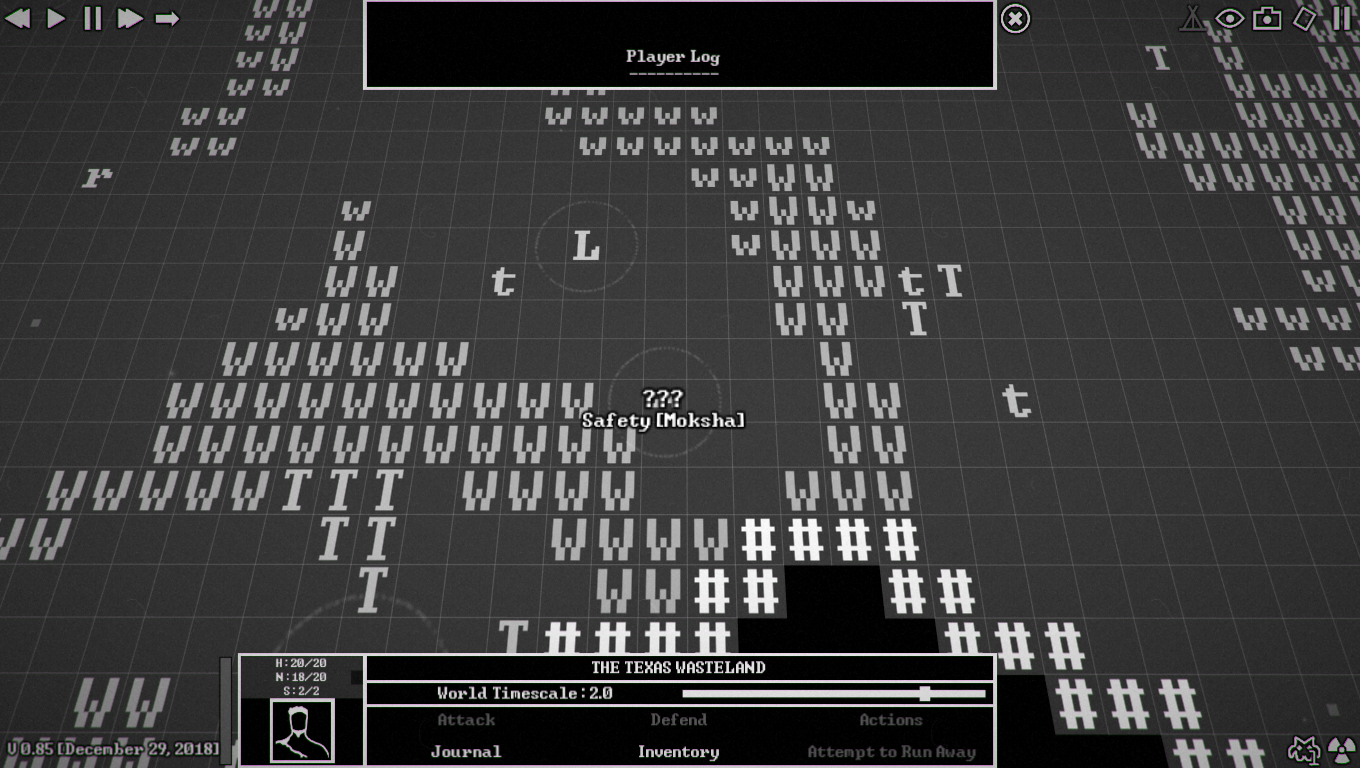 In the next few updates it is unclear if we will make the releases public, but we will continue to make monthly posts to keep everyone up to date with what is going on in the game. As for future additions/changes, we would like to add in dungeons (abandoned cities/towns), allow players to finally trade items with NPCs, and add in a few new jobs to do in the wasteland that we keep adding support for in every other update.

We would like to thank you all for seeing us into the beta of the game and wish that you all have had a good holiday season! (Sorry we were a day late with the update, I had just so decided to come down with the flu.)