The legendary Serious Sam reloads and rearms in an explosive, turn-based RPG developed by indie developer Vlambeer (Super Crate Box, Ridiculous Fishing). Serious Sam: The Random Encounter follows Sam and his band of oddball mercenaries as they battle across a pixelated world teeming chaotic battles, hordes of bizarre creatures, and mysterious secrets. Choose your weapons and take aim at the most random Serious Sam adventure yet!

The first surprise pack, the Serious Sam Lightning Pack, is available to buy immediately, with a starting price of $2.99 and a total of six Serious Sam-themed games, including four new indie-developed games riffing on Croteam's gonzo FPS franchise, plus the two original games in the series. 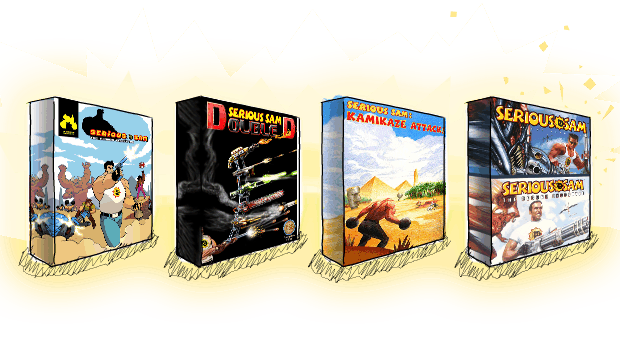 Serious Sam's recent indie spinoffs were commissioned by rogue micropublisher Devolver Digital and franchise creator Croteam (still an independent developer themselves!) around the launch of Serious Sam 3: BFE, but gained some notoriety thanks to their entertaining spinoffs of the shooter franchise.

Of the previously available titles in the bundle, Serious Sam: The Random Encounter -- available on PC as a DRM-free download, on Steam, and on Desura -- is a refreshing take on the RPG genre, developed by acclaimed indie developer Vlambeer (Super Crate Box, Ridiculous Fishing). Its gameplay is a clever pixelated hybrid of turn-based battles with real-time, run and gun offense and defense maneuvering.

Also part of the pack, Serious Sam Double D -- available on PC as a DRM-free download, on Steam, and on Desura -- is a hand drawn, side-scrolling shooter featuring over-the-top gameplay and chaotic action from arcade-loving indie Mommy's Best Games (Weapon Of Choice, Explosionade).

Next, making an exclusive debut on PC in this Lightning Pack is a DRM-free download and Desura PC version of Serious Sam: Kamikaze Attack. Developer Be-Rad Entertainment's offering (originally available exclusively on smartphones) is an Canabalt-style action-platformer where players control the Headless Kamikaze enemy, striving to accomplish the bad guy's dream of blowing up the vile Serious Sam on every level.

Finally, as a world exclusive Indie Royale debut, Serious Sam: The Greek Encounter is an 8-bit, top-down "demake" of Serious Sam, specially commissioned by Team Fortress Arcade and Halo/DJ Hero demake author Eric Ruth. It's available for PC as a DRM-free download and on Desura, and sees Serious Sam in ancient Greece battling the relentless hordes of Mental's army in an all-new retro 8-bit adventure.


This new Lightning Pack will run for just 100 hours, under the same pricing model as before: the price will automatically increase as more people buy the pack. Those generous buyers who pay more than the current minimum can decrease the price for other purchasers.

me too hopw linux version will be available for it

Good stuff, would love to see Linux versions for first & second encounter though (and others if available) :)

I lover Croteam for their games and great promo stuff, just remember how much time SS was on sale. Great Games + Great Devs = Insta win.

This is a really great bundle. Even though I already have DoubleD I still bought it. I do get a kind of financial "fatigue" a bit, though. And seems there is just one week until the next bundle...

By the way, I have just discovered that GOG sells SS First and Second Encounter DRM-free direct downloadable. So I am a bit sad we only got the Steam-keys with the bundle (yes I like my games without DRM, thank you).

This one wasn't so great. Greek Encounter is easily the worst of the bundle by a mile, Kamikaze Attack had potential, but the menu music was REALLY repetitive and the game gets old long before you're halfway through. Might be more enjoyable on my phone, but unfortunately there isn't an APK of the Android version included, at least not yet.

I bought this pack for Double D and Random Encounter, and they're certainly the best of the indie games so far. Nothing I'd recommend to a friend, mind you, but worth what I paid for the whole pack, more or less.

Despite already having First and Second Encounter on both GOG and Steam (as well as the HD versions), I'm still disappointed that the version on Desura requires activation on Steam. The game is available DRM free on GOG, and possibly elsewhere, so why isn't it DRM free on Desura? I notice the publisher for GOG is Devolver Digital, while the publisher on Desura is Gathering of Developers, so this might have something to do with it. If that's the case, why didn't Devolver publish it on Desura?

And the HD versions, if those were included, I would have forgiven for requiring Steam, but introducing them to Desura without DRM would've really made this bundle worthwhile. Instead, not only were they absent entirely, the original games require Steam...

Overall, I really can't complain, since I got my money's worth and it was a great value for anybody who doesn't already have the original Serious Sam games (even if you DO have to play them through Steam), but I'm hoping for better in the upcoming Valentine's Bundle other future bundles. Games that have Linux versions, music (Aside from the first one and this, Indie Royale has been pretty good about music, even offering FLAC with most of them. I already have the Serious Sam music from GOG, but still. This bundle was just holding too many punches!), Android APKs for games that have Android versions, and lots of great games. That sort of thing. :P