The famous 80/90's brawler genre is the main inspiration for SATURDAY TWELVE. The idea is to bring all the action of a genuine side-scrolling 'beat'em up' combined with 3D graphics and the Unreal Engine resources.

SATURDAY TWELVE is inspired by blockbusters like Capcom's Final Fight™ or SEGA's Streets of Rage™ amongst other famous games that made our childhood really fun and worthy.

The game will feature a very interesting melee combat system, with fast and simple controls and a random combo system. So even if you press the same buttons for a combo, the moves will be always different. The classic special attacks are also included and they will be useful once you see yourself surrounded by large groups of enemies that has no other goal than seeing you in pieces. A great variety of weapons like knives, baseball bats, pipes, katanas and even throwable objects like tires, barrels and grenades (!) will also be available to spice things up.

You'll be able to choose between 3 main characters (each character with different moves, strenghts and weaknesses) and then, you will start your journey trying to cross a city infested with hundreds of criminals, street gangs, evil cops and professional killers hired specially to hunt you. Ah. And the infamous bosses at the end of the levels, of course.

Classic movies such as Warriors and Streets of Fire are also an inspiration. We thought about aliens, mutants and zombies, but in the end, street gangs are a kind of copyright in this genre and also very fun, since we can make enemies with a lot of personality. Furthermore, this will reinforce our intention to pay tribute to the several beat'em up games that came before Saturday Twelve.

WHY THIS NAME 'SATURDAY TWELVE' ?

Saturday Twelve is supposed to be a name given to the day where all the events of this game will happen. It's like a code to describe that day, such as 'nine-eleven', or 'Day D'.

The plot is not a priority when you're thinking about making a side-scrolling brawler, but even so we thought something different from the 'girlfriend was kidnapped by evil gang and now you need to hit the streets to save her' plot, very common in these kind of game.

Somewhere in the 90's, a violence outbreak happened in the night of Saturday the 12th, organized by a big crime boss and directed against security forces and a few civilian targets. During 24 hours, all the city gangs and criminals attacked the police and attempted to kill important people like the mayor. A violent situation arose, creating a clash between law enforcement officials and criminals. The playable characters are former gang leaders and a retired cop, and they'll play an important role in this event.

So far we have 2 characters planned: Roxy (a female street punk and former member of the gang you are supposed to fight against in this game) and Tyrone (a retired cop).

As said above, they'll have a great variety of moves, a random combo system and other moves like flying kicks, sprint attacks, spin attacks etc. We are also considering a counter attack system, where your char would block the enemy's attack and imediatelly counter attack, leaving him vulnerable to combos.

We are also planning a kind of 'damage' system, where your char would look more and more 'messy' as the game goes on and you lose lives. After losing a couple of lives you'd notice your char bleeding with a black eye and broken nose. Also their stances and the way they walk would change.

We will make several different classes for the enemies, with different AIs for each one of them. From your everyday streetgang thug that will use nothing but his hands and feet to hurt you, to skilled enemies that can block your attacks and use weapons. Their health and looks will be also different.

Every class will feature a random color system. So even if they look the same, their clothes will be different from each other and you'll rarely see two of them alike. Their names will also be randomly generated. The only exception here are the bosses. They'll always have the same looks, colors and names.

To increase the immersion, all of the chars (playable and AI controlled) will talk. They'll talk to each other, curse each other during the fights and even compliment the player or praise themselves for a nice combo or attack they performed. If they're hurt they might complain about it too.

The game will feature an Arcade Mode, that will work like any brawler game. While playing the Arcade Mode, you'll be able to collect money from enemies you defeat to buy food and increase your health, buy extra moves or update the moves you already have, and even buy extra lives and continues; after you finish your game, the spare money can be used in a Shop. This Shop will feature tons of things: from new costumes to extra characters. Other modes will be a Boss Rush mode and Survival mode (both needs to be unlocked).

We've been working on Saturday Twelve for almost a year, but there's still much to be done. We have a playable game by now, enemies with average AI and a working system for the HUD (similar to the brawler games, displaying the enemy's health).

We have Roxy modeled, rigged and we are starting her animations. As for the enemies, so far we have two different enemies of the same class, and we are working on a 3rd one. We also have 6 levels pretty much done (out of the 21 levels we are planning to make).

Most of this time we had only 2 people working on the project (one making the scripts and 3D models, and the other working on the level designs, textures, kismet and the art related to the game). We also have very nice people aiding us with the ambient sounds and other things. We also hired professionals for some tasks, like songs and voice acting. A while ago an animator joined our team. 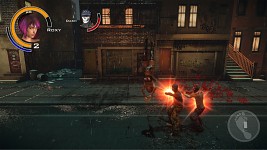 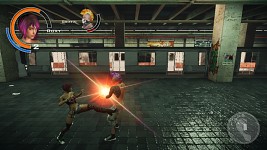 These images show some of the Roxy's new animations: the spin attack, the flying kick and also a powerful kick. We are going to post a video showing these new animations later this week as we are still finishing some of them. 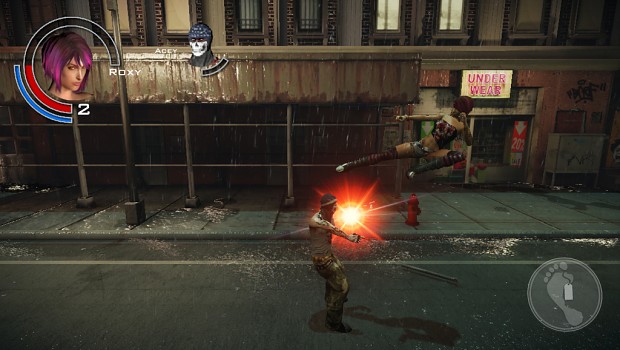 We've also added descriptions in some of the images with extra explanation about the game content (like the Extra Content menu), so make sure you check them all out. :)

The atmosphere is fantastic. I can't wait for play the demo version , hurry ! :)