Sailors of The Sky

Nine islands on and over the edge of the world. There used to be ten...
With a crew of ten soldiers you take control of the Aeronef, a ship that floats in the sky. On your way to revenge the destruction of your island. Visit the neighbored islands to figure out who was behind this.
Airships, floating islands, cannons and swords. This game takes your fantasy literary to the edge!
RSS Articles

Rendaq :: The guy that keeps his head cool

This time, as promised, finaly a game character. Rendaq! If there is one guy who can keep his head cool while bullets and cannon-balls are shooting around his head.

On a day free sunny weather and fresh air it took me 6 hours of hard work to design and model this character. But then you've got something! Rendaq is one of a kind. Waving around with his big-ass shotgun, never afraid of anything. If you are on the wrong side and you meet him before diner, I'll be sure you never had a biger problem in your live. 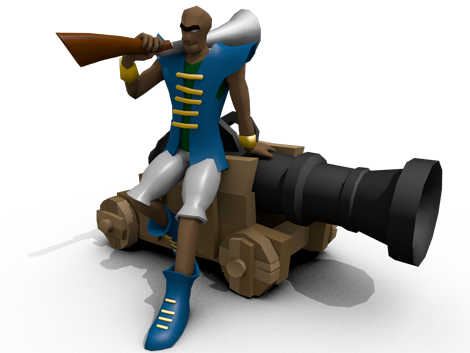 Rendaq how he will appear in the game.

I started this model from scratch, I had a few sketches on paper but not worthy enough to be called concept art. So the main idea was in my head. I began with defining the torso, putting the main shapes about how I wanted the jacket to be from my head in the 3d space. Then I worked from in to out by first modelling the arms and legs. After that came the more detailed parts as the head, the feet and the hands. After giving everything some color I applied a basic rig (skeleton used for animating) to the model to put it in a nice pose. This pose was actually the same as I had in my sketches. And voilà there you have your character. 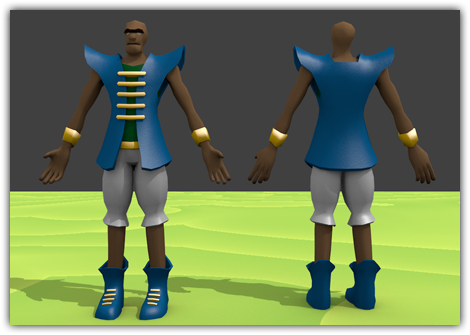 A non rigged view on Rendaq's front and back.

Next up I think I will be working on some envoirement like trees, grass and flowers. So look out for it.
Thanks for your intression!

I did some sketches and started on the island Lyndiath.

Break time is over, I'm back!

After a break of some time, the project of this game is finally going again! I did dome rethinking about the game and I have decided to go over to cartoon...

Welcome at the edge of the World

Living on the edge of the world, you have to take control of your airship, the Aeronef. Solve the mystery and destroy your enemy.

The 7.30 incremental patch for Sailors of the Sky.

The 7.29 incremental patch for Sailors of the Sky.

The 7.28 incremental patch for Sailors of the Sky.

The 7.2 incremental patch for Sailors of the Sky.

The 6.43 incremental patch for Sailors of the Sky.

This looks good so far. Love the images and the concept. You've got one more tracker.

Welcome to the NeoAxis community! I hope your game ends up awesome!

Wow, I love the concept, tracking!

Tags
Embed Buttons
Link to Sailors of The Sky by selecting a button and using the embed code provided more...

The Tower of Beatrice Adventure