First, let us say a huge thank you to everyone in the RobocraftX community for some of the incredible games you’ve built with the very limited set of components we’ve given you so far. Your creativity and ingenuity has amazed us. With this announcement we’ll be covering a whole suite of new upcoming features that are designed to give you Creators the parts you need to begin to turn your creations into compelling pieces of content, and to enable you to self publish them for others to download. We’ll also be announcing a change to the name of the game and an announcement about pricing.

First up, we'll give you the lowdown on the suite of cool game creator features we’re adding: 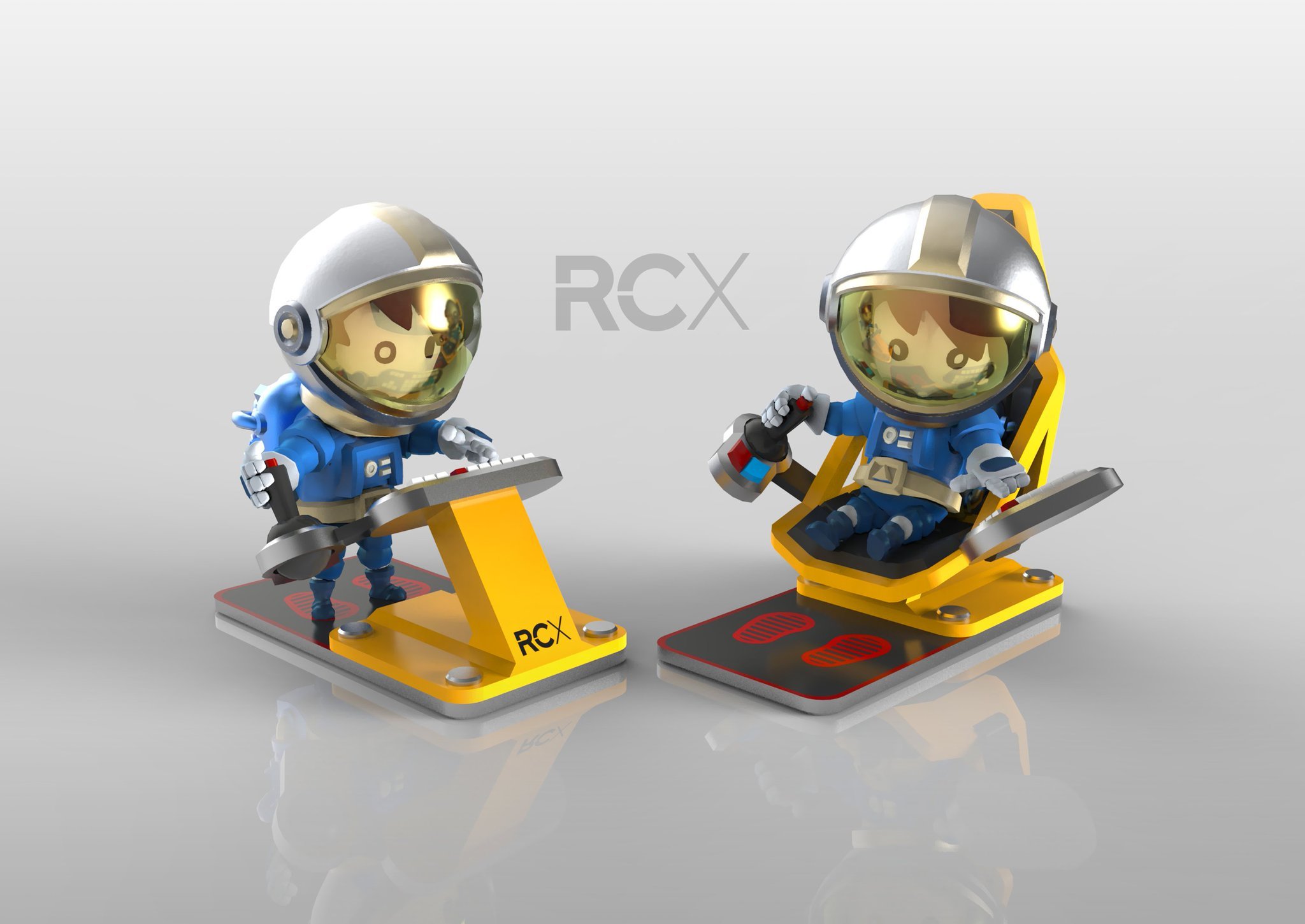 The Pilot Seat, Passenger Seat and Control Panel are parts that you can put on any creation. You can put seats anywhere, even on ceilings and walls. 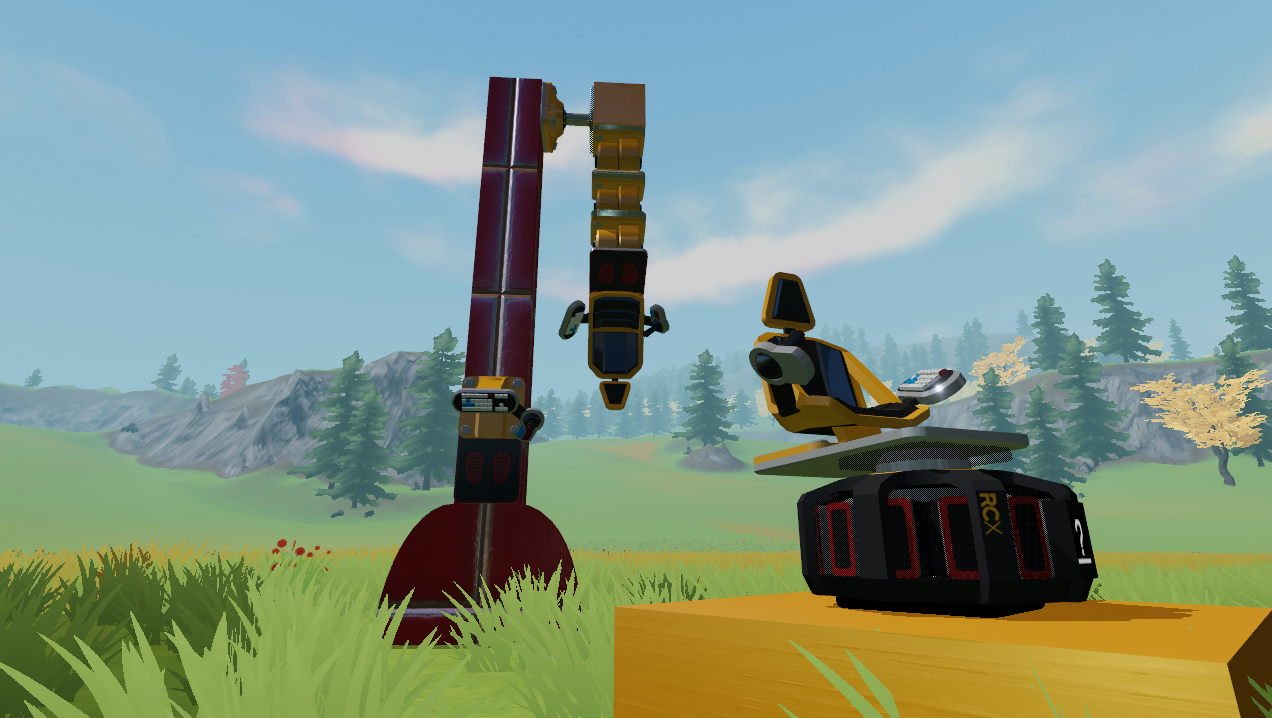 Leo can use/sit in the seat by left clicking when the crosshair is over it (i.e. this is how you ‘use’ things in RCX). As long as you have a line of sight to a seat you can get in it. When in a seat you push ‘E’ to exit the seat again.

When in a seat you are seat belted to the creation/vehicle so you move where it moves. The seats come with special cameras too. When in first person, if your seat goes upside down, then you see the world upside down. The Pilot Seat and Control Panel have two different 3rd person cameras. The Pilot Seat’s camera works like classic Robocraft so you can view vehicles with the Alt+MouseWheel controlling zoom distance. The Control Panel will always keep character in view, so if an object gets in the way it will move forwards closer to the character. These different behaviours are useful in different scenarios.

Pilot Seats and Control Panels allow you to assign keyboard and mouse input actions to functional parts that are connected to them (via conductivity and signal channels). You can configure Motors and Servos (and anything else) to respond to the player’s input when in a seat. It’s pretty easy to rig up cars, cranes, etc. using them, but it’s also possible to rig up some incredibly creative controllable contraptions using the same system. The seat even sends a signal when you are simply sat in it, so you can make cockpits close and doors open automatically when someone sits in the seat. 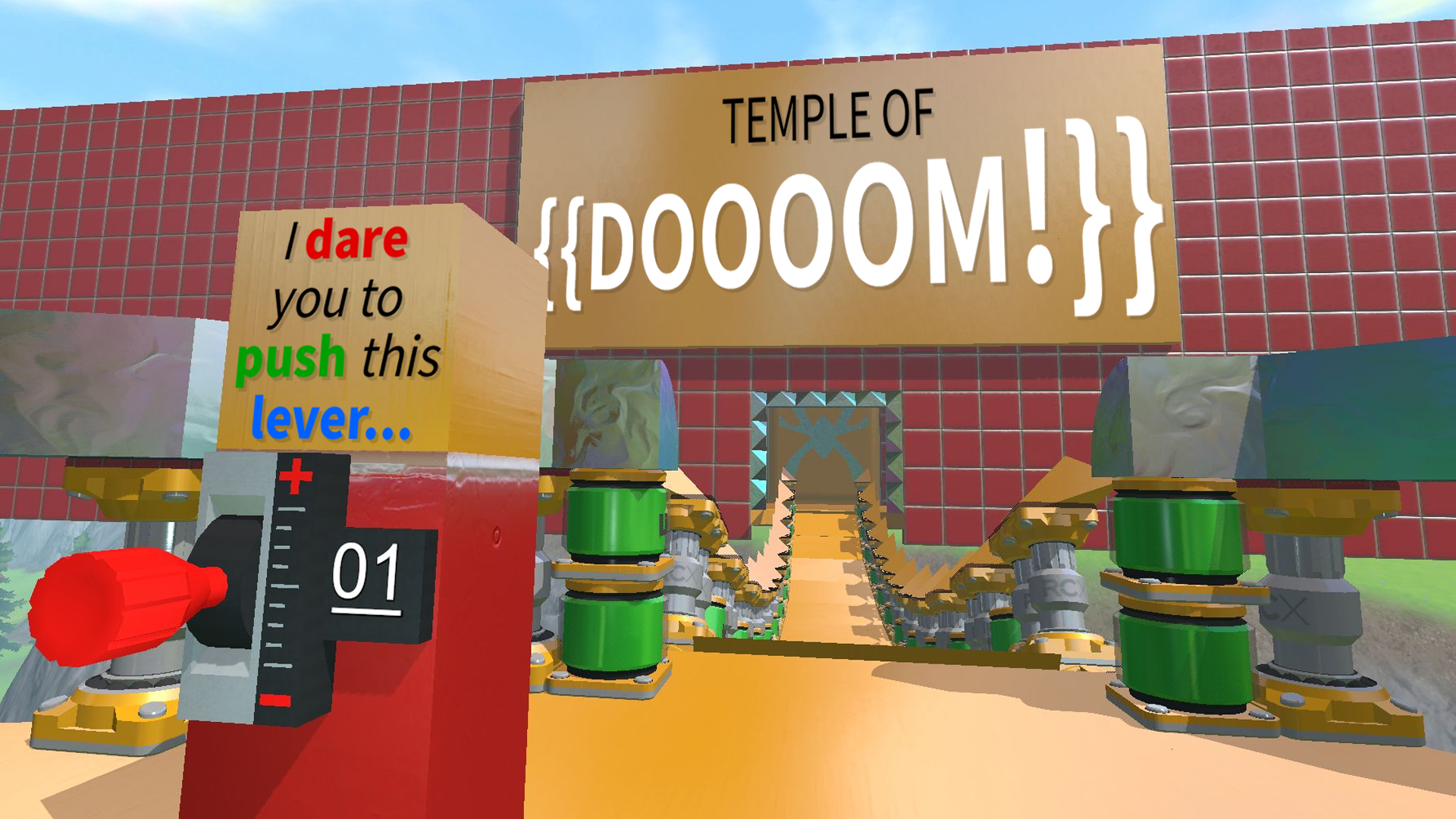 The Text block is a scalable block that can be scaled from 1x1 to any size. When you place it in the world a UI pops up allowing you to input text on it. Using rich text tags you can set variable font size, colour, italic, and bold.

You can mount the Text Block on anything, static things, walls, and moving things like vehicles.

You can also give each Text Block a unique ID. Using the command console you can issue a command that can update the text on any Text Block in the world at run time. Read on to find out how the Script Block can be used to trigger console commands to change text whenever you need in your games. 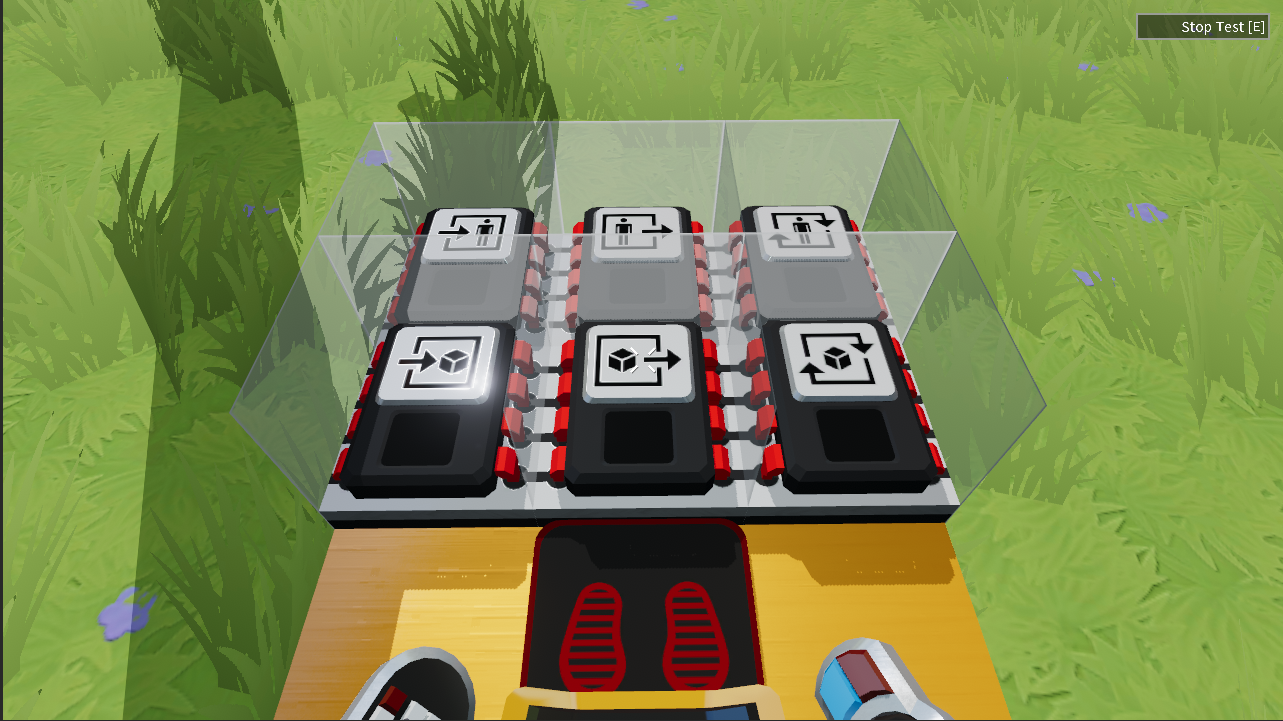 We’re adding Object and Character Triggers too. Triggers are microchips that you put on your creations and then scale to define a ‘trigger volume’. Trigger volumes can be overlapped which you’ll find very useful for complex creations. Triggers are visible when building games, but not when playing games, so your players won’t see them when they play your games.

There are multiple trigger types, ‘OnEnter’ sends a pulse signal on anything connected (via conductivity) each time something enters it. ‘OnExit’ is similar but sends the signal when something exits it. The ‘OnStay’ trigger sends a continuous signal when anything is inside it.

You can rig up movement parts like Motors or triggerable parts like Script Blocks to the triggers to create various gameplay behaviours such as:

Using these triggers you can:

The Script Block is akin to the Command Block in Minecraft, but it works with all the wonderful physics in RCX. A Script Block placed on the same conductivity cluster as any signal sender can respond to it and trigger console commands. This means you can do stuff like: 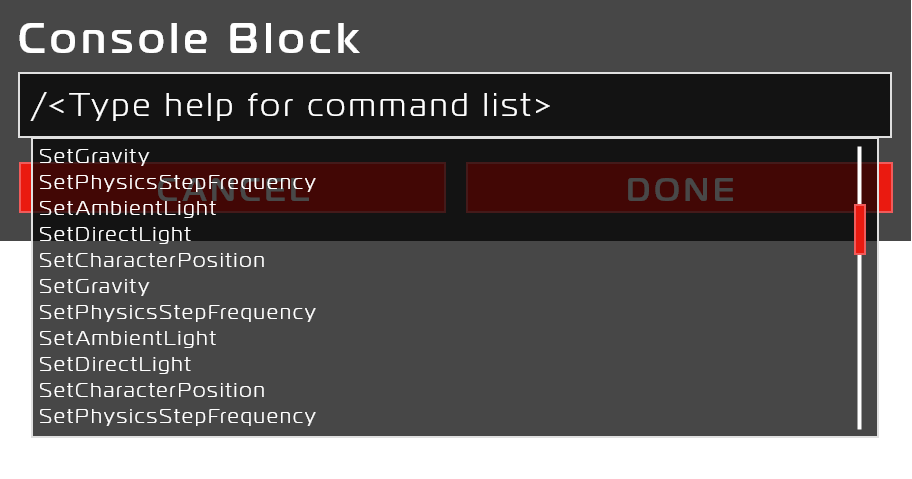 As you can see, the RCX build system is really going to step up a gear with the addition of the Pilot Seats, Triggers and the Text and Script Blocks.

We’re adding a proper save game system. At any time you’ll be able to save the game and you can have as many save files as you like. 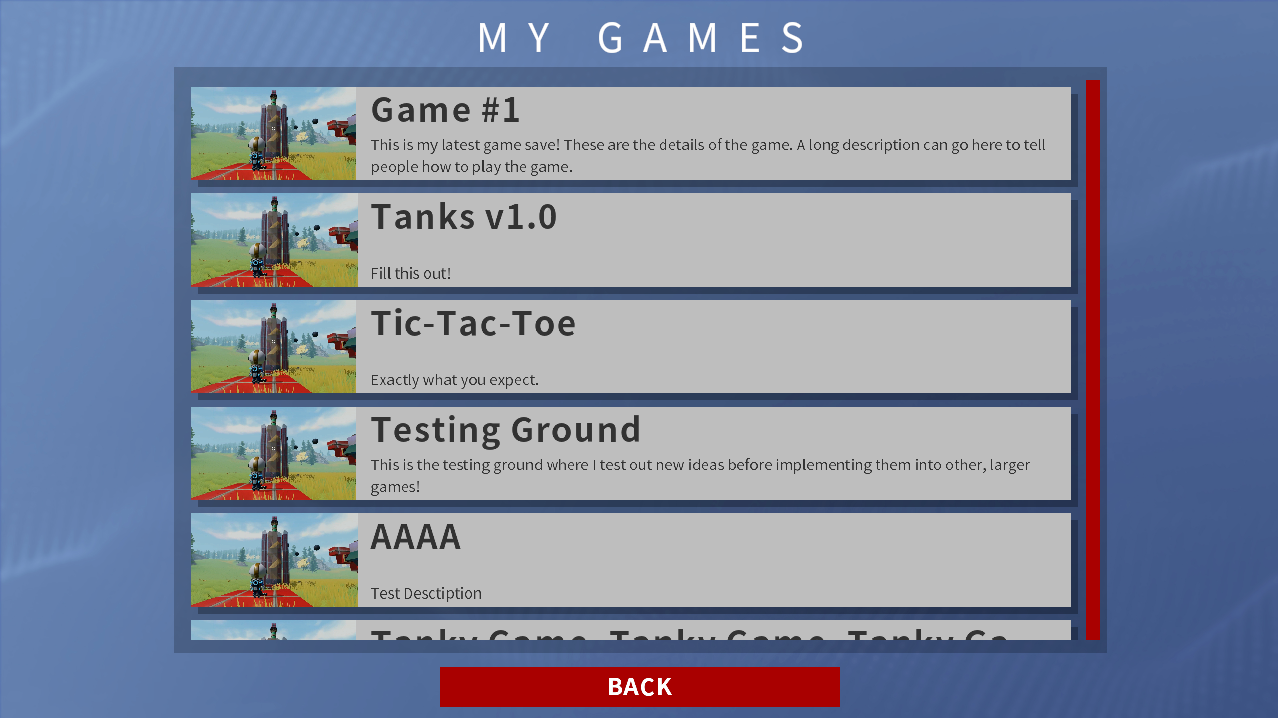 When you save the game you’ll get a Screenshot Taker so you can save a cool thumbnail image, you can give it a Title and Description. 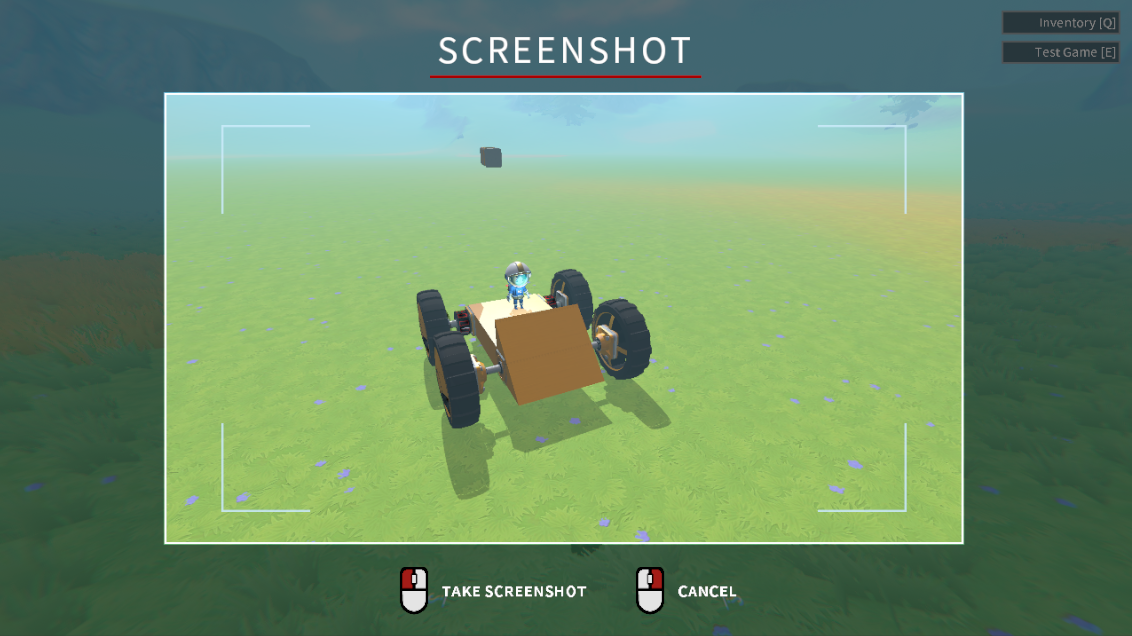 You can edit, delete, and update any of your saved games at any time via the new ‘My Games’ screen. 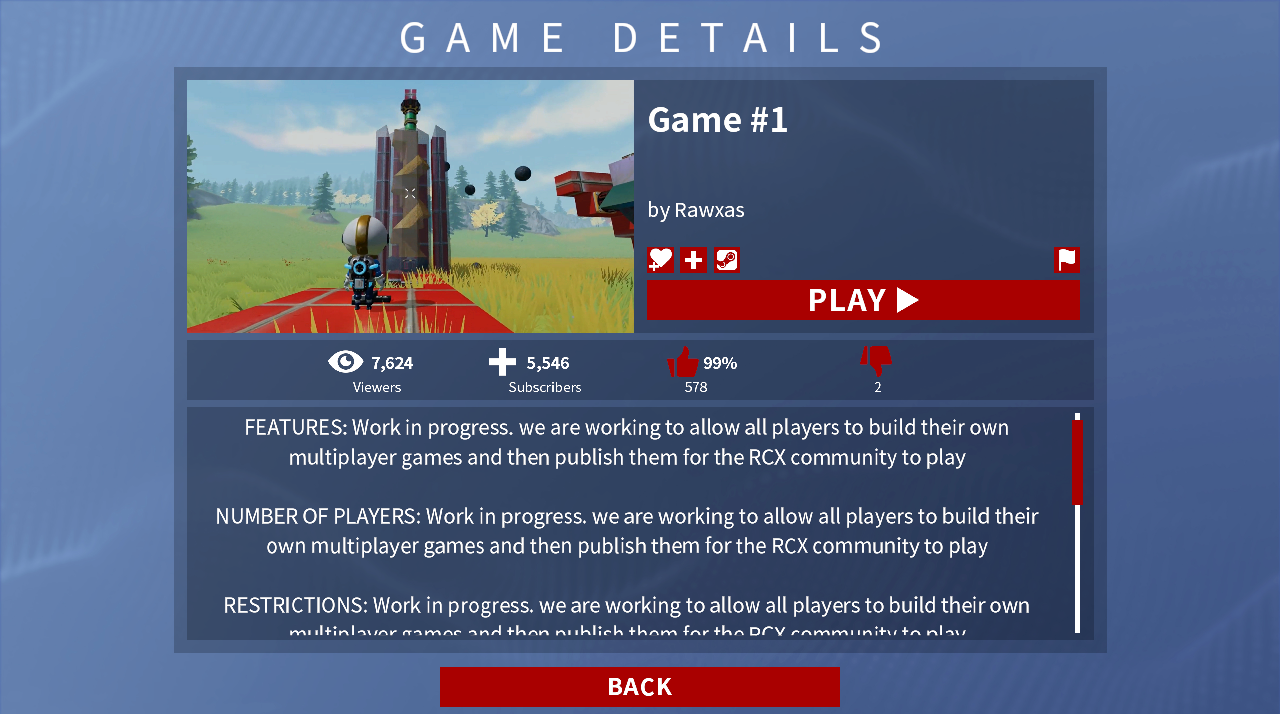 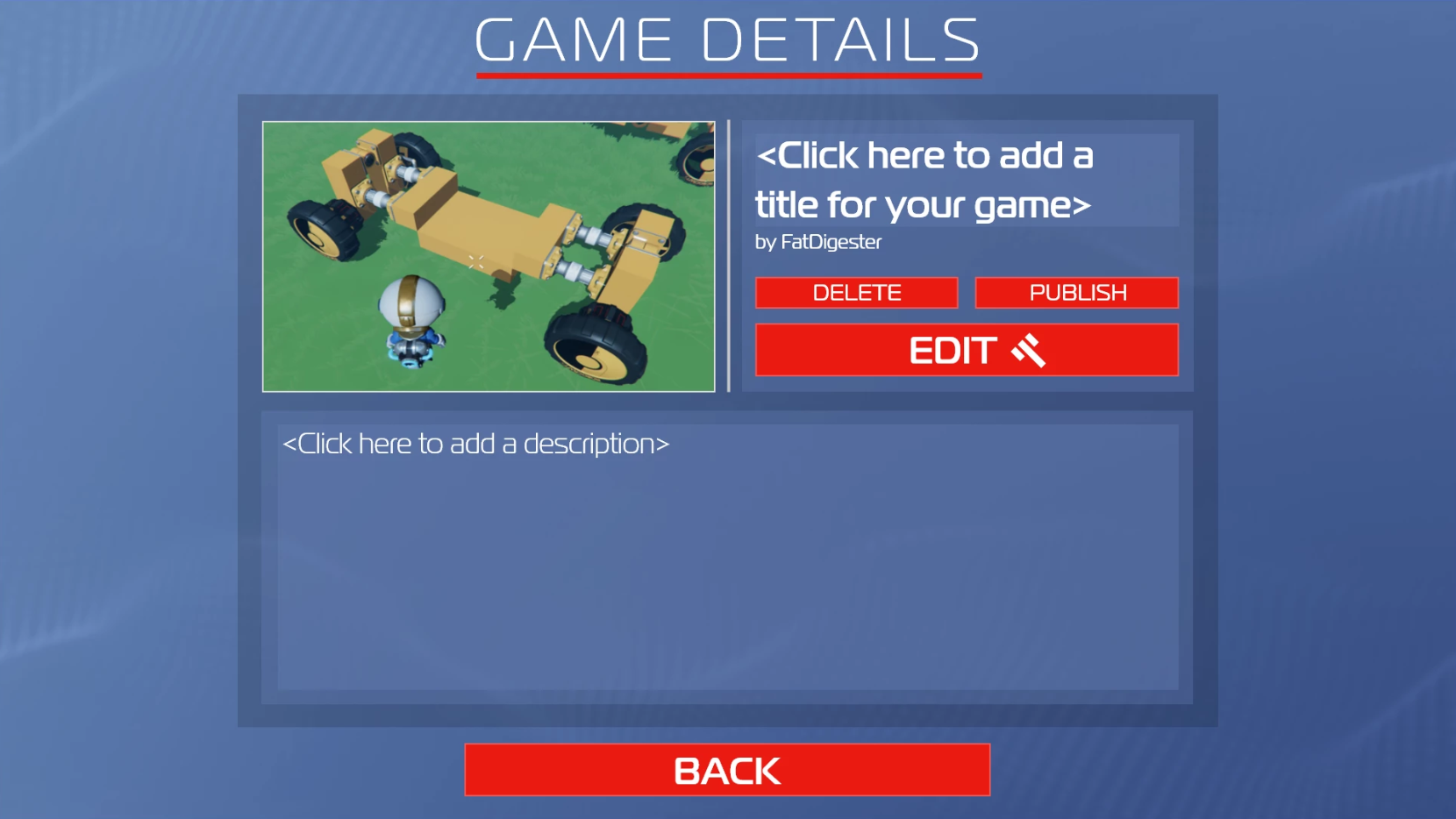 Once published it’ll be available for everyone in the community to play. From in game you can add a screenshot, title and description and if you want your games to really stand out you can use all the Steam Workshop functionality to add your own custom photoshopped click bait thumbnail, screenshots, youtube videos etc.

Users can give you votes on your content using Valves Workshop voting system but they can do it from in game. Players will be able to Sort content by ‘Newest’, ‘Most Popular’ and other common sorting methods like that.

Users can ‘Follow’ creators and can Subscribe to your game so they automatically get updates when you make them. They can Favourite games also to create a short list of favourites that can be revisited at any time.

Users can comment in Workshop on your games and you can respond to feedback you receive. 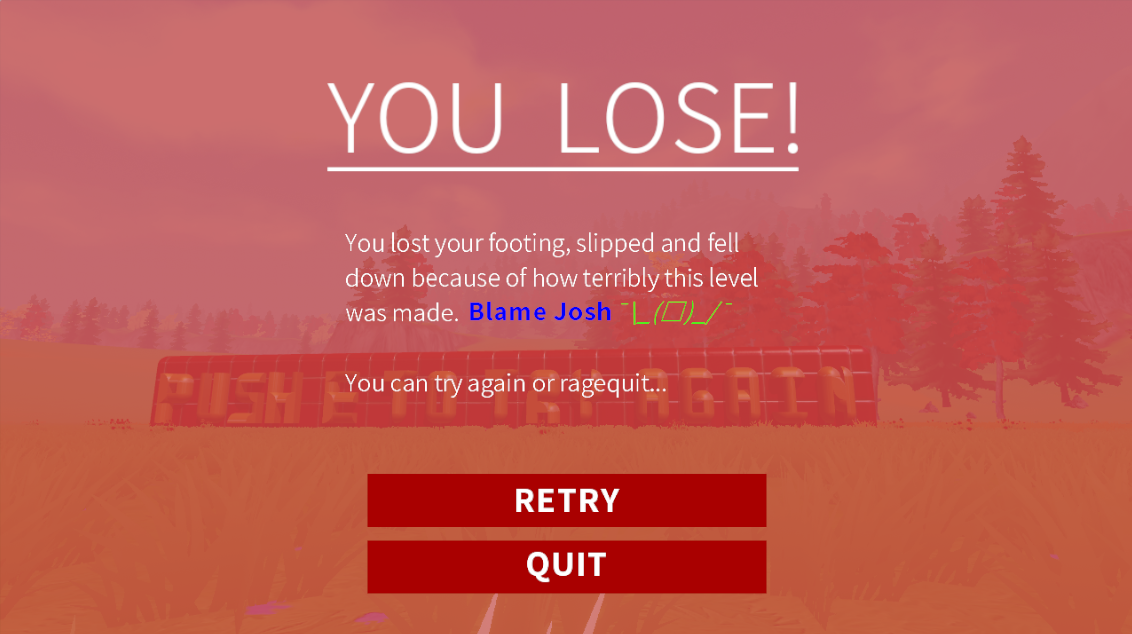 Game creators will be able to trigger custom end game screens. You can trigger them whenever you want; say when someone falls off the side of a platform or if a puzzle is solved incorrectly. You can also trigger the end game screen when the player succeeds and congratulate them with custom text content and styling. For the first time you’ll be able to make proper games which players can Win and Lose.

The End Game screen will have options to Retry and Quit. The EndGame console command will be triggered via the Script Block.

Of course in the future we’ll add Counter Blocks, Timer Blocks, Logic Blocks etc, so you’ll be able to do proper logic in your games.

We’ve been working hard on the core physics. This work will never really stop as we’ll always seek to improve this element. We’ve done some work to make joints more ‘rigid’ which we will release with Experiment 09. We’ve also done some work to improve collisions between objects. We’ve reworked the Servos and Pistons to prevent them glitching through things so much.

All of these changes have altered the behaviour of some of the existing games and we’ll be working hard at Freejam to fix them for you and re-introduce them, or if you decide to fix them yourselves and upgrade them with these new features above (such as Pilot Seat) we’ll focus on integrating your update as quickly as we can until the self publishing options are live.

We’re aiming to add more materials too and the ability to paint colours on all of them. Materials like Carbon Fibre, Wood, Ice, Brick, Tile, and others we have planned will come online.

We’re aiming to have this all done by Halloween, it’s a lot to do so we’ve got our work cut out but that gives you an idea of what’s in store very soon.

We’re also hoping to release around the same time a beta branch which will include the very earliest version of the multiplayer engine. You’ll need to use console commands to connect to friends and we expect you’ll find bugs and issues at this early stage but we’re keen to release a beta branch this time (something we never did in Robocraft Classic) so that we can let you play with new features and feedback on them early.

We’ve been feeling that the name RobocraftX isn’t really properly communicating what the game is. Whilst we hope to bring destruction, weapons and team multiplayer into the product, the aim is to add these as features you game creators can use to make awesome games for the RCX community. RobocraftX is way more than just a Robot building game, it’s a full Game Creator where you will be able to build full working multiplayer games with logic, narrative, characters etc. and all with blocks.

For this reason, on October 17th, along with the release of Experiment 10 we’ll be changing the name to Gamecraft. Here’s a work in progress new logo: 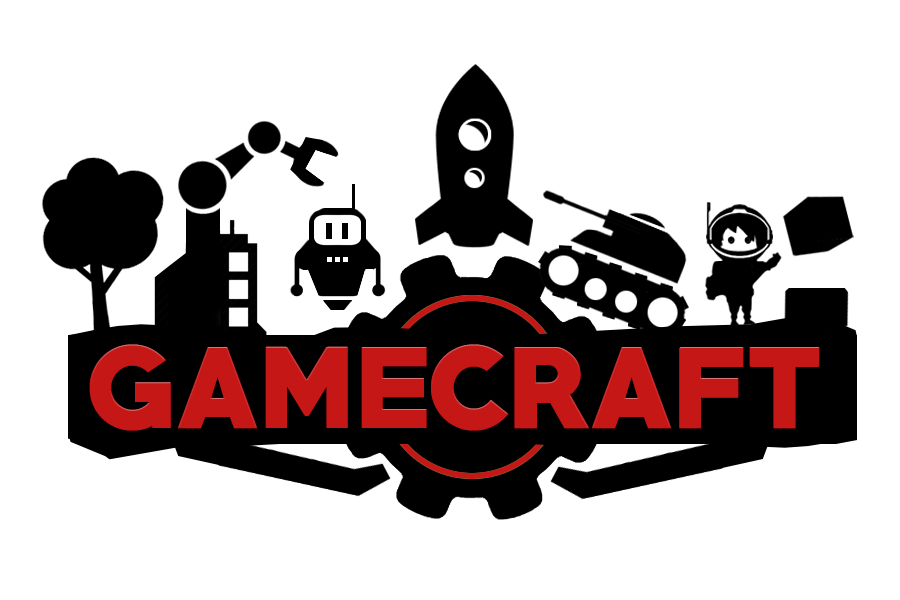 Finally we want to discuss price. We had originally thought the game would be free-to-play, but we have struggled to design the free-to-play business model to work well with grinding / buying blocks. We feel the product will work so much better if it’s a simple pay-up-front Premium model with a fair price point that starts very low and escalated as the product gets better.

Our plan is to shift the game over to $5 Premium (i.e. pay up front) on October 17th along with the brand name change.

This next bit is important:

ANYONE WHO ALREADY HAS A COPY OF THE GAME WILL KEEP THEIR COPY, FOR FREE, FOREVER.

ANYONE WHO HAS THE GAME IN THEIR STEAM LIBRARY BETWEEN NOW AND THE 17th WILL ALSO KEEP THEIR COPY, FOR FREE, FOREVER.

SO - TELL YOUR FRIENDS OR ANYONE YOU THINK MAY BE INTERESTED TO OWN THE GAME IN FUTURE, THAT RIGHT NOW IS THE LOWEST PRICE THE GAME WILL EVER BE (i.e. FREE!) AND TO GET IT NOW.

We’ll be posting repeated posts in the coming weeks about the name and price change so nobody misses the opportunity to get the game for free whilst it is free.

NB: Along with this change we’ll remove the limits on block counts in the Inventory.

I need help on downloading it I'm clicking on the link and it won't work can someone help me?

Really excited about this game :D