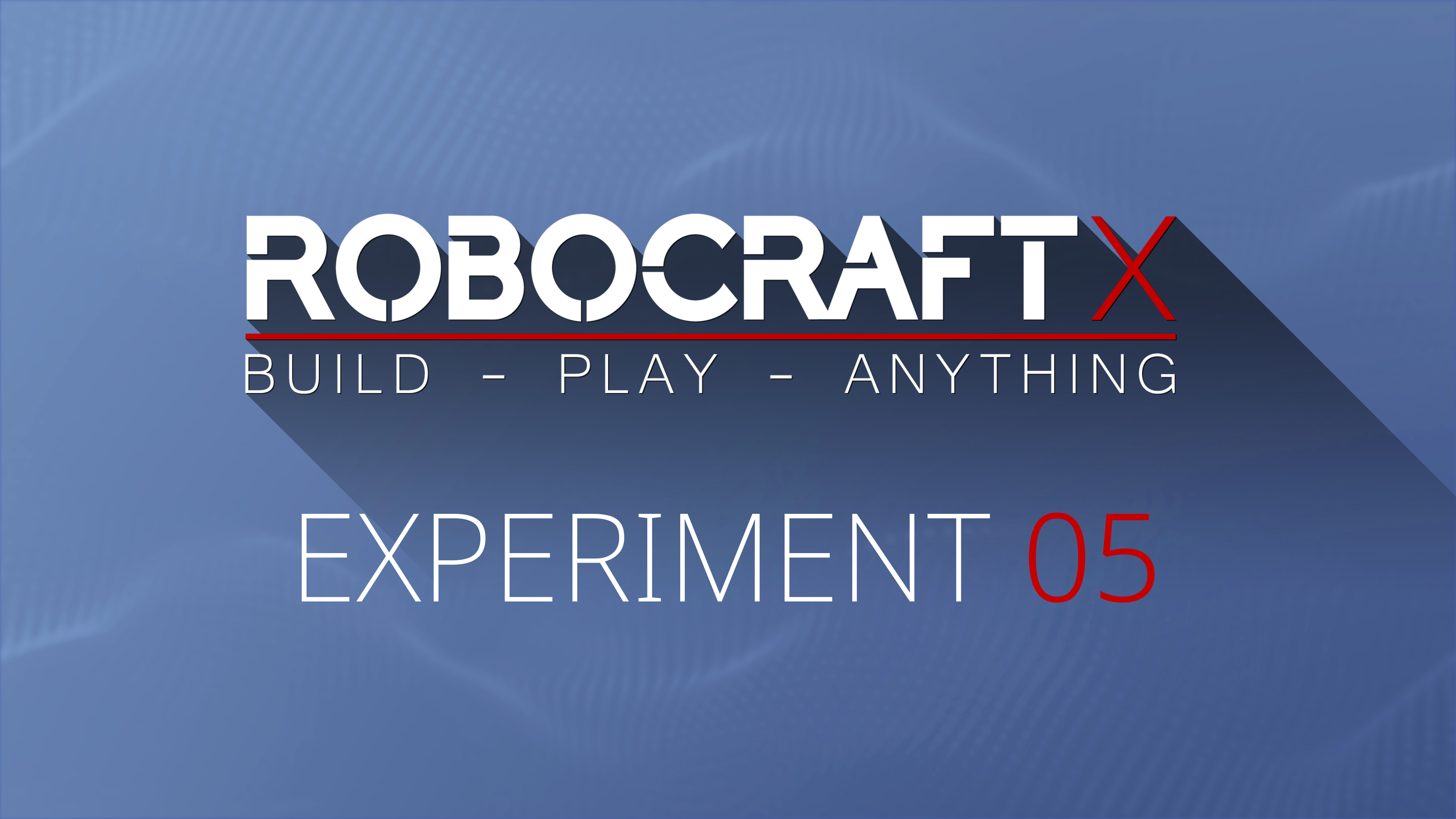 Experiment 05 is here, and while it may not be as massive as 04 at first glance, we've still got a lot to shout about! Read the full list of changes below:

We have 4 extremely powerful new parts for you to play with! The Servo Hinge, Servo Axle, Stepper Motor Hinge and Stepper Motor Axle are here.

These parts are all motorised variants of their joint counterpart and as such, require a power source, can be assigned signal channels and can be controlled by Levers. We'll go into the details below with some practical examples.

These start in a ‘neutral' position, much like their counterparts, and will rotate to a target angle/rotation. In the case of Hinges, this will be 90 degrees in either direction. With Motors, this will be 180 degrees clockwise/anti-clockwise.

If these parts are powered, but not assigned to a Lever, they will start to move to their “+1” target as soon as you exit stasis. This means that the Hinge will start rotating 90 degrees in one direction, and the Motor will start rotating 180 degrees. These parts will only consume power while they are actively moving. As soon as they reach the target, they stop consuming power but remain fixed in place! These can be great for things such as doors, where you only want a fixed level of movement.

If there is a Lever present then you will be able to control the angle/rotation with perfect precision. As the Levers and Servos both start in ‘neutral', moving the Lever to any position will cause the Servo to match that position. Setting a Lever to +0.5 for example, would cause a Hinge to move 45 degrees in that direction before stopping. Moving the Lever back to neutral will move the Hinge back to 0 degrees.

Steppers work a little differently to Servos but the basic concept is the same. They still consume power while in motion, but with one big distinction. Instead of moving to a target angle/rotation, these parts will ‘step' towards their end rotation while active.

Levers will instead control the speed of these steps. This means that setting a Lever to +1 will cause a Motor to rotate 180 degrees as fast as it can, where it will then stop and stay. Setting it to +0.5 will cause it to take twice as long to rotate 180 degrees. Setting the Lever to neutral will simply stop the Stepper in its current position! This is great for timers, like setting up a handle to knock over the first domino in the sequence or lock a door by moving something in front of it!

We have a couple of new joints for you as well. The Ball Socket and Universal Joint offer even more freedom when connecting two objects together.

The Ball Joint offers full 3-axis rotation between the connected parts while the Universal Joint slightly restricts this to 2-axis.

We've added loads more of the games shared on our Discord to the “Community Games” menu. Thanks again to everyone who's been working hard on creating these amazing games and we look forward to what you all make next! Along with a new “Tutorial03” and “Tutorial04”, the new games are:

We've made some small changes to the messaging in the Main Menu. “Play Games” and “Build Games” have now been renamed to “Community Games” and “Creative Mode”. These buttons have also been swapped around so that creative mode is the front runner.

The music for stasis/simulation has had a bit of an overhaul as well. The background music in Stasis is now a slower, more distorted version of our beloved soundtrack to drive home the “stasis time” concept. Switching to simulation causes this track to speed right back up to the version you're all used to. The switch itself should be smoother and more distinct now as well.

We've added in a small “saving” indicator in the bottom right of the screen while playing to let you know it's been 20 seconds and the schedules autosave has been triggered. You'll still save on exit as well, there just won't be time to show this icon.

New players will have a slightly more populated default game save now! Anyone that doesn't already have a save file in “C:\Users\[USER]\AppData\LocalLow\Freejam\RobocraftX\Games” will be given a new “default” save with some examples to play around with.

We've made some more optimisations to the save feature itself, which should help us futureproof and avoid any incompatible files as we continue to make changes. This shouldn't have any noticeable impact but please do let us know if your old save files suddenly stop working.

We've also done some optimisation on the Community Games screen to load your pool of games a little faster. Instead of loading the entire directory in one swoop you'll now see games pop up one at a time.

We have one known issue with the Servos that we wanted to give you a heads up on. If a Servo moves its connected blocks into another cluster of blocks, there's a high likelihood that these will simply clip into each other rather than causing the Servo to snap. This can also lead to strange ‘self propelled' builds in other cases when Servos try to push the same object in opposite directions.

We don't believe this is critical enough to delay this build at this stage but we're working hard on a fix that we'll deliver as soon as we can.

We can't wait to see all of the new games you create. We'll keep including as many as we can so be sure to share them over on our official Discord! Experiment 06 is just around the corner, so keep your eyes peeled.