Road to your City

Road to your city is a football-city build-up simulation where you slip into the role of a city mayor. You will be responsible for creating perfect conditions that your little town can grow to a big football city. This is not another manager game where you need to set up team formations or do some coaching, it´s more a simulation around your football team.

Thanks for voting and helping Road to your City on it's quest to become the 2022 Indie of the Year. You are now in with a chance to score some free games. Help this game secure more votes by embedding the widget (or link) we have included below on your favorite sites.

Road to your City released on Steam!

after 5 years of development I'm very proud to announce that I've released my first game Road to your City on Steam last Friday! It was a long journey but it was a lot of fun. The game is currently in Early Access.

In February I started a Kickstarter campaign to raise a little bit of money to improve the game with more up-to-date graphics, better sounds, more music and so on. Originally end of May was planned for the Early Access but after failing with the Kickstarter I had the feeling "Now more than ever!". So I started crunching and was able to release it last Friday.

The start was quite ok. Right now the game is trending on Steam and also has a very good visibility in the sections "Early Access", "Simulation" and "Sport". 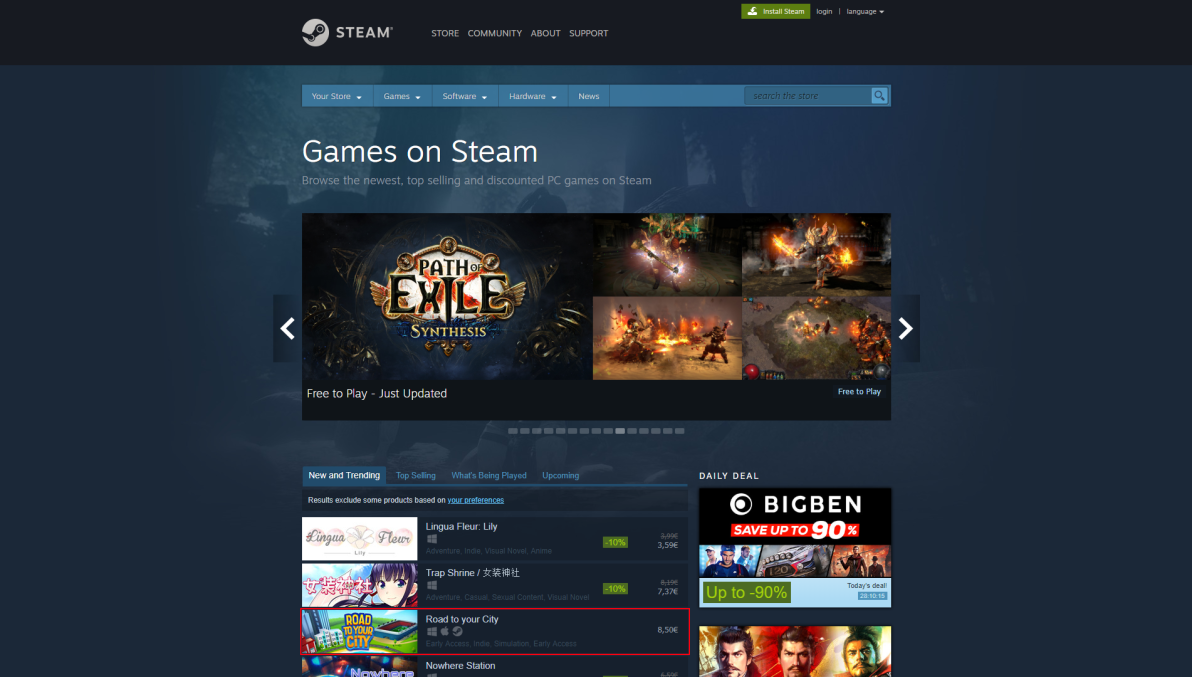 It has also been played by YouTubers and Streamers. There is a Let's Play from The Geek Cupboard:

Yesterday I was invited from a German Influencer Writing Bull in his Sunday evening stream. It has been streamed on my Twitch channel and a first video is available on his YouTube channel as well (video is in German):

If you haven't heard about the game so far and you'd like to try it out before consider buying it, there is a demo on Itch.io which you can test. The playtime is limited to 20 minutes but this should be enough time to get a first impression.

If you liked the demo or already felt in love with the concept, game or my store, you can get it now on Steam for a very fair price.

Since I created the game in my free-time and I've a job I'm able to keep the price pretty low to make the game available for even younger people. The prices are:

The game is currently available in four different languages (more to come):

Devlog video #9 for Road to your City has been released. This episode is about development progress only. The last week has been really productive with...

Now on Kickstarter - Road to your City

Today the Kickstarter campaign of Road to your City has started. There are a lot of interesting perks which makes it easy to support the project. In addition...

Devlog video #8 for Road to your City has been released. This episode is about the upcoming Kickstarter campaign on February 1st, 2019 and the released...

Indie
Tags
Embed Buttons
Link to Road to your City by selecting a button and using the embed code provided more...