RIZN takes place in a post-apocalyptic world where the R1Z-N virus has turned the entire population into the walking dead. You'll take control of a character recently bitten and infected with this plague and must shoot your way through large hordes of the undead in an effort to survive.

Along the way, you'll need to craft injections to stave off infection long enough to locate and use research stations to find a cure. With a heavy focus on cartoon gore and a thin veil of comic relief, RIZN relies heavily on the physics engine to create crazy and exaggerated results for headshots, explosions, and more.

I'm excited to be back working on my zombie shooter after having taken a short break to focus on updating some projects for my freelance portfolio. One of the few remaining large features left to implement is zombie attacks, so I decided to start there given that I'd already done a fair amount of testing ideas in this area in the past. The video below shows the progress that I made earlier this year:

This work was done back in February but, given that zombie attacks weren't a priority at the time, I set it aside once I had the concept tested enough to be confident it'd work the way I hoped. This week I began making this concept work with gameplay. 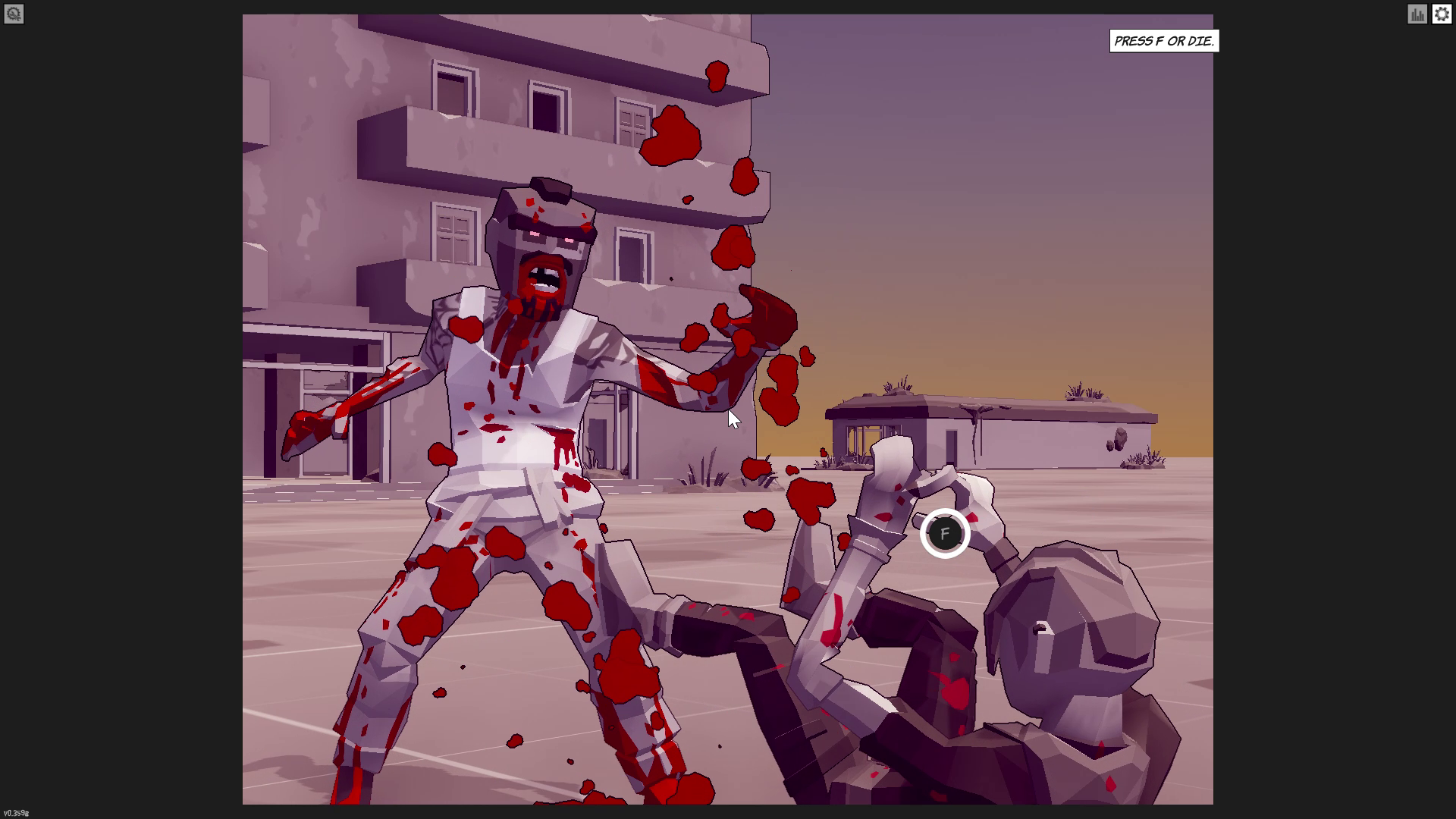 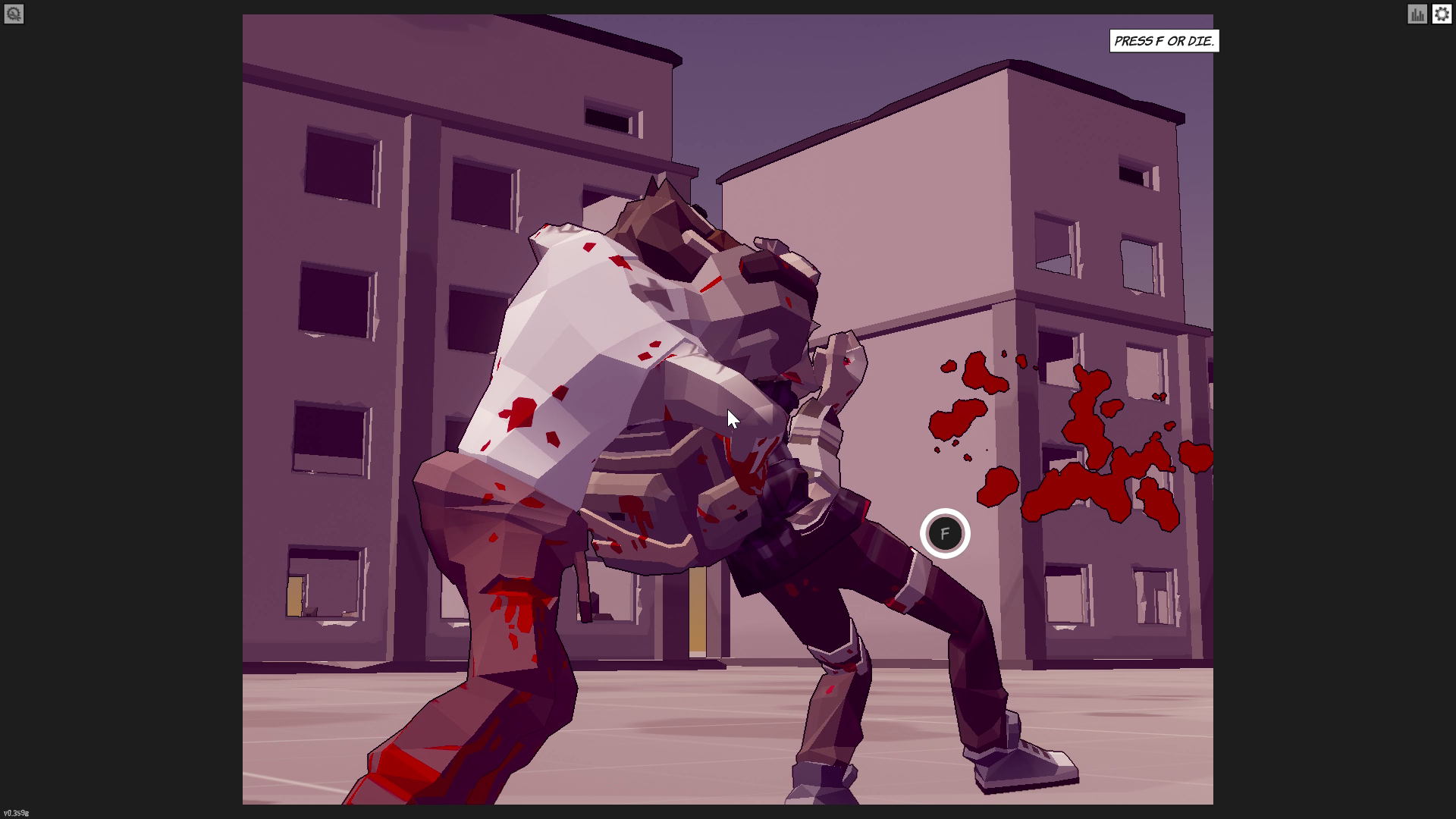 There's a grapple attacks for both from the front and from behind, and the correct animation set is chosen based on the zombie's position relative to the player. I've created a secondary camera for the attack sequence as well, which has its own custom canvas used as a prompt that instructs the player to hammer the F key to save their backside. I'm also leveraging the in-game desaturation shader to fade out the colors (except blood) in sync with the animation's progress for effect.

This all comes together as depicted in the video above, and while I feel there's quite a bit of room to add some polish and additional graphic novel elements, I'm pretty happy with how this turned out; especially considering this is the most complex of all the zombie attacks. I'll be spending time this week getting more generic attacks working as well and hope to have a more complete video to show by this weekend.

A Full Day in the Apocalypse

After finishing several new updates, I was able to record nearly 30 minutes of unedited gameplay in RIZN. With this major milestone reached, I'm looking...

This article covers the process of building a custom real-time occlusion culling system for the zombies in RIZN.

This week I've added a brand-new zombie type that self-detonates as well as overhauled the game's main menu so it's a closer match to other canvases.

With level generation now working alongside all other game mechanics, I'm one big step closer to having a full gameplay loop in my zombie shooter.

Love love love the look of this game! Great animation! And who doesnt love a good zombie game?? I'm wondering if you have any audio implementation up to this point?

About rebuilding the zombie spawning system. We all have been there, further into the project we start to find things that could have been done much better and would benefit the game so much more. But, it means that it will put the release date back for weeks or even months. Although I only have mod experience and not game dev experience I do know that it is best to make the changes, even when it means extra time. Except when it means throwing the game out of the window and starting all over again. Because when you don't you probably always will ask yourself what if you had made the changes. And as you said yourself "it allows you to implement a few new ideas that weren't scoped for at the time". So it is an improvement upon improvement. It takes some daring to make such changes, but isn't game development all about that, lol?

So I would go for it, although I fully understand your wish to want to show your game earlier than later. It is hard to sit on your jewel and not be able to show it.

Success, whatever you decide, your game is awesome anyway!

Thanks so much for sharing your feedback and insights. In rereading my article, I can see that I may have failed to convey that the spawning system will be rebuilt regardless, it's just a matter of whether that happens before the demo or after; not sure if that was clear or not. Releasing the demo is going to give me a ton of information that I couldn't get otherwise and there's a chance that said information could change things quite a bit. Or a player could have a great suggestion that I didn't scope for at the time of the rebuild. I'm also anxious to get the demo out there and to start getting feedback from players who've spent time in the game; the information they can't give based on videos will be priceless, especially since I'm working solo and am the only one who's played it. There's enough working with the existing spawner for a demo, but it's all still up in the air for now.

I am looking with great interest to your demo and for sure will, I play it first as a normal player and then test it extensively. The game being tested by players who play it for the first time will give indeed a ton of information and maybe indeed even great or funny ideas.

I have a short list of people who will be offered the demo before it releases to the public and you've been on it for a while now :) It'll help me knock out any big unforeseen issues (for those willing to file bug reports) and I have no issue with anyone streaming this game or sharing gameplay videos.

Sorry for my late comment, thought i already had answered here again, which I clearly did not. Would love to test your demo, and a fresh pair of eyes can always see things that the dev himself overlooks, simply because he has been looking at it for so long. Just let me know when you're ready for testing.

WOW! This is clearly something else. Looks like you
did put everything in this game that I love. So, I
completely share your idea for this game, and of course,
will I follow your progress from now on.
Can't imagine that this game will not be successful
on release.

Thank you so much for your kind words! I sincerely appreciate you taking the time to share your thoughts and will be doing everything I can to ensure I don't disappoint.

Among Them Third Person Shooter