Rift Wizard is a tough as nails retro fantasy roguelike, with an emphasis on strategy and build planning.

You play as an immortal amnesiac wizard, who must relearn magic as he crosses a myriad of dangerous realms to slay his nemesis.

Will you become a powerful fire wizard, roasting hordes of foes with fireballs and pillars of flame, summoning fire dragons and elementals for backup, dabbling in chaos magic to deal with the odd fire resistant foe?

Or will you write your spellbook into a complex engine of death magic, harvesting souls from fallen enemies to fuel death wheels and nightmares, protecting yourself with the reanimated corpses of your foes, eventually even backing up your undead hordes with healing magic?

Perhaps a hybrid approach would be wise- the denizens of the wastes are quite varied, and what is devastating and overpowering in one realm might be laughably useless in another. There is an art to authoring the perfect spellbook, focused enough to achieve great power, but diverse enough to never be irrelevant- an art you must perfect if you are ever to succeed.

Whatever you do, manage your magical resources carefully! The empires and civilizations of man fell long ago, now there is only chaos in the universe. There is nowhere to rest or shop- you must survive only on what you find in the desolate ruins of the universe, and what you can conjure forth from your mind. Should you fall, you will forget everything you know, lose all the magic you have learned, and be forced to start again a thousand years later from nothing.

The gaming industry loves buzzwords. From metroidvania to roguelike – these all went from being useful terms by which players could identify their favorite quirks of a genre, to simple marketing slogans. Yet, there are games that deserve their advertising, recreating some exact kind of nostalgic experience in a way that goes beyond just game mechanics. Rift Wizard is one of these. It seeks to entice the traditional roguelike community, not just with gameplay, but with aesthetics, too. 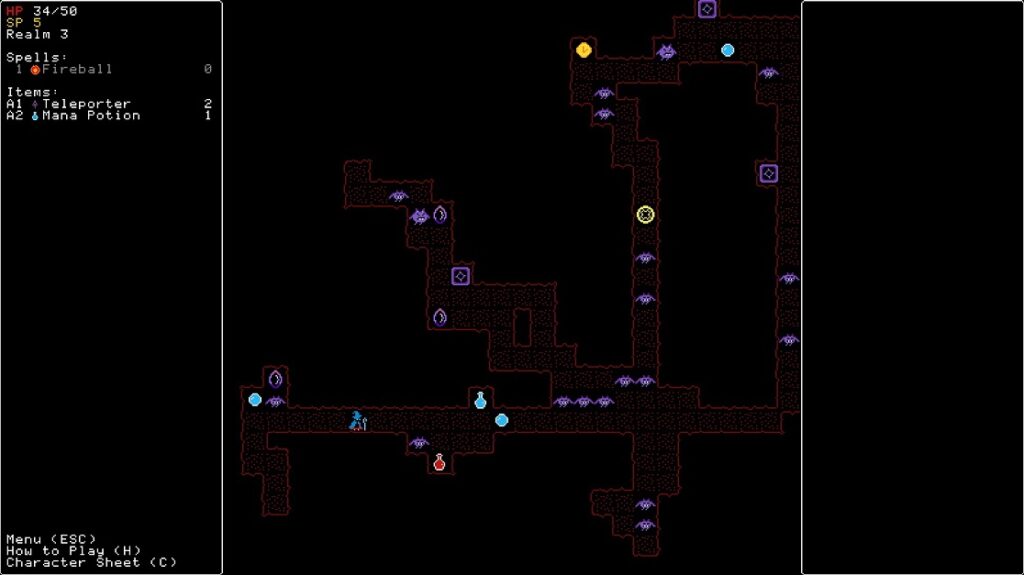 Rift Wizard distills the roguelike experience to such a degree that it could pass for one of the 80s classics. There isn’t much plot here. The player will inhabit the cape of a wizard, who’s forgotten all his spells and has to rebuild his repertoire from scratch, slaying monsters along the way. Complete the 24 levels, kill the final enemy, Mordred, and you win.

The game, developed by Dylan White, present the player with a series of procedurally generated challenges. Each differs from the last, with odds sometimes (well, quite often, actually) not in the wizard’s favor. But, I guess that’s life, isn’t it? The goal is always the same, though: defeat the opposition and leave through one of the rift doors.

GATHER UP YOUR SPELLS

At the start of each match, the wizard gets a few spell points, or SP. These are used to learn the first incantation, usually an offensive one, like a fireball or an icicle. Each spell belongs to a different school, be that of Fire, Water, or Metal. Those, of the conjuration variety, are used to summon creatures that’ll fight in your stead. Each spell, regardless of its type, has unique advantages and disadvantages. All of them have a limited number of uses, however. When these are depleted, the player’s left with two choices. Either visit a portal, which don’t exist on some levels, or use a magic-restoring potion, that complements the standard healing one.

The game offers multiple skills, used to specialize in a particular kind of spells. These, however, take more time to learn, requiring levels, gained by killing numerous enemies. Potions aren’t the only type of items in Rift Wizard, either. There are also teleporters: tickets to escape a tight situation, or quickly traverse some level.

The main feature of the game, however, is its massive library of spells. Such impressive variety allows a great degree of freedom in building, or rather rebuilding, the wizard’s magical powers to their full might. In some runs, the player may create a tank-like character with ultra-strong lightning spells. In others, one who’s better at defense and will just hang back, letting his minions do the dirty work. It could be interesting to see a bit more customization, like sacrificing health for stronger spells, for example. Yet, as far as its simple mechanics go, Rift Wizard covers all its bases, with great attention to detail......

Dust to The End Review

Dust To The End, puts economics front and center. Starting with little more than a weapon and a handful of questionably-acquired cash, players wheel and...