Radial 50 - for the iPhone and iPod Touch - is a new take on the classic “Breakout” game first introduced on the Atari in 1976. Radial brings an entirely new aspect to the arcade classic by allowing the player to control the paddle and ball around a 360 degree playfield and focusing the gameplay on defeating a central target, rather than the often painful chore of eliminating all targets on the gameboard.

Radial 50 - for the iPhone and iPod Touch - is a new take on the classic “Breakout” game first introduced on the Atari in 1976. Radial brings an entirely new aspect to the arcade classic by allowing the player to control the paddle and ball around a 360 degree playfield and focusing the gameplay on defeating a central target, rather than the often painful chore of eliminating all targets on the gameboard.

Radial 50 works on all Apple iPod Touch and iPhone versions.

The primary objective of Radial 50 is to survive 50 rounds of increasingly difficult gameplay and over those rounds achieve the highest score possible. To pass each round, you will use the iPhone’s touch screen to control the paddle to project the ball towards the targets. Striking the targets will eventually unlock the center defense, allowing you to strike the inner most diamond and advance to the next round. If you miss the ball, allowing it to strike the outer playfield wall, you will lose paddle health. Letting the ball strike the wall too many times will eliminate all health. Health will regenerate over time, but once you lose all health the game is over.

Controlling the paddle in Radial 50 is as simple as sliding your finger up and down. As you slide your finger the background will spin as well. Think of it as spinning a record, where the paddle is in a fixed position on the record. 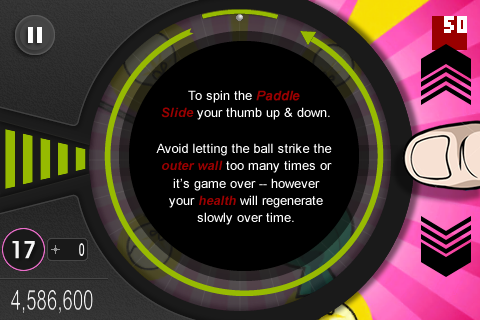 As you play each round, you will begin to familiarize yourself with the interface of Radial 50. Below are details on each interface element. 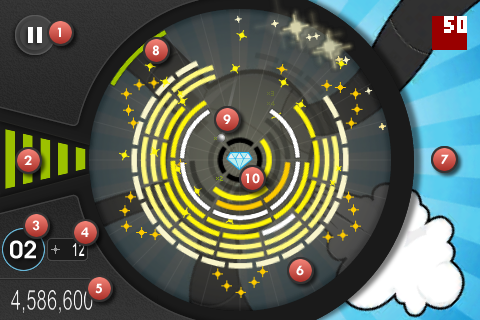 1. Menu/Pause Button Hitting this button at any time will pause the game, and provide with you with the in-game menu.
2. Health Meter The health meter shows the number of hits remaining before all life is lost and the game is over. The health meter regenerates slowly over time and will always be full at the start of each level.
3. Current Round The current round number, of 50 total.
4. Total Paticles Collected The number of particles you have collected in this round.
5. Overall Score Your overall score for the current game.
6. Playfield The playfield, which consists of the paddle, ball, targets, and the center diamond.
7. Paddle Control Area The area used to control the paddle. Slide your finger up and down to make the paddle spin around the playfield.
8. Paddle The paddle is controlled by the player and is used to project the ball towards the targets. 9. Ball The ball is used to destroy the targets and evenutally strike the center diamond.
10. Center Diamond Strike the center diamond to proceed to the next round. Sometimes the center diamond is protected and the player must eliminate enough targets to unlock it.

The difficulty of each level will increase as you progress through each of the 50 rounds. The following attributes contribute to the increase in difficulty.

Scoring Scoring is the goal in Radial 50, and there are plenty of ways to do it. Major scoring areas include striking targets and target multipliers, collecting target particles, completing each round and doing so quickly, and special bonus point events. The amount of points earned for each scoring element increases with each new round completed.

Below are additional details on Scoring…

Players earn points for each particle collected, and the point value for each particle increases with each round. Players will also earn bonus points (see details on Bonus Events) for collecting 50, 75, or 100 particles in any single round.

The number of particles ejected from each target is relative to the target’s multiplier value.

Each target struck earns the player points, and this point value increases with each round. For each successive strike of a same colored target, the player will earn a point multiplier, up to 5x the initial value of the target. The multiplier does not apply to Defensive (black) targets, on rounds in which the center diamond is locked.

During and at the end of each round, the player has a number of opportunities to earn additional points through bonus events.

At the end of each round, the player will see a summary of points earned, and will also earn additional points based on how quickly they finished the round. The final value is based on the time bonus value for that round multiplied by the number of seconds under 180 that the round was completed in.

Causes the ball to travel “through” standard (non-defensive) targets

The entire ring where the powerup existed is eliminated

Targets within the area where the powerup existed to be eliminated

The entire playfield turns dark for a short period, in effect causing the player to lose sight of the ball

The entire ring where the powerdown existed is refilled with targets

The ball will act unpredictably for a short period of time 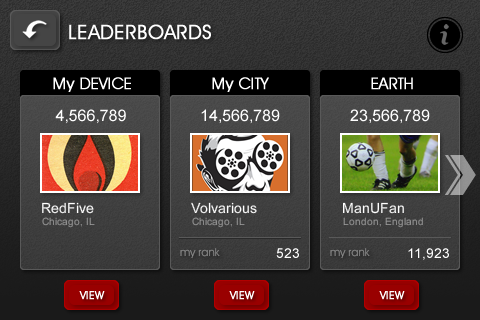 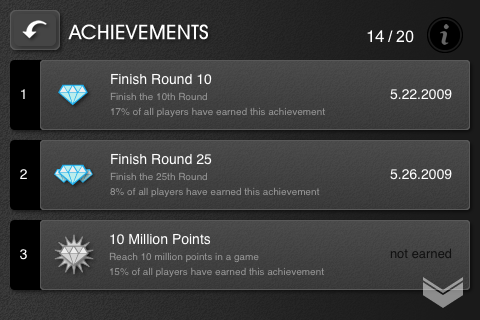 100 Keys To Your Heart Puzzle