Skydome is a team based action-tower defense game in development for PCs! It features 4 versus 4 online multiplayer matches, with tribes competing in a flying dual-arena complex.

Welcome all to the kickoff of our IndieDB profile and to celebrate we have a short overview of Skydome to share so you can see it in action!

The idea of Skydome was born from Warcraft 3’s mod Hero Line Wars. You can call it whatever you like, be it 'reverse tower defense', 'hero defense' or just 'income'-kind of game. Anyhow, we are big fans of this genre and think there’s so much we can do to expand it in such different and cool ways. That’s exactly what we are aiming to do with Skydome. 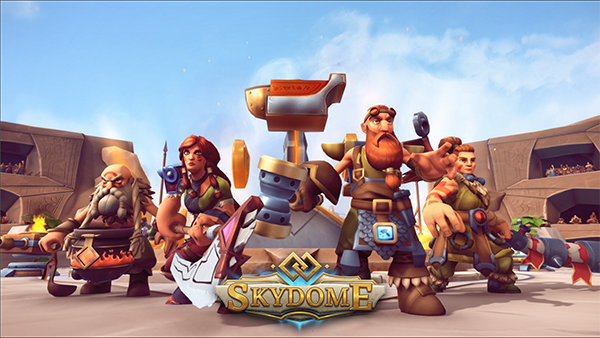 Skydome features 4 versus 4 online multiplayer matches, with tribes competing in a flying dual-arena complex. Each team is kept on its own separated, identical arena. They compete by sending large amounts of troops to attack each other. It’s a strategic survival game, you can choose the kind of troop and the path it will follow. The team that can keep the waves of troops from destroying their artifact wins!

How do you defend against wave after wave of enemy sent troops? You wipe them out with your tribe champion! Each with its own style and gameplay, featuring a number of action and tower defense skills. Have total control of your champion with classic WASD movement and cursor-based aiming!

Just because you’re on different arenas, it doesn’t mean you won’t see or damage the enemy players yourself! Champions’ have special long range skills called interventions, which go over the barrier between the arenas and disrupt the enemy defense directly!

We think that’s a good intro on Skydome and a good first IndieDB article. We are a small team with big ambitions, we're aiming for Skydome to release in the beginning of 2019 and we have much more to share in the future! We are planning updates every Friday and you can also find us on Facebook, Twitter and elsewhere at /PlaySkydome. We want you to help us in this journey, to get your feedback. Thanks for reading and see you next week!

Be welcome everyone! Today we will share a little bit of Groma’s implementation! This is the step where we grab everything we discussed earlier and...

Hey everyone, what’s up? Today we will stick to the reigning kingdom of audio, we leave the land of sound effects and walk into vocalization! Where...

Welcome! Today’s topic will be about sound effects, also known as SFX! One of the few parts of Skydome’s development that is not totally done in-house...

Continuing with our series about the creation of Groma — today’s post is about Visual Effects. The production of visual effects (also known as VFX...

PlaySkydome thank you very much. We put a lot of effort to the project and hope that people will enjoy visual site of the game. Anyway congrats on your work so far!

It's been a really a different experience for us, doing an 'open' art like that one. Let's see how it will end, TapItGames.

On a side note, we can barely imagine how many arts and concepts you gotta do for a game such as Perseverance. Congrats on that.

Concept arts are amazing! Really like the example of thumbs and final, "movable" concept art of Groma.