This blogpost, I describe why and how I'm going to implement something similar to a leveling system.

The quest for addictiveness
Hi all, if you've been following this blog for some time, you know that one of the biggest challenges for the game so far has been that it is not really addictive. I don't have exact data on this, but I get the impression most players play 2 - 3 times, and then forget about it. The outcome of my recent email survey was that the reason for this is that players don't really know what to do after they have accomplished the first basic things. Last update, I tried to fix this by adding an in-game guide for crafting recipies (the Big Book About Crafting), and a quick start guide with the controls for new players.

What worked for me?
This update, however, I'm trying to approach the system from another angle. I asked myself: which games have I played for a longer periods of time, and why? This turned out to be games like RuneScape, World of Warcraft, League of Legends, etc. What do all these games have in common? Yes, a leveling system! Now that I think of it, if I have to choose which game to play, a game with a leveling system is always been more attractive to me somehow, simply because a leveling system gives me the feeling I'm using my time more efficiently: I'm not only playing a game which is fun, I'm also working towards something visible (a higher level). When the playing session is over, I can not only look back at a fun hour or two, but I can also look at all the extra experience points I gained, visualized before my eyes.

So should I build a leveling system into Olvand? If you would have asked me this a year ago, I would have shouted at you, angrily: NO! This is because, although I realize that they work, I also hate leveling systems: they make players do in-game actions because the players want the result (XP), not because they want to do the action itself. I mean, why would you want to kill the same rat five times over? For me, leveling systems have been tied to endless grinding, making players do things they don't really enjoy, which make a game feel much more like work than like entertainment (although, I should add, I really enjoy my work, but you get the point ;) ).

Another take on leveling
Recently, however, this opinion has begun to change, mainly because I didn't really hate the leveling system in League of Legends. Instead of for rewarding you for doing something boring like killing five rats, League of Legends rewards you for simply playing the full game. Doing it this way, we have the best of both worlds: players are encouraged to play the game more, but within the game can do anything they want.

And what's even better, in Olvand we already have a system that encourages players to explore as many parts of the game as possible: achievements! What if I turn that into some kind of leveling system? In the next update, I'm going to start trying to achieve this, by making players much more aware of how many achievements they have: 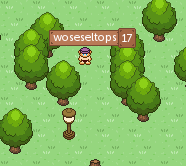 And that last picture probably is the most important one for my new strategy: the number of achievements you completed will be displayed next to your name, for everyone to see. This is because I believe leveling systems work so well in many games not only because the visible progress and goals are satisfying, but also because you know OTHERS can see your progress. With your numbers of completed achievements easily visible for everyone, I hope players will not only be motived to get more achievements because they simply want them for themselves, but also because they want to impress others: imagine you have 8 achievements, but your friend has 9...

To take this idea of tempting players to impress others even further, I've also included this functionality: 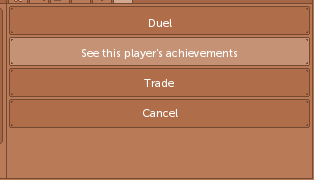 It appears when you interact with another player, and takes you to an online public profile. Here you can actually see which achievements exactly your friend completed, and compare them with yours.

Too long; didn't read
So, to sum up: in various places in the game, I'm going to display how many of the achievements players completed, hoping that this will encourage players to get more achievements and thus explore more parts of the game. On top of this, I will show the number of completed achievements of a player to other players, hoping that this will encourage players to impress eachother. Will this actually work (or will players hate it)? We'll never fully know, but I'll try to analyze the data, and will report the results back here. To be continued...

I love the art, where did you find it?

Haha, in my imagination ;). I do all coding, pixel art and music myself.