Oliver and Spike is an adventure, platform game and exploration puzzler mix which combines elements of traditional 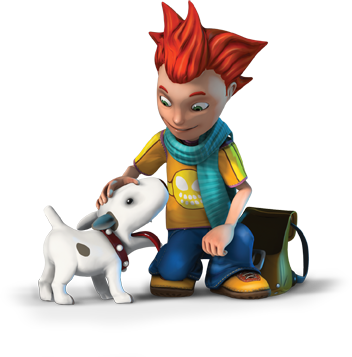 We follow Oliver and his trusty friend Spike, a small British Bull Terrier, on their quest to uncover the past and save the future. Sounds very generic? Well it's not! Unlike a traditional exploration and adventure game, Oliver&Spike features unique Dimension Jumping game-play. The Game will be available for Consoles, PC and Mac with additional companion games for iOS, Android and web depending on funding.

Each world (called Clusters) consists of at least three alternate Dimensions which need to be switched to in order to get ahead in the main quest-line. These Dimensions have the same basic shape but are otherwise very different. The Firma Dimension, for example, enables Oliver to bounce and jump higher, while the Aqual Dimension is submerged in water. With Oliver's special ability, he can switch to available Dimensions at any given time if a few pre-requisites are met.
These Dimensions however don't just serve as a fast go to point to get along on the main world. The alternate Dimensions have their own look and feel and characters with side quests, collectibles and secrets to uncover and explore. While you can fast switch to the Aqual Dimension to swim up to an otherwise inaccessible ledge, you will on top of this encounter its quirky and fun inhabitants. Read more about Dimension Jumping HERE.

There will be areas were Oliver and Spike can be controlled by different players and areas might only be accessible thanks to team-play. In an older development video on our development blog you can see how Spike is distracting a vicious plant in order for Oliver to climb past and push the log down which in turn enables Spike to progress to the other side.

While the focus of the game is to make sure it can be played alone, we are trying to implement as much game-play as possible which is playable in co-op mode with friends or family members. We won't block you from progressing through the game though, co-op will not be a necessity and fully optional.

We want to share the Oliver & Spike story on multiple platforms. For us, that doesn't mean just porting the core game from Console to PC or Mac but instead use the advantages of each platform to give you a fun and exciting overall experience. This means companion games on smartphones, or social games on Facebook. These mini games will further immerse you into the world of Oliver& Spike, explain about characters and give your more insight on the actual story-line.
We do have that knowledge in house and a very experienced team. It would be a waste on our part to not use this potential when it comes to different platforms. It also presents a unique opportunity for further immersive storytelling. We are also researching if a link between console builds and social media is possible.

Comic panels are also part of explaining what happened before the player starts the game. Our goal is to also create a line of comics and ideally even animated movie series to tell the story about all these beautifully designed worlds we designed. 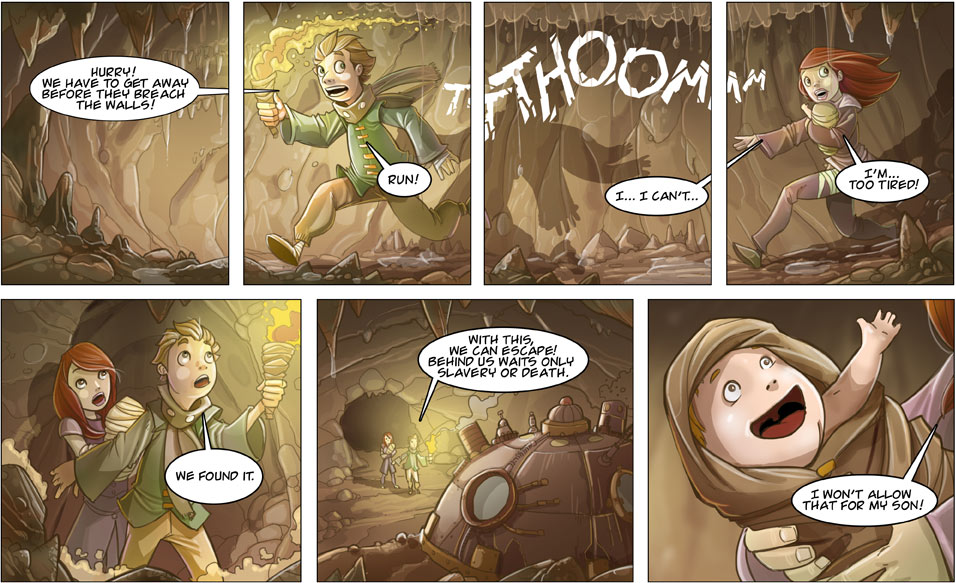 Oliver&Spike are shaping up for GDC 2013

We have been a bit quiet haven't we? Totally sorry about that!

Lots of projects flying around here at the office and as always, we have the Rockpocketeers work on all different kind of games.
There is still time for an update though, on what we have been up to, in regards to our Dimension Jumpers:

We are working on adding the additional game-play mechanics we haven't shown before and get them ready for GDC 2013 in San Francisco. Arnleif has been working on camera related issues and other fun bits here and there. For example, we are making sure if you move the camera it won't get stuck or intersect with props. Believe me when I say you get some really freaky looking views with a buggy camera code. 3D model eyes do NOT look funny from within the skull..not even if it's a Waba!

A lot of polish has also been done by him in regards to Oliver carrying or interacting with props, as well as Oliver reacting and looking at items close by by turning his head. Small fluff things like this make the world and the game feel more alive, at least that's what we believe. Before Christmas he also fleshed out the actual boss fight you'll be able to try your hands on in San Francisco. Tastes like chicken!

Lill has been working on additional animations for Oliver, such as throwing, rolling and carrying different quest objectives. This asked for some special attention since the different dimensions influence Oliver's animations in different ways (just think of Aqual which is under water compared to Firma with lower gravity). Quite a bit of a challenge there but also a lot of fun.

Conny on the other hand has been working on one of the first Quick Time Events (QTE) which will be available to play through at GDC. Several outcomes, depending on if the player manages to react fast enough, have been fleshed out in beautiful cut-scenes. Some more hilarious and funny then others ;)

He also added proper facial expressions for Oliver which are triggered during game-play and is now moving over to fleshing out proper fighting animations.

Yup, even though Oliver&Spike is an Adventure Game with Puzzle and Platform elements, there is also some fighting involved (other than the actual boss fights). However, fights with actual creatures in the world can be avoided if that's not your thing. It's all up to you really. We have a lot for you to try out should you attend GDC and visit us for a test run. Trond has been filing on the fighting animations and the responsiveness coding wise - no easy task to make it not only look but also feel good while playing.

Henning is now polishing up the QTE cut-scenes and adding them to the actual Unity Scenes for further use to actually get it ready within the game mechanics. As mentioned: should you happen to be at GDC in San Francisco make sure to come by and say hi (more on that topic later!).

From 2D concept to in-game

We think it's interesting to show what the concept images looked like and how we translated it into the game. Here are a few examples :)

This is the 3D Model Render of one of the first bosses waiting for you in Oliver&Spike: Dimension Jumpers. We show it to you because you'll see it in...

Nox and Chyme come to life

We take Nox and Chyme from 2D Concept to 3D Models

What if your game had changing and evolving game-play, challenging you in new ways constantly? What if the game-play was a mix integrating two genres...

Very beautiful and interesting game. Well, actually it's looks like most promising game in a long time...

Thanks a lot Irenaart, that's certainly a great compliment :)

Very beautiful game!
I wonder how much work it takes to create a specific area with different dimensions. Are the environment objects (animals, plants) hand-placed or is there some kind of function behind it?

Hi Martin and thanks a lot for the compliment :)
All the dimensions are built manually and every object placed by hand.

Just joined IndieDB with my own team, and this is inspiring! Keep up the great job!

Hey Elydustin, glad to hear that! The best of luck with your own project too :)

Please port this profile to ModDB and Desura. There is an option which allows you to have the game on several fronts since all of them basically use the same DB. This game deserves more attention and it wont be getting it here alone, ModDB has the most traffic (almost double what comes here) and desura is more visually pleasing if you ever wish to sell you game. So I strongly recommend giving them a look.

Thanks for the Tip and commpliment Mv :)
It's also linked to modDB but Desure requires you to be not more then 6 month from release and we can't commit to a release date just yet.

it looks awesome and original. If it comes to steam now, I'll pre order instantly - which reminds me, how much will this game cost?

Also, you put this game under iPad? I take it you mean the New iPad (3), cause I think the game is a little too resource heavy for iPad 1 and iPad 2.

We don't know yet (about the price).