Ocean Rift is a Virtual Reality experience that immerses you in a vivid underwater world. Inside Ocean Rift you will find habitats full of wildlife, including dolphins, tropical fish, turtles, sea snakes, rays, sharks, whales, and even extinct prehistoric reptiles!

Thanks for voting and helping Ocean Rift on it's quest to become the 2022 Indie of the Year. You are now in with a chance to score some free games. Help this game secure more votes by embedding the widget (or link) we have included below on your favorite sites.

Ocean Rift originally launched for the Samsung Gear VR, but Welsh developer Llyr ap Cenydd has been experimenting with the use of the HTC Vive's motion controllers to allow for swimming-based locomotion. In the above video, originally posted to Llyr's YouTube Channel, the developer demonstrates how using the motion controllers to simulate swimming motions can move the player's first-person perspective in all directions.

Additional directional control is offered with a small propeller that extends out of the end of one of the motion controllers, and can be toggled on and off. The experiment shows just one novel solution to the issue of locomotion that VR games which don't require the player to remain stationary need to solve.

An earlier demo of Ocean Rift can be downloaded from Llyr's personal homepage. Check out his other prototype for the Oculus Rift, Crashland, too. 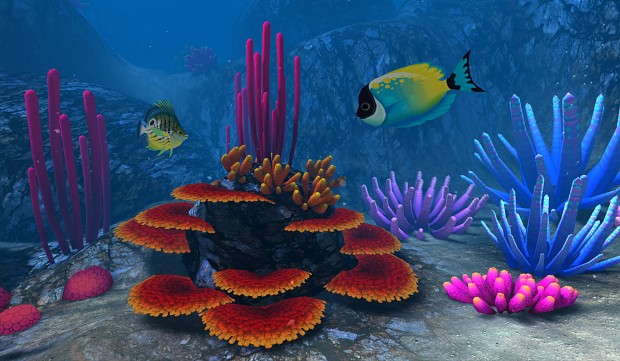 My name is James Elligson and I am the Chief Operating Officer of Ctrl V Inc.
I would like to discuss your experience Ocean Rift and the potential to offer it within our LBE facilities across Canada, the U.S. and Costa Rica. Should you have an interest, I would be grateful if you could connect me with a member of your team who handles business development and commercial agreement discussions.
Wish you and your team much success and thank you for your time.

This is amazing! May I ask what you did to make the water surface? I have had little to no luck with my methods :P

This looks incredible! And the sound design is great!