MMM is a visual novel adventure with an open-ended mystery that puts your deductive skills to the test. A murder occurs in a secluded manor, and if you can't find the killer in time, you just might take the blame for the crime yourself! Gather information and search the house for clues as you form your own conclusions about the evening's mysterious events.

It has full-English voice acting, and text in English, Italian or Spanish.

We're the Foolish Mortals, a small indie team based in the flat and desolate wastes of Saskatoon, Saskatchewan, Canada. Read more about the game and us here: Foolish-mortals.net

It's been a year since I released my first game, MMM, so it's time I did a proper post-mortem of it. I think there are definitely some useful insights to be gleaned from it.

MMM: Murder Most Misfortune was released May 1st 2017 for Windows, Mac & Linux on both Steam and Itch.io. It is available in English, Spanish and Italian. MMM is a short murder mystery visual novel game, inspired by British murder mysteries by Agatha Christie (such as Poirot) and the Ace Attorney series. In it you play as Miss Fortune, a widow nine-times over. Miss Fortune is invited to a secluded mansion for a dinner party where a murder occurs, and she is framed. The player must then talk to the other guests, and explore the mansion to figure out what happened before the police arrive and come to the wrong conclusions.

The game had multiple endings, where you could frame any of the characters with murder if you had enough evidence. It took between 1.5-3 hrs of play-time depending on how many endings you do. Each line of dialogue is fully-voiced, and you are able scroll through rooms in a point-and-click style to find items of interest. We also had an optional timed mode, where the player had a limited amount of real-time to explore the mansion before being forced to make an accusation before the police arrived. MMM was made mostly between four people: I directed, programmed, my brother wrote the excellent script, and a friend made all of the art, and another friend did most of the audio engineering. It took ~2 years of part-time work to finish it.

Critical Reception: Although not having too many Steam reviews, the vast majority are positive, with 25/26 of them being positive. Many reviews mention the quality of the voice acting, and the writing itself. Unfortunately we did not get any large media outlets of note to cover or review the game (only a few extremely small sites). We did distribute keys through key-mailer, and had a few small youtubers play through the game. Here's a picture of the steam achievements 6 months after launch, which can be used as an estimate to how many people actually played the game, and how far they got. 57% of people had finished the first chapter (~20 minutes of gameplay), and ~37% had gotten at least one of the endings. When sales slowed to a crawl, we recently put the game on a bundle. This understandably drastically lowered the achievement rates. Overall, the game had a median play-time of 2.5 hours.

Sales: Although I can't be too specific about Steam sales numbers], overall they have been low (~1k sales). Sales followed the usual pattern of having the most purchases in the launch week, having almost no 'organic' purchases when no sales are on, and substantial spikes in purchases during sales. As can be seen from the regional sales chart below, the majority came from the U.S., with Germany, U.K., Canada, China and South Korea following belatedly. Japan had fairly low sales. It is difficult to surmise how well it would have done if there had been a Japanese localization (which would've been very expensive), but I have heard that western visual novels are not so popular there. Surprisingly, only 38% of sales came from primarily English-speaking countries (U.S., U.K., Canada). A quarter of our sales came from 'other' countries. This is significant, and it is possible the Spanish and Italian localisations helped with sales from these 'other' countries. 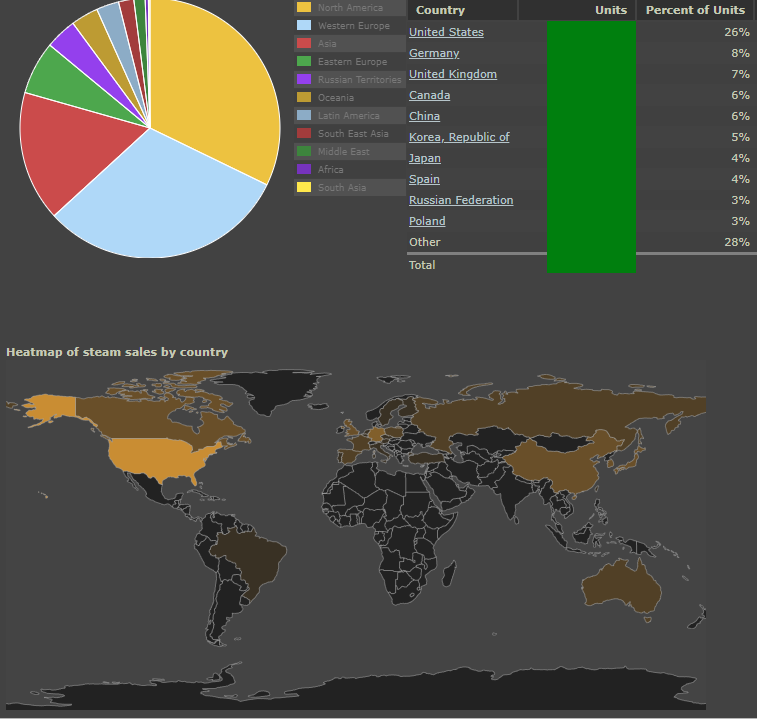 Why the low sales? Although we had positive user reviews, overall sales were disappointingly low. We now enter the realm of speculation and list some possible reasons why:

Itch.io: The game is available on Itch.io as pay what you want (which we think is the future of digital purchasing). We’ve had close to 2.5 times the downloads compared to Steam, but only 16 purchases. We don’t believe this affected the sales on Steam, as the audience on Itch.io are quite distinct than the Steam audience, but we can’t confirm this. Our goal is to make people happy by playing our games, so we’re not disappointed when people who would otherwise NOT buy our game have a chance to try our game.

Only after a year have we finally covered all outside expenses (not hours spent writing the script or coding), making the game a financial failure. Overall though, we're proud of what we made, and had a good time making it. Despite the financial aspect, we've learned much from making this game, and are considering a sequel (involving Egypt, a mummy, and of course, murder).

Try out a few of ours levels, and battle the nefarious Disco Dan! Now updated with difficulty tweaks, new UI and improved boss fight.