Metagolf is a mini-golf game with multiple challenges. Up to 4 players can compete on the same screen, sharing the same golf ball and the same goals. Team up for loads of fun with friends or play alone to improve the accuracy of your swing across 3 different platforms (Windows, Mac Os X and Linux). More focused on action and real time strategies than a traditional mini-golf, discover full interactive environments from fish ponds to breakable chains and deadly traps. Thanks to his built-in level editor, you can create, share and download new courses. Currently available in two languages, English and French, Metagolf let you reuse any provided content or make new one from various media to create your very own world. Change the realistic physical system behaviour or combine any game mode with exiting different type of golf ball. The choice of setting your own game play preferences is entirely yours !

What it’s all about ?

Metagolf is a platform action game for 1 to 4 players.
It’s like Mini-Golf but crazier since everyone is playing at the same time with the same golf ball. Unlock interactive championship courses with creatures, puzzles and 7 different kind of balls or team-battle on the same computer through physic based obstacles and mazes.

The game is available in English and French. There is a level editor to create new courses but also change the visuals, sounds and physics of it!

It is now more than 3 years that I’m working on this project alone with my own savings.
I’m currently jobless but pursue a consuming desire for a career in video games.
I’m available all over the world !

The idea behind Metagolf was to build a modern in-house game engine allowing me to produce more ambitious and great games in the future. Now that the project is getting mature, I hope you will welcome this first title and enjoy it as much as I enjoy making it after all these years.

I am looking for a publisher or anything that could help me in my adventure so don’t hesitate to contact me here.

TRI and 8 other games are together on KICKSTARTER

A small update to include a few requested features :-)

Metagolf is a platform action game for 1 to 4 players.

Much effort has been invested in this new version. Your feedback greatly help me to improve some aspects of the game: Thanks a lot !

Been a LONG while since I last made my levels. Anything new, besides having to pay now? ;)

Hi
The game as been released since :)
It stayed in beta for a long time to make sure no one had serious issues and listen to suggestions.
The level editor did not change much so you should still be able to play your levels :)

About the price, it's less than a Belgian beer !
And to tell the true, since the release I was only able to drink tap water...

Yay :D
So now ? Time to plan another game, make another pack of free levels or both ? ^^

Just popping in to say that I haven't forgotten about the game :)

Just popping in to reply that I don't forgot either.
It's nice from your side :)

I wonder why the email notification of Desura isn't working when there is activity on this page !?
Anyway, I don't know if you saw lastly but I finally release that update I was talking about.
I still need to produce a trailer or something to catch a bit more attention on Metagolf...
Thanks for popping in ;-)

Hi Lunick
I'm currently trying to save a bit of money on my own to revamp this project but things aren't going as fast as I want. That's basically all I'm waiting before leaving the alphafunding phase :-)
I do have an updates correcting the player animation sequence and various other small things, but I was waiting to complete the revamp first before releasing it.
I did not plan any other updates soon but I'm listening to ideas and I'm open to any suggestions, so don't hesitate to drop me an email about that if you want.
I don't think that the level system will change much in the final version so anybody can start making his own campaign or levels in the editor right now :-)

Really fun game, I wish you had gotten fully funded with the Kickstarter.

Yeah me too Lunick :)
Considering we were giving to a lot of others games and developers a chance to see the light of the day. But it's not so grievous for Metagolf, we were just testing something new while trying to be as generous as possible. Each backers received a 75% off coupon and since many enjoy the soundtrack, it will stay accessible under the Metagolf data files rather than being encrypted in the executable like planned before :). So everybody win a little something in the end of this "Kickstarter bundle" experimentation.

Now regarding to the improvement of the game I must admit I did not reach the required amount of money to hire a professional graphic designer and revamp a few things like Players, Backgrounds and artworks. but I hope to release a trailer soon to invite new gamers to try and enjoy Metagolf like you :)

I'm thankful for each person's giving me feedback on Metagolf and I'm pleasantly surprised most of that's comments are very encouraging and supportive. This is something really great when you are working alone on such project, and for so long, as I wish to go full time on this job one day but currently can't afford it.

Thanks again for the kind words and see you at the game premiere :-) 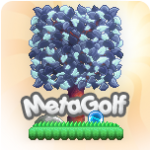