The prince has been kidnapped. The royal guard, known as Renova, has gone missing.Aether has returned... As Magnetta, only you have the power to stop him!

Magnetta is a side-scrolling action game in the vein of classic NES titles. Jump, slide and blast your way through more than 10 unique and challenging levels as you collect new weapons, hunt down secret areas, and defeat your enemies to ensure peace in the galaxy.

Check it out on Steam!

Take on the levels in any order you want. Beating each level nets you a new weapon, which you can use to reach areas, grab items, and defeat enemies in new ways.

You'll need to master every skill at your disposal if you're going to climb Aether's tower and take him out once and for all!

Kick butts faster than your friends could ever dream of! We built the game with speed running in mind, find and take advantage of built in short cuts and zips to get the fastest times. 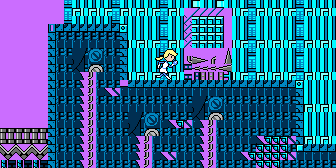 Fight your way through scrambled up levels where the tilesets shift and change around you. Everything looks like you've got a dirty cartridge, and you'll need to know what you're doing to make it through.

Take on a range of themed challenges based on weapon requirements, limited HP, limited time and more. Do you have what it takes to clear them all?

Use your weapons to find collectible circuit items in each level to unlock various cosmetic changes, new modes, special items and more.

Magnetta’s soundtrack is composed entirely using Famitracker. That means the sound is authentic as possible, and the songs could be played on an actual NES. Check it out here!

Like the soundtrack, we want the game to have that classic look and feel. Magnetta uses the same color palette as the NES. 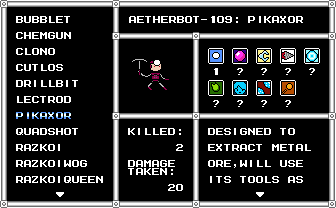 The bestiary is a database for every enemy in the game and all of their strengths and weaknesses. As you experiment with different attacks, the bestiary will keep track of what works, and what doesn't.

These are just a few of the enemies you'll encounter in the game, stay tuned and follow us here, on twitter @heliocstudios, and on Steam to see more.

Polishing up some stuff

A look at some of the improvements we've been working on.

Here's a look at a few of the enemies you'll fight in Magnetta!

Here is a look at one of the weapons you'll find in Magnetta, the Chemical Shot!