-Mage War Online Version 0.1 (Pre-Alpha) is here after a year of hard work. For the last few weeks, I’ve been putting everything together to make a stable version of my Rogue-Lite game. However, there are still many things to add before the release.

The skill system has currently 22 unique skills. Depending on the armor the player is wearing, he will be able to choose few skills. There is no restriction to which skill the player can use. With fragments obtained by killing monsters, the player can increase the level of a skill, increasing its effectiveness. There are other ways to increase the level of a skill, like hats (equipment) and classes. Each skill has up to 3 runes that add different effect to it. They are obtained by killing elite monsters and can greatly improve the value of skills. 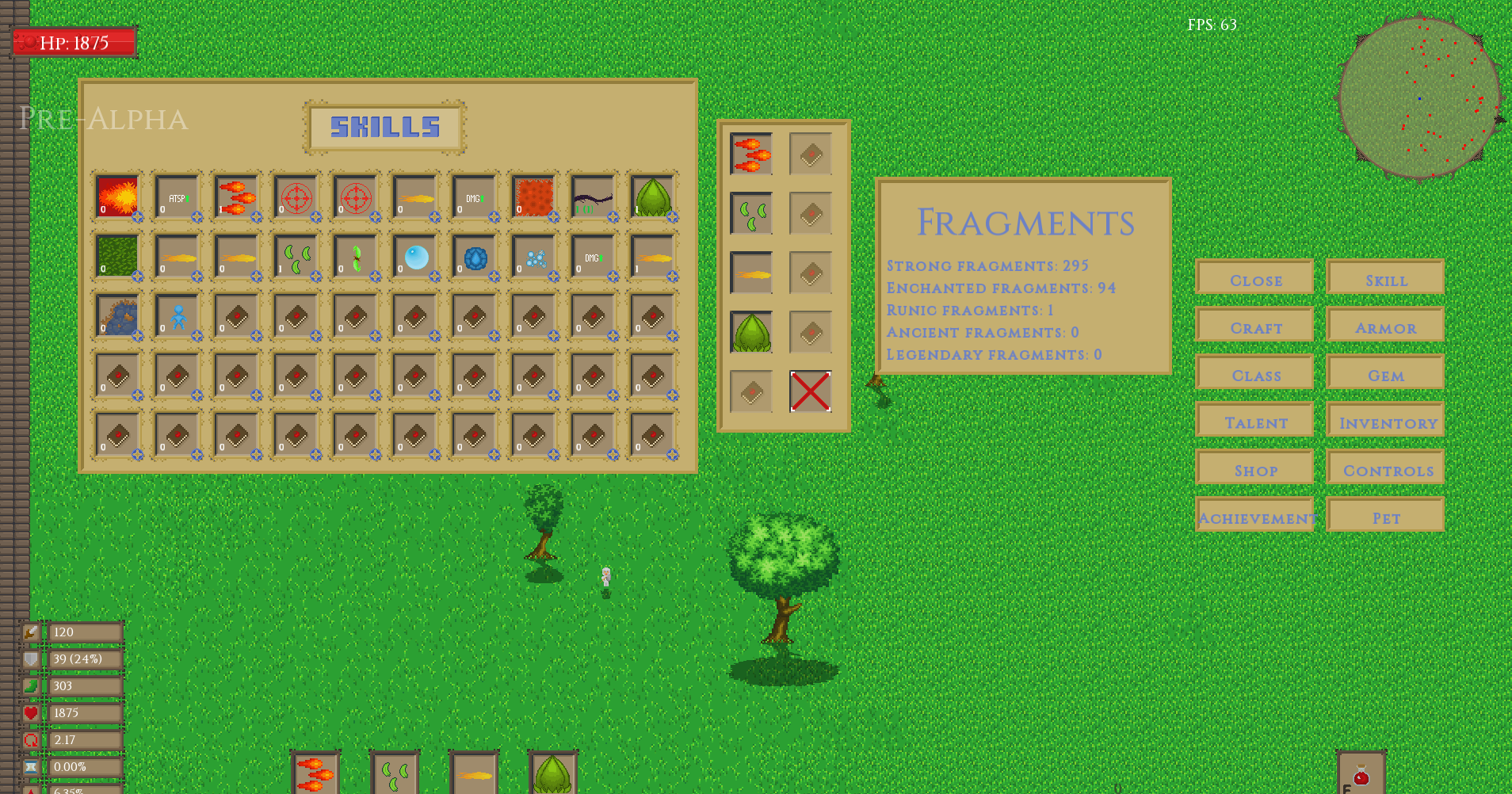 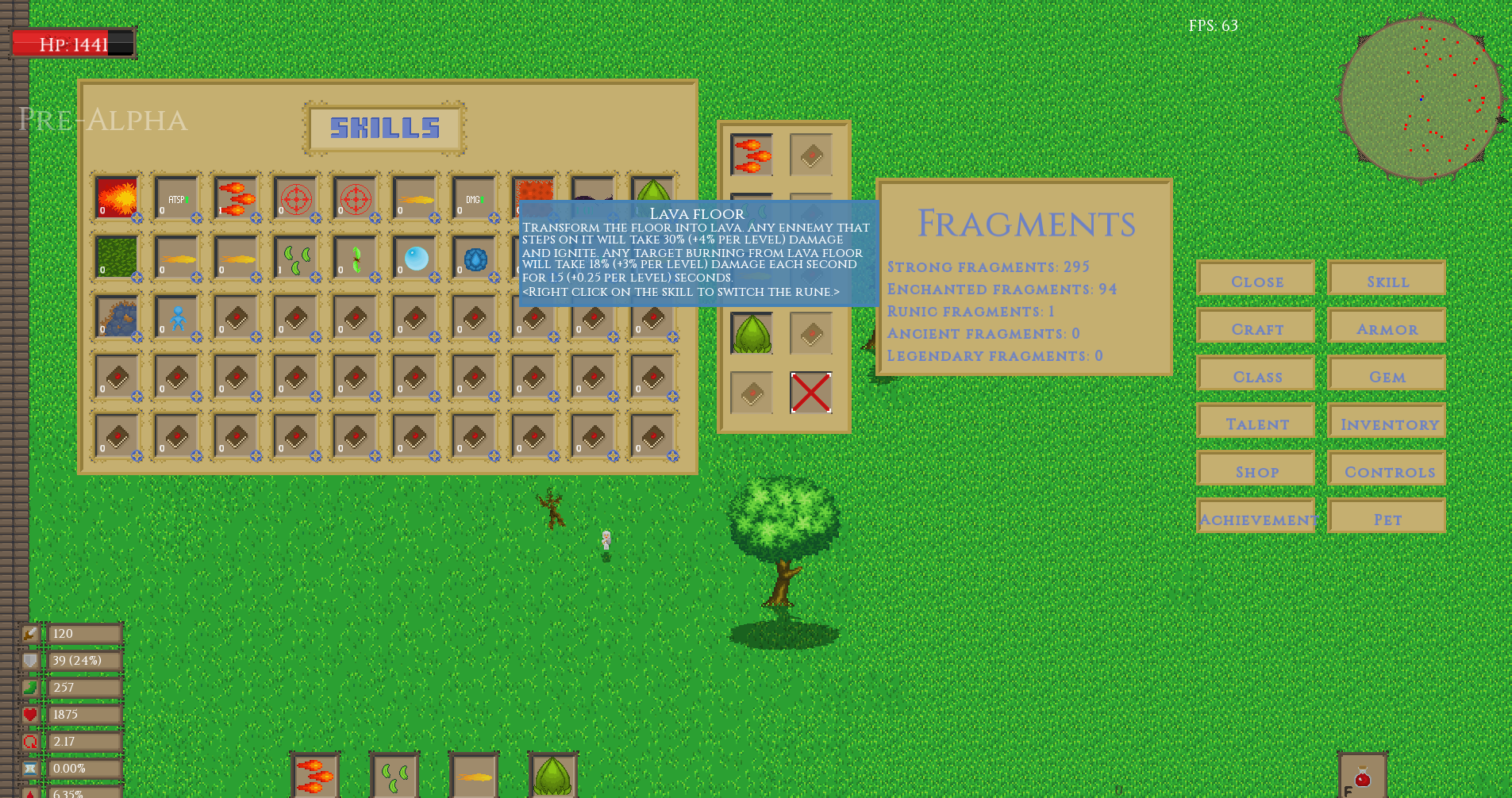 In MWO, there are 3 skill trees with 9 talents each. Each skill tree has its own purpose; damage, defense and utility. The player gets 2 talent points for each level. There are 2 types of talent, normal and epic. Normal talents can be increased 5 times and give great bonuses to the player’s stats. On the other hand, epic talents can be only be increased 3 times, but they can be game-changing and some builds might rely on them. At maximum level, the player can have up to one full skill tree and a half. 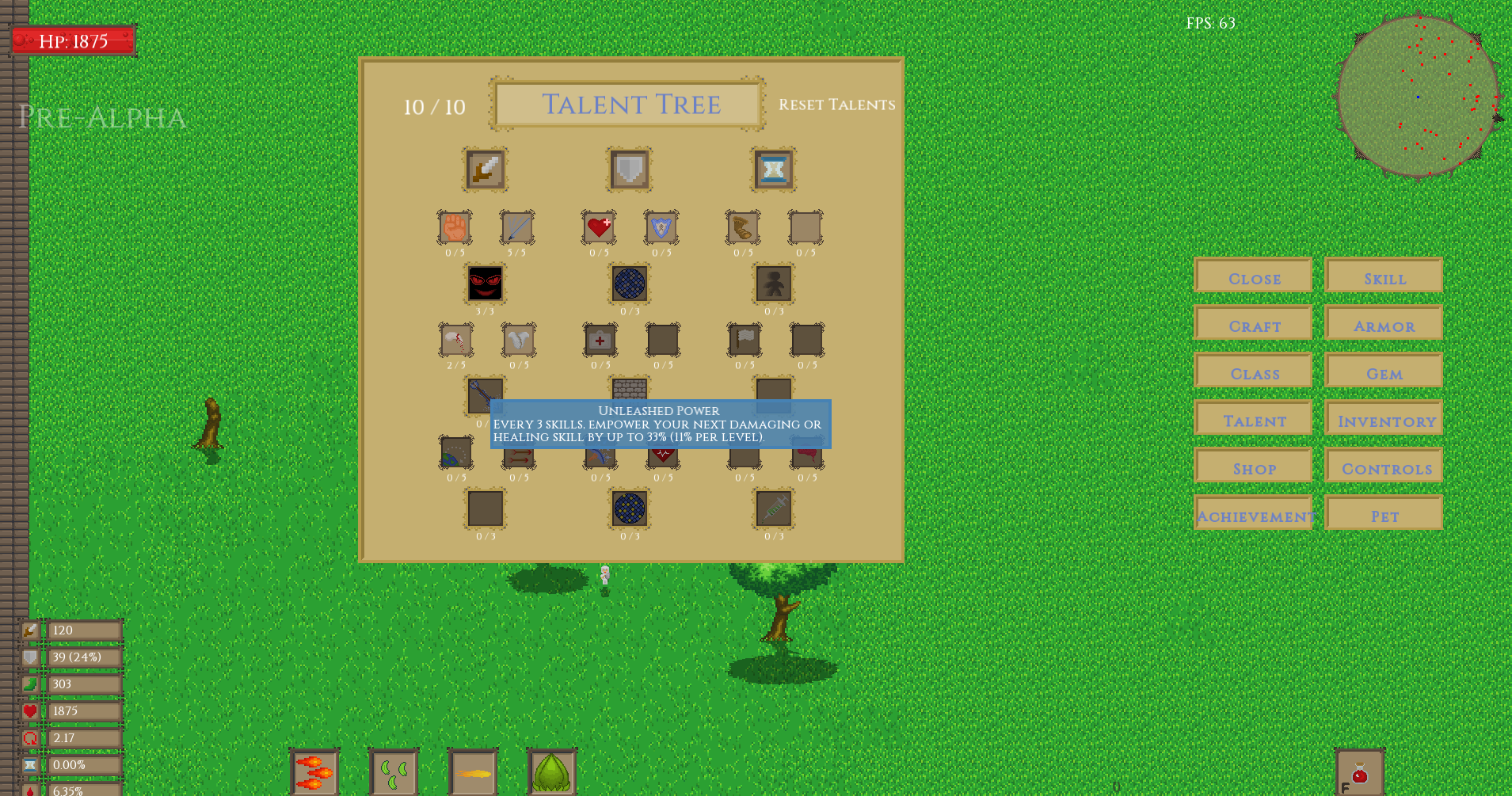 The crafting system allows the player to make a weapon. However, there is no recipe. The player must gather resources around the map like magic sand, sticks and minerals (iron/ruby/emerald/topaz). When crafting, the player can choose the level of the weapon being crafted by increasing the number of sticks consumed. Then, the player can increase the number of sockets in the weapon by adding more magic sand. Afterward, the player can choose which type of bonus (damage/defense/utility) each socket will have by embedding minerals in the sockets. If crafted, the weapon will have a number of bonuses based on the choice of minerals embedded in the sockets. The value of the bonuses will depend on the weapon’s level. Armors are important in Mage War Online. They determine the number of skills the player can use at the same time, the number of scrolls that can be equipped, the number of gems that can be used and they give a bonus to the player. There are 33 unique armors. Each of them has a level requirement. While leveling, the player will be able to buy a new armor at every 2 levels and will have to choose between 2 armors, the normal version and the plus version. Each of the two versions offers different things. At level 20, the player will have access to the end-game armors. Each end-game armor is oriented toward a specific build like more gems, more scrolls, more skills or more movement speed. End-game armors also have a second version that offers the same bonuses, but are better overall. 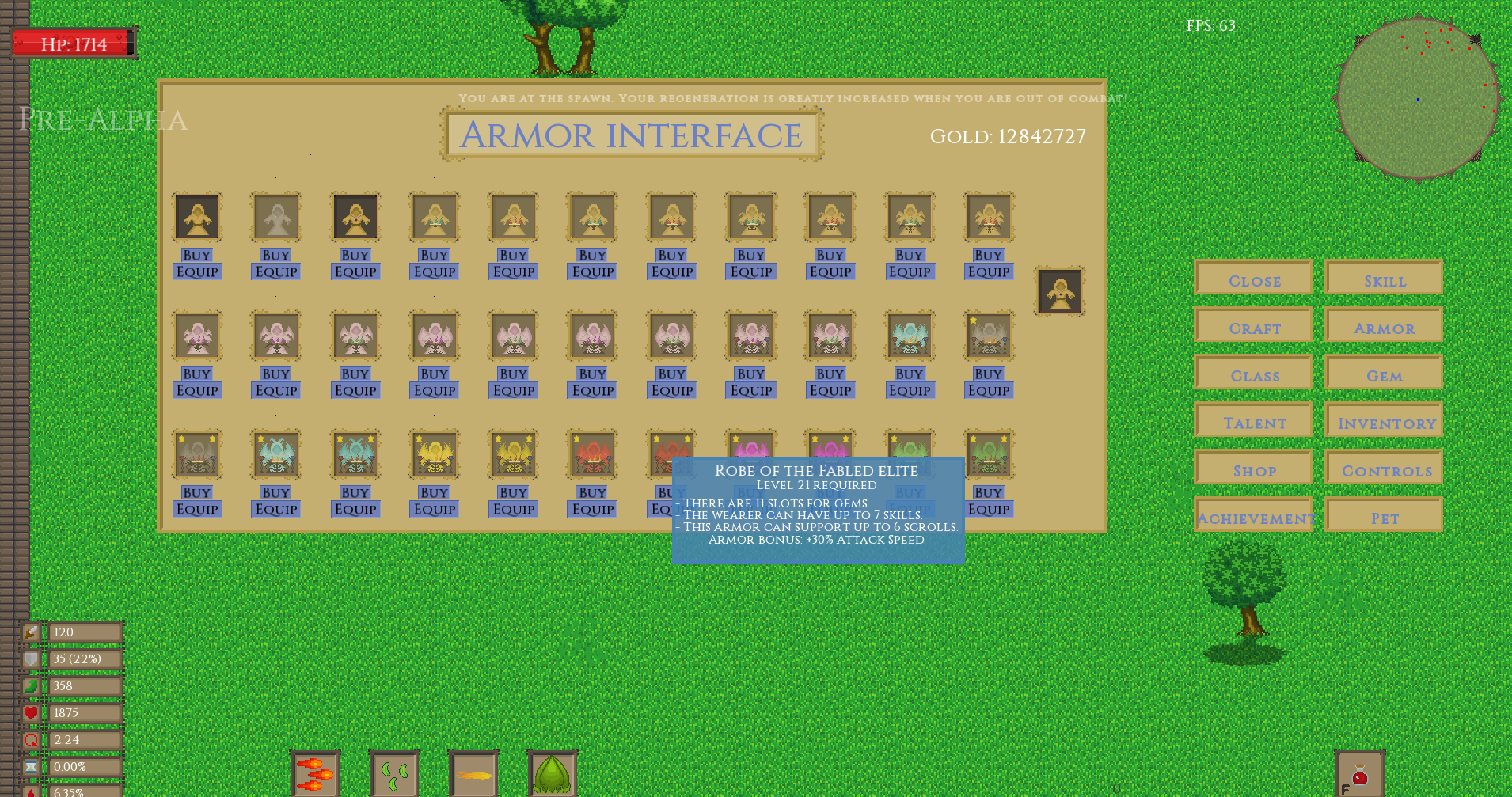 Pets can be of great help to the player by attacking enemies, giving buffs to the player or simply by increasing the player’s stats. Pets can level up and at every 5 levels, they will unlock a new ability. At level 1, they get a basic attack. At level 5 and 15, they get one skill. At level 10 and 20, they get a passive skill. The pets’ ability system is composed of 2 skill trees. Only one ability can be chosen between the 2 trees each time. The pets also get 2 attribute points each level that can be spend in 4 attributes; Power, Intelligence, Wisdom and Speed. Each one increases the pets in his own way. There are currently 3 types of pet; fairy (healing), ninja (damage) and knight (tank). 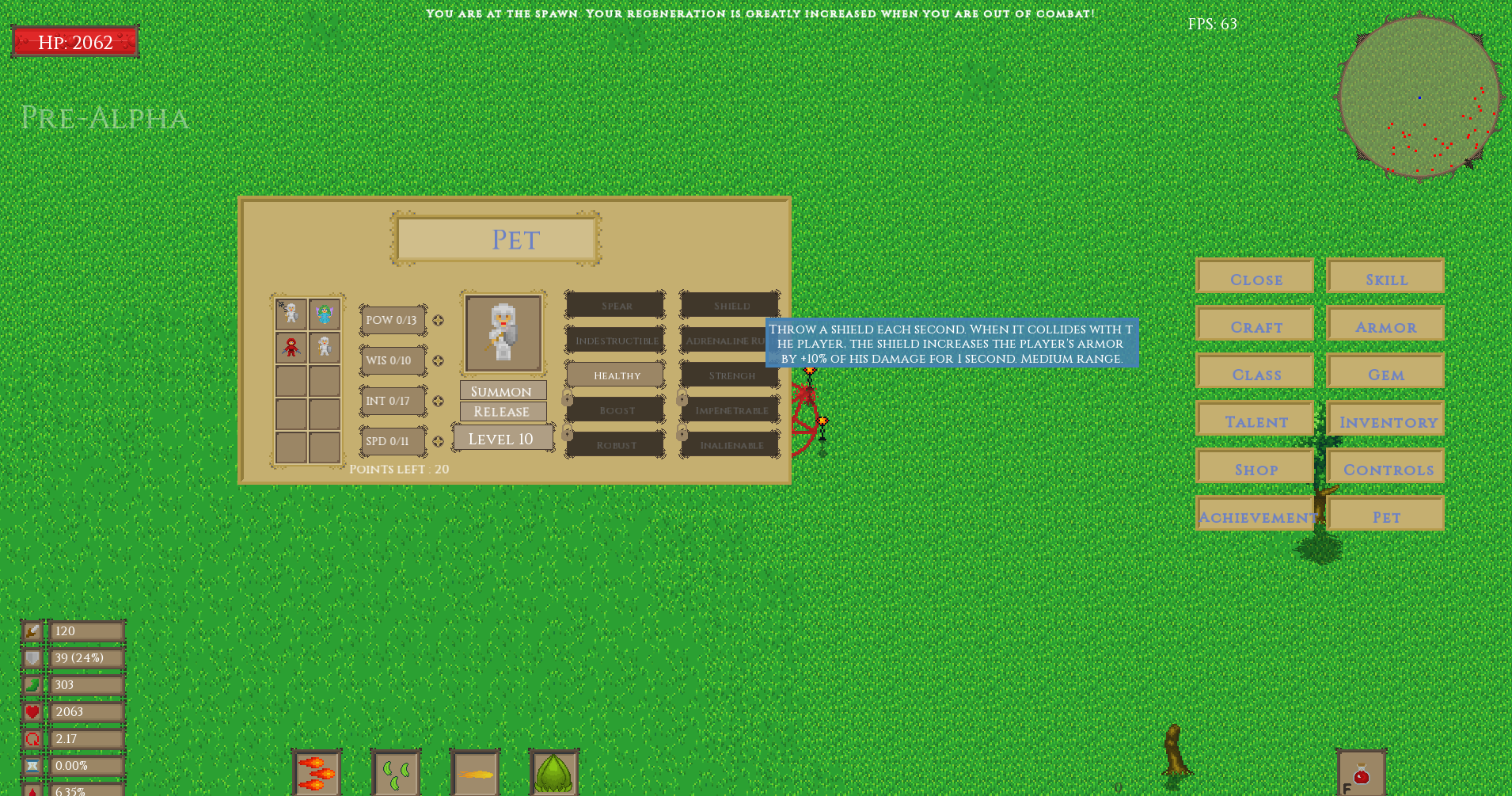 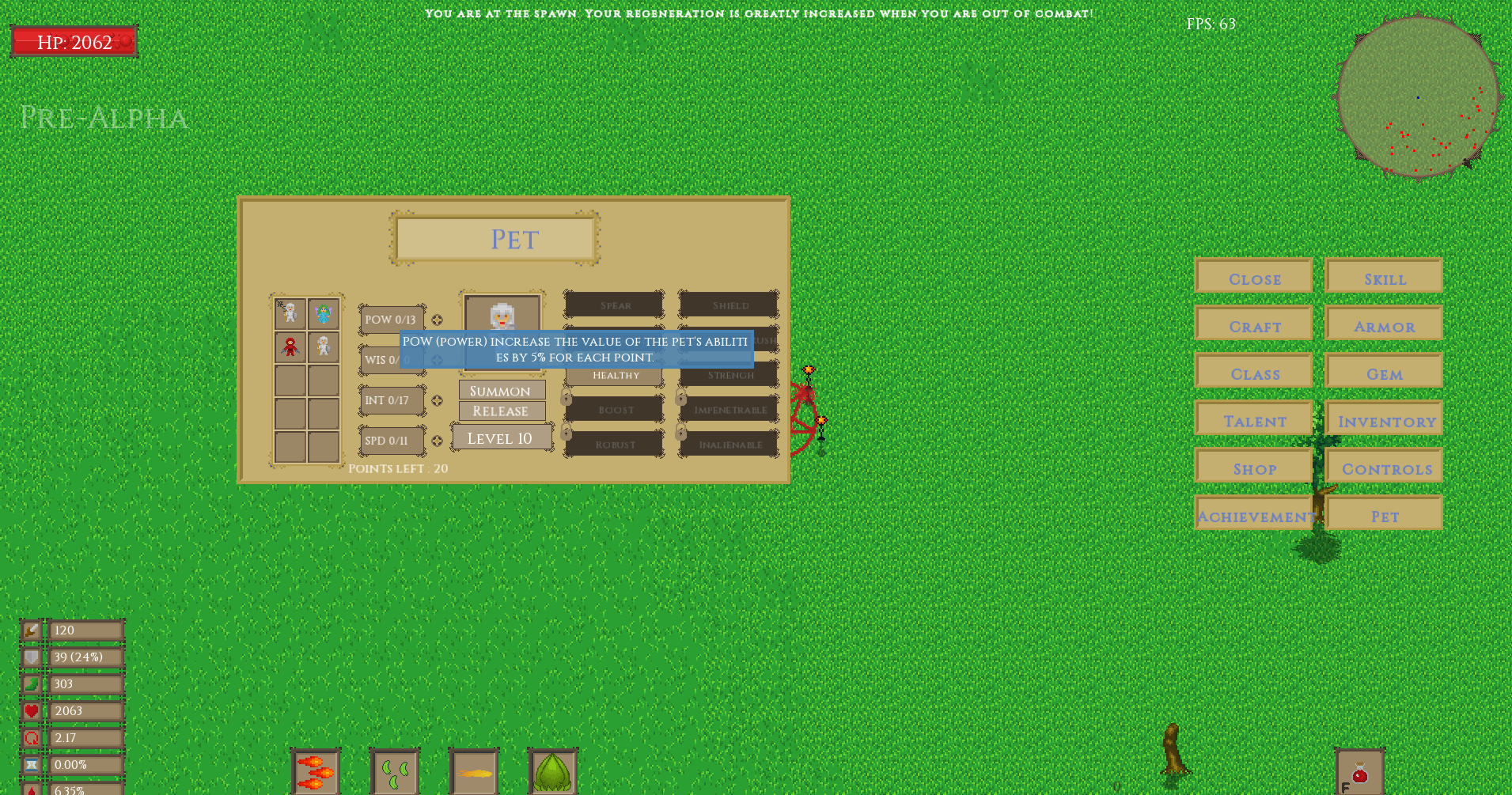 The player will be able to purchase gems for golds. Each type of gem increases a stat; damage, armor, speed, maximum health, etc. When buying a gem, the player will have to choose the tier of the gem. Tiers affect the value of the bonus and the price. The gem system is a great way to get some stats that the player’s build lacks. 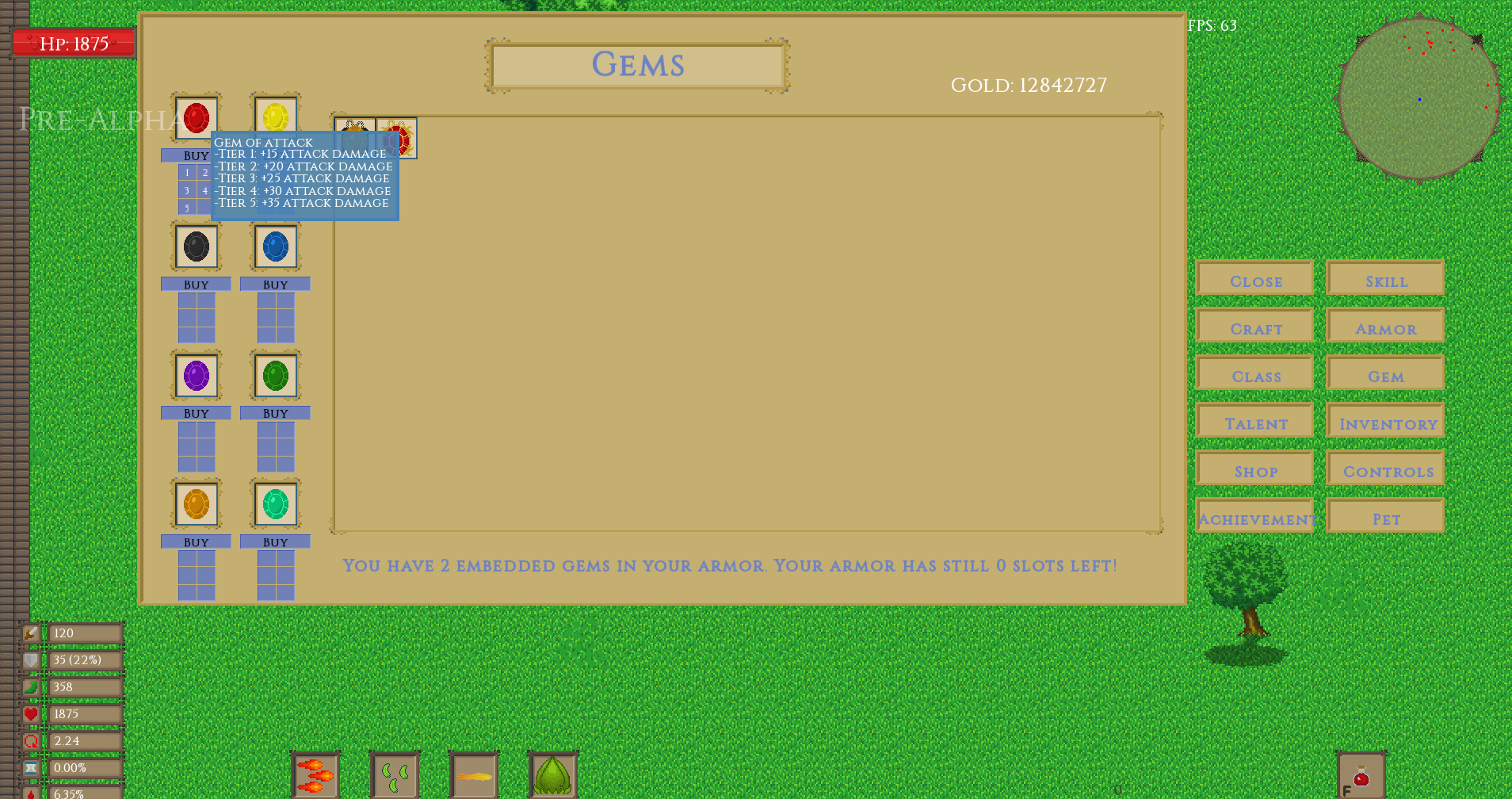 The player can currently choose between 4 classes; Fire, Grass, Water and Rock. Each class has 6 skills that are related to it. Using skills related to the current class will increase the skills level by one. Classes also change the visual aspect of the mage and determine the basic attack of the player; fireball, vine, bubbles and boulders. Each basic attack has its own mechanics and visual effects. 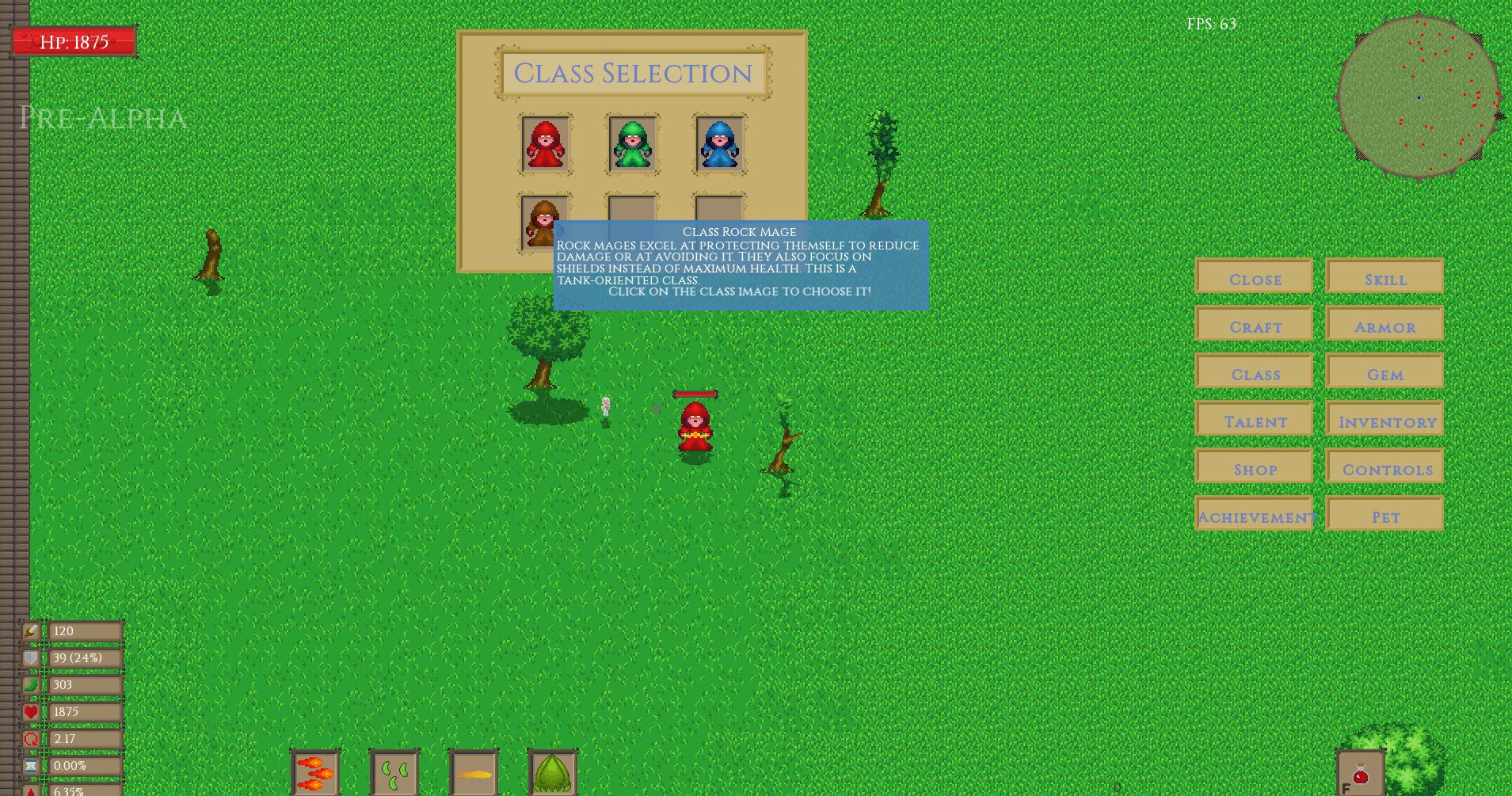 There are many achievements that the player can get along the journey like killing monsters, avoiding damage for a set amount of time, reaching a certain point, etc. When successfully getting an achievement, the player will unlock a new scroll related to the task of the achievement. Scrolls give the player unique bonuses like increased radar range and immunity overtime. 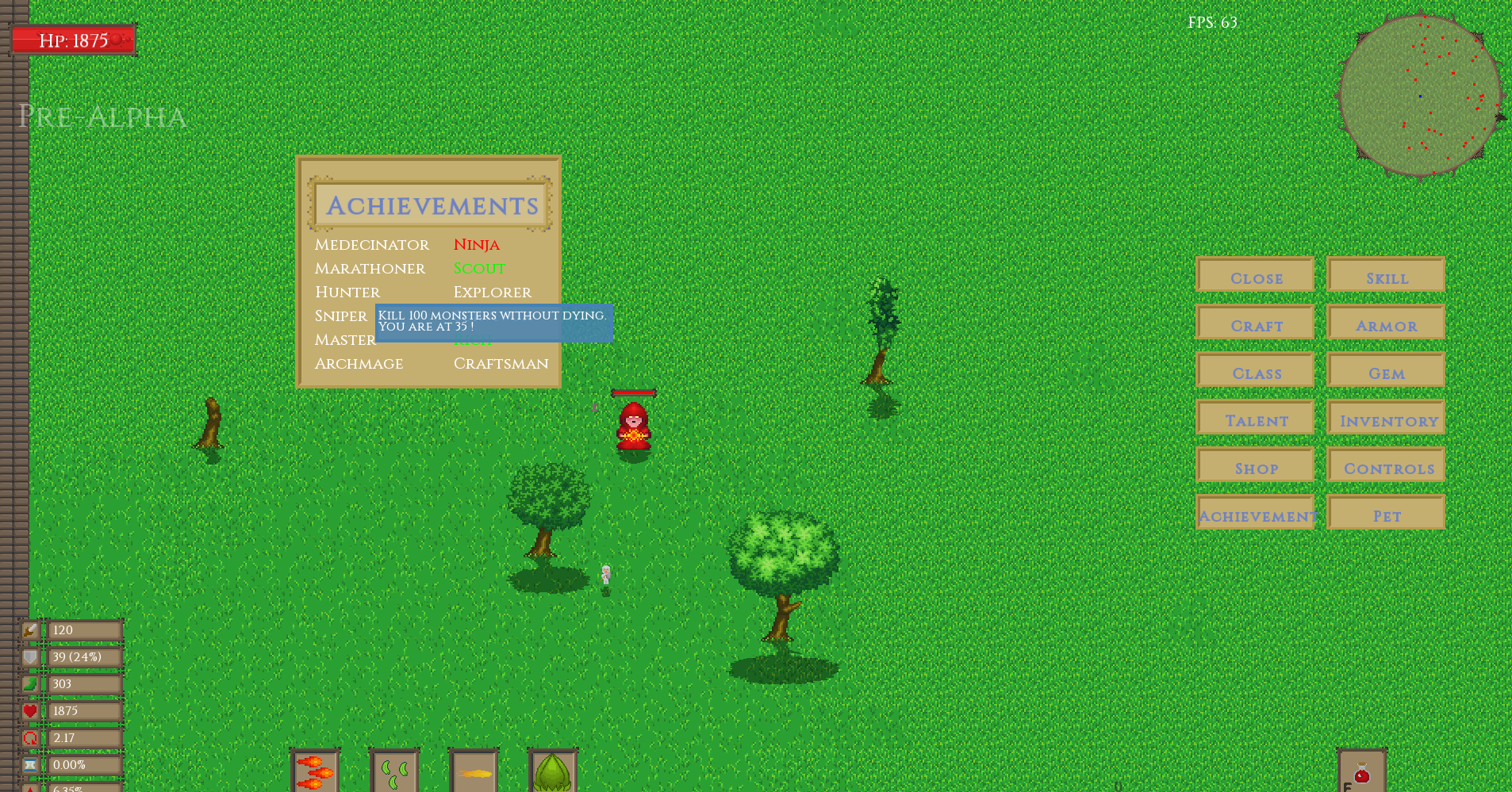 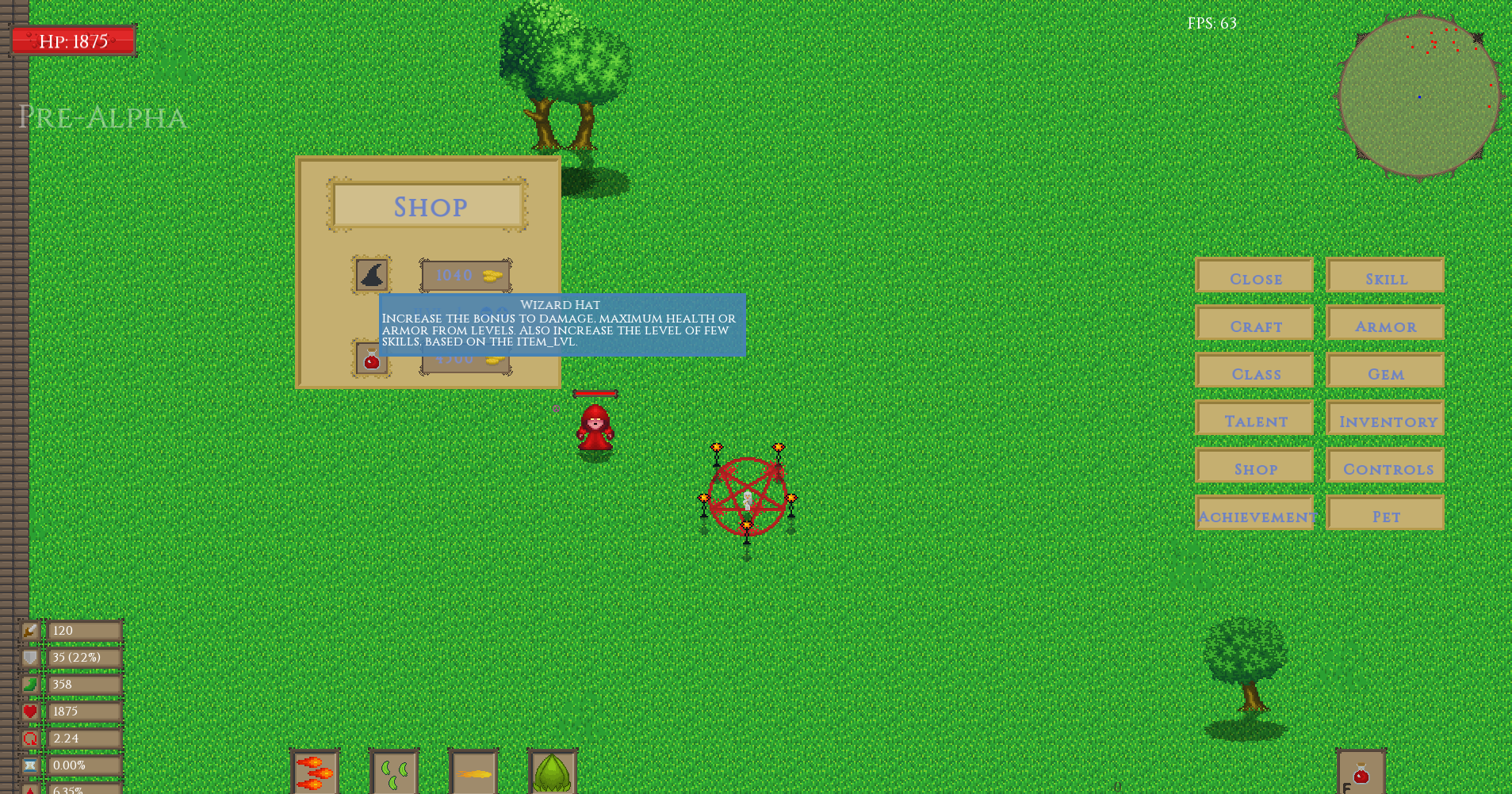 Upon death, the player can choose to select between 5 mages with 4 characteristics. Two of them will greatly increase a player’s stat while one will slightly decrease one. The last characteristic is a major drawback like random teleportation, decreased radar range or deviated basic attack. 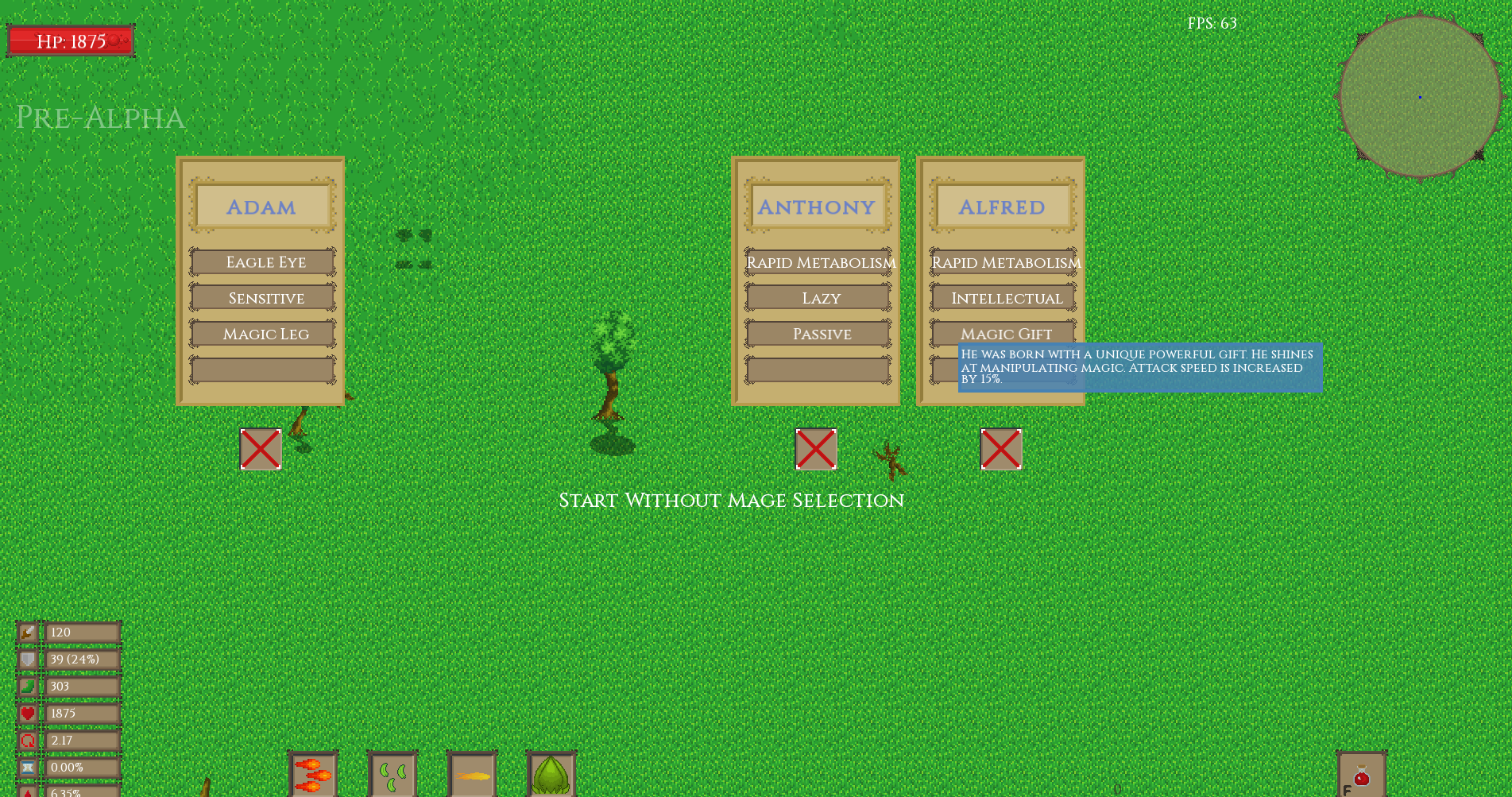 Image grass tile (before & after :

This week, I worked a lot on the development of the website, but I still managed to add some few things in the game! In the video above, you can see some gameplay footage of the last version of my game with the monsters' death animations.

-New sprites for each monster; elite and guardian versions
-New grass tile
-New hill tile
-A death animation for most of the monsters
-Reduction on the cooldown of most of the skills*
-An indieDB page

*To increase the pace of my game, I decided to decrease the cooldown of the skills. I don't want the player to be shooting only only basic attacks to fight monsters!

Since the website is pretty much done, I will work on the visual aspect of my game. I currently did new grass and hill tiles, but I want to redo the dirt, the stone and the trees! I invite everyone to create an account on my website. You can add other members as friend and you can create your own groups!

Major update! I added quite alot of important contents this week!

Few weeks passed since the last updated! I added some images in this one!

A really short update to show you guys what I've done!

Here's the new content I added in the last 2 weeks! Hope you enjoy