Post news RSS Your Feedback and My Next Steps

Thanks to everybody who played the previous alpha versions and provided some feedback! Here's a short overview of the feedback I received and my thought about it. Further, I will give another outlook on what's up next with the game.

One of the things many of you were annoyed about was the lack of continuous fire, while others still enjoyed that when you just tap the button fast enough you could fire real fast until your hand starts hurting. I liked them both so I ended up with having continuous fire when you hold the button with an okay rate (which you can upgrade through rare item drops) … still you are welcome to tap the button for a faster rate.

Many of you didn’t like the limitations of the map to the left and the right. Well, I don’t particularly enjoy them either. What I am looking for is some kind of wrap-around behavior or even an endless sky to the left and right. Since I am a programming n00b I do not have a clear idea (yet) as how to deal with that but I have a hunch it involves creating the background elements on the fly with a random-fractal function. So I’ll look into that but for the immediate future the current model won’t change. Let me know how big an issue this is for y’all.

It wouldn’t be a proper alpha-test phase without loads of feature requests and ideas. So I have begun populating lists with the requests. The lists are Sure thing!, Sounds Interesting, Maybe, and Hell No!

First of all you want more items. That’s good and healthy and I also enjoy implementing new stuff like that. More items in the next releases might be (= no guarantees!): Bigger bullet damage, different weapons, HP upgrade, invulnerability, smart bombs, or armor. These all sound interesting to me and I will implement them when I am bored with what's there so far.

Bosses. Everybody hates bosses at work but in games we can’t do without. Rest assured that I’ve always had bosses in mind for this game and my fingers itch to design them. If I can pull this off, they will be massive, have different stages and patterns and fill half of the screen.

Right now I feel I am approaching a crossroads: Do I want one "level" where you try to survive as long as possible (with increasingly tougher enemies and the occasional boss) or different stages with a boss at the end. The latter approach would feel more “arcadey” for sure but be also more frustrating because when you die, you die.

The next thing I am still toying with is the idea of some light RPG elements: With each enemy you also earn XP. With every level you advance, you can distribute a number of points on different aspecs of your ship, e.g. weapons power, health, maneuverability, luck or upgrade the points multipler which would give the game a scent of strategy.

Well, I don't know yet. But what would be of fun to you? Feel free to comment below :)

Currently the driving element of gameplay is the highscore. In the latest version the screen still is littered with useless information such as hi-score, hi-frags, etc. and the one important thing is overly cryptic and, let's be honest, totally shitty designed: The score multipler.

The concept of the score multi is is that each time you earn points they get multiplied with the mulipler value. To advance it, you need to shoot ten enemy ships without a break longer than a couple of seconds between frags. If you keep this streak going you can advance the multi up to a maximum of 25. But if your streak breaks only once (= no frag within 5 seconds of the last) the multi resets all the way down to 1 again.

So I've gone back and forth on how to make this the most appealing and informative and without unnecessary clutter and this is the design I arrived at: 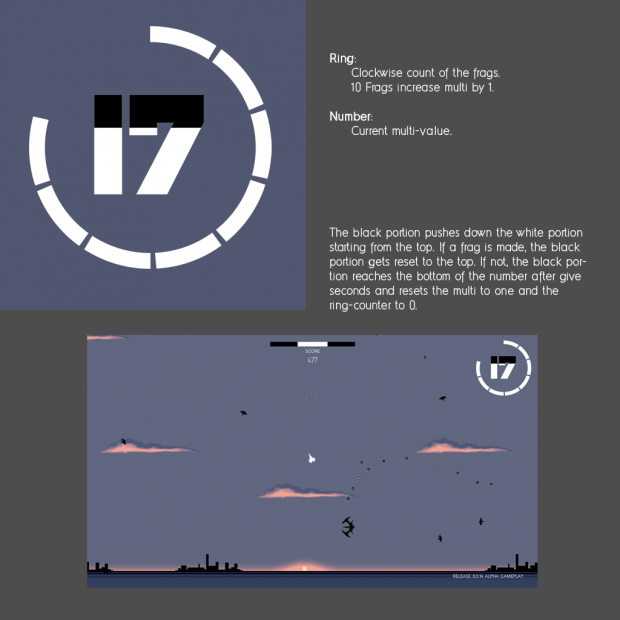 So this is the next step for me: Implementing the multi-widget into the game and tidying up the UI so that you’re not distracted by unimportant numbers but always have an easy grasp on how well you're doing at a glance.

Since this will be a bit more labor-intense than just adding a new enemy-sprite, it will take me quite some time, also because I need some big fat letters in the font I use which won’t design themselves. And then there’s still the coding part!

Yes, the game will have a story that’s somewhat different and still furthers the simple game play. This story will be told by a slideshow at the start of a new game (skippable, of course!) and occasionally with status updates during the game. This story will depart to quite an extent from “traditional” one-dimensional arcade-game plots, so if it becomes to elaborate, I might add an “ARCADE MODE” option to the main menu where players can hunt for points without being bothered by the plot.

Again, feedback and comments in general are highly appreciated and thanks for reading!