Today it’s been seven days since I had started my little Luftrausers-inspired project “Luftwiderstand” and a lot has happened since getting it here on the DB. Here's a description of the current features, plans and where I come from.

(note to self: Save this for autobiography when famous)

Hi. I'm Phil. And Luftwiderstand is my first real game, real in a sense of actually coding more than just a little aspect of the over-ambitioned whole and losing interest after drawing three sprites and writing 30 lines of code. No, this time I am focused on implementing gameplay features rather than dilly-dallying around in Photoshop or experimenting with data-structures I never fully grasped. But who can blame me? I am not a programmer.

Well, despite not being a real coder I have quite a long history attempting to be one, like the guy who knows he can’t dance but never stopped trying (much to the embarrassment of his friends, but I digress). Lately I've came to re-discovered a dusty Steam Sale impulse purchase, the GameMaker Studio, and this time it was different. This time I might have a chance, I thought. 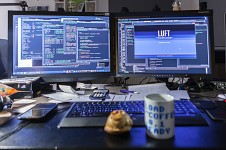 Once I wrote a blog article on my first game-making steps. So if you're really bored and nosy, there's the post on my personal BASICs (haha get it!?) in case you're interested in how such an outsider goes about programming. You can find it here: ► Blog.philstrahl.com


First of all I am impressed with how well GameMaker Studio handles the amount of scripts and custom code I like to litter around and it still feels like my beloved PureBasic (at least most of the time). On the other hand it’s a bit limiting not being able to set my own data types or do some more branched out class/object- inheritance and some other stuff I’d like to try. But the compiling speed and ease of use make up for it so far.

But enough of that. You’ve come here to learn about the game, right? 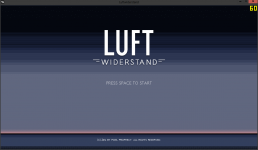 So I've uploaded my latest (very stable) alpha (0.0.10) for anybody interested to try. These are some of the features I did over this weekend:

What the future brings

I am like many one-person-indie-developers here: Constrained by a day job and a life outside games (well, let's better call it "20 minutes outside games"). This means I can only do sprints rather than endurance races on the game. So as soon as I got a couple of consecutive days off, I will get back to it and work on some features.

Right now I am still not sure what the "fun" element in my game should be. Is it the skill challenge of player vs. physics as in Lunar Lander and Asteroids? Or the hearty and rewarding cacophony of explosion effects going off thanks to big sprites and forgiving hitboxes, as in R-Type, Capcom’s U.N. Squadron or Luftrausers? Frankly, I’d like to have both.

If you are still reading, there's a hearty Thank You hug out for you. And if you have any questions or comments, feel free to add your two cents. I need all the change I can get ;)