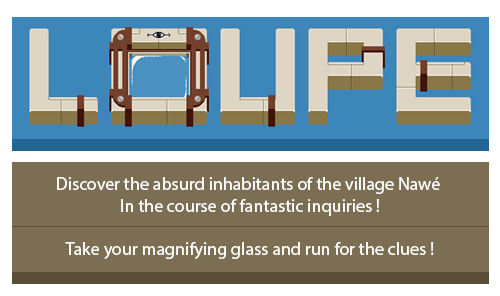 ALPHA VERSION :
Being in Alpha state, some features are still under development.

The next features will be :
- up to 25 (or more) cases of disappearance
- more interactions with NPC and objects
- more action on the track followed
- outfits of accessories to access all type of environment
- animations
- music & sound
- new menus

SUPPORT US AND YOU WILL GET ALL THE FEATURES COME TRUE ! 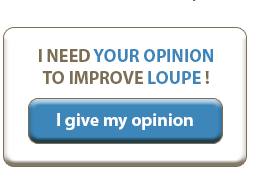 Since a long time, i want to out this 0.2 version !
I was working hard on it but some issues came to delay this version ... But don't worry, i have added a nice feature !

It's a feature that complete the gameplay experience adding some challenge !

You know that "Loupe" is a game about attention, observation and reaction. So the new gameplay respect that because it's principle is to put a dilemna to the player who will have to distinguish the right footprints found on a track from lures !
You will have to be fast to see what footprints correspond with your track and what are lures to don't follow !

For the others chnages, i corrected or chaged some tracks that's wasn't fun to play.

I also made water and rocks impassable to add more challenge to the map exploration.

It was a lot of work on balancing this version ! I'm happy to out this version now !
The game still lacks of music, sound and animations but for now, it's something i can't afford.
If the feedback about the game increase, i'll do my best to change this as soon as possible !

Yesterday the game entered in the alphafunding list of the game distributed by Desura and i was really happy ! Since Loupe is available for Desura's players...

Loupe, the Alpha is coming to Desura 29 May !

Loupe, the new kind of detective game is coming on Desura ! It's an awesome opportunity for the project ! Let's get the fun !

I just uploaded the new website for my project Loupe ! It's time to share the work done ! Hell yeah !

Hi everyone ! I am Repstyle and i amm one of the great developpers we can find in there Indie DB (thanks for this great community). I'm here because i...

Find here an alpha version of the game "Loupe" from the 02 May 2013. I encourage all of you to give feedback about your playing experiences. Thanks for...

I made a video about the demo: Youtu.be

In summary, I want to like it! I just feel that the comedy will not work until you get a proper translation for it.

Nevermind, after it said that there was no version available to download, I clicked on "More information", and clicked on "Play now", and the install worked.

I've done a forced update of Desura, and still, it says the game is unavailable.

I've done a quick gameplay/first impressions video for anyone who wants to see some gameplay! Youtube.com

Thank you so much for doing this video (i'm the creator of the game). As you guessed i'm a french guy and i don't master traduction. I will correct the mistake you found !

The game is still in alpha like you said and the music, sounds, animations and more enjoyable gameplay will come.

I really enjoyed your video !

Not rushing you guys, since I could download the Loupe_Alpha_130508.zip. But I post so you're aware that the Desura integrated Loupe's game is still unavailable.

Loupe's game is still unavailble for you ?
Desura staff guess your Desura app not updating as quickly as it should.

Desura says "There's no available releases for you to play". Wasn't it supposed to be available yesterday? (not talking about standalone versions).

Anyways, I can't wait to play the full version which I bought yesterday, because this games looks unique and very good.

Weird. The version is an alpha still in development but i think it should be available.i will send a mail to Desura to know what´s happening.
Thanks for our interest :).