(and please leave us feedback :)

Light Apprentice is an interactive comic book in which you influence the fate of the characters.It can also be described as a game that is also a comic book in which you level up and fight monsters while making the story as you go.
The game, in development since August 2011, started as a strategy RPG mixed with tabletop elements. The game has then been changed to accomodate the story mode, which integrates the comic books the game was based on in the first place.
Amazu Media is a small independent studio based in Viborg, Denmark. Comprised by a small team, we drink coffee and make the games we really want to see on the market.

Summary: It has taken such a long time... but CHAPTER 1 IS FINALLY OUT. In Beta version, at least, but you can totally play it!!

Hi everyone who's been watching our development process! First of all thank you for bearing with us for all this time. It has been a long, long journey until we got here, but I promise you it was well worth it -- at least from my part! I've learned so much and apparently will keep doing so. It's so exciting to reach such an important milestone and being able to share it with you! :)

I couldn't be happier with where our final product is going to. The team has worked hard and I'm proud to say we have successfully implemented the 'story mode' - which is another term for the framework we developed, which consists of an integration of the game itself with our own Amazu digital comic book reader (made in Unity). In practical terms, it means that when you are reading the comic, your actions and the story will be intrinsically connected.

That in turn means you will be able influence the characters' fate by making your own version of the comic as you go, and you'll often be making decisions that will affect the story in different degrees.I mean, how cool is that? Of course I'm completely biased because I'm the one making this (together with a very talented team, I must say!), but I couldn't think anything different, because as a comic book and video game nerd, to be able to even read/play something this was literally my dream, and it's coming true. And I sincerely hope you will like it too.

There are so many cool things planned and I'll be working hard to be delivering it to you in the near future, and I don't want to spoil anything. But I can say I'm planning around 7 chapters to complete the first volume of Light Apprentice, roughly one chapter per month.

And it all starts here: 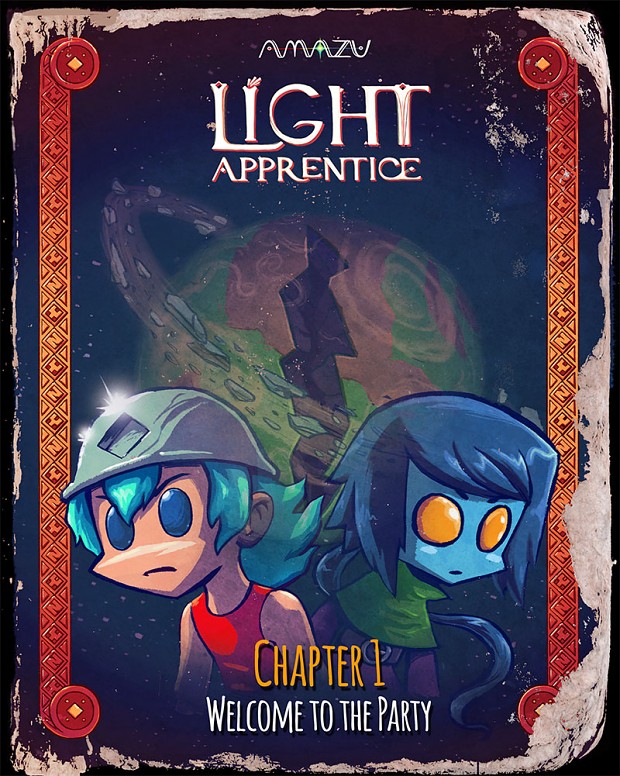 As I mentioned before, we have just put up a web demo of chapter 1 for you to play and send us some feedback. It is now more important than ever that you send us feedback, tell your friends about the game, and if you'd like to get more updates, like our page on Facebook, and follow us on Twitter and Tumblr.

Thank you again for the support and for believing in Light Apprentice.

- Igor
Happy to be a character is his own game

Light Apprentice is not dead!

After a long period of absence, I once again come back to tell you that the team hasn't stopped working since. And this time, we ARE launching!

You can now sign up the the Light Apprentice beta! We're finally reaching this milestone!

As we enter the last month of development before our softlaunch, we want to give you an insight of what is going on in the studio! Check it out and tell...

Scrutinizing details on how production is going on the game from now on, with our first milestone after we re-started production being reached soon ...

Story-wise, is this going to pick up right after the end of the comics?

Hi, I tried this game and this is a game which worth to buy it. But, you need to improve the game.

After I died, Tlob's(The magician one, I may forgot the name) health stayed in 0, and he didn't do anything after that.

But, it is still one of the best games I saw.

Thanks! At least one person (except for us) is happy :)

It is looking great guys! I voted and support you guys fully!

Thank you very much, Monsterbaby!!

Thanks a bunch! :D We're really looking to make this all it can be.