After months of filling out forms, mastering the arcane arts of building games for iOS and generally descending into madness, Knife That Guy is nearly ready to be submitted to the iOS App Store. Also, I am now operating under the name Flyover Games LLC, so that's cool. The final build (barring any bugs that have yet to be discovered) has been made but it could still use some more testing. If you're interested in helping out with the testing process and own an iPhone or iPad, just follow this link: Tflig.ht. Fear not, Android users! There's a build there for as well if you'd like to test out the new game mode and mechanics.

If you have already played Knife That Guy, this new version include a few new additions. There is a new "Sharpened" gameplay mode that smooths out the difficulty curve just a bit as well as several new enemies: Smart Guy, Shy Guy, and Tough Guy. 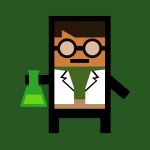 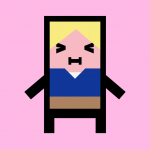 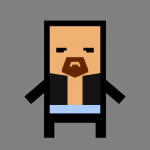 The iOS launch is so close, I can almost taste it. Or that may be a side effect of the lingering madness. Either way, now's your chance to assist Flyover Games in our mission to create a better tomorrow...where people can play Knife That Guy on a wider variety of personal electronics.

At long last, Knife That Guy has made its way to the Google Play Store.

Do you have an Android device? Would you like to test and provide feedback on early builds of Knife That Guy? Assuming your answer to both questions was...

This is the Windows installer for the version of Knife That Guy that I made during my Game a Month challenge. It is what I am going to be expanding upon...

Here is my Gameplay: Youtu.be
(PT-Brasil)