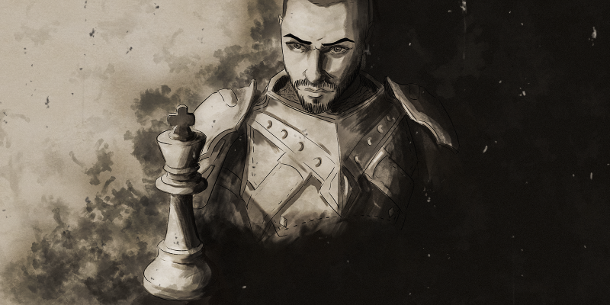 A chance to kill the King wouldn’t appear every day, but how can you kill the king? There are plenty of ways to do it, for example: poisoning, attack on the royal carriage, or setting his closest friends against him. But all these methods are for cowards! I don’t like when people call me Kingslayer. I don’t murder the Kings. I just end bad comedies and turn them into bloody dramas.

Kingslayer Tactics is a unique game set in the chambers of European castles at the turn of the sixteenth and seventeenth century. You play as the Kingslayer called "The Raven" - a medieval equivalent of a secret agent, who silences the world's powerful for a handful of gold coins on behalf of his mysterious Patrons.

In this interesting and mysterious medieval world you will learn the tactics, strategy and adventure of a person dedicated to his goal. Sneaking through castle corridors and fighting with hordes of royal guards is not the only thing you need to do. Planning your next step and upgrading your weapons is equally as important.

Thanks for voting and helping Kingslayer Tactics on it's quest to become the 2021 Indie of the Year. You are now in with a chance to score some free games. Help this game secure more votes by embedding the widget (or link) we have included below on your favorite sites.

To promote Kingslayer Tactics and grow its popularity (top games), use the embed code provided on your homepage, blog, forums and elsewhere you desire. Or try our widget.

Field of arms Tactics is a turn based strategy game with a unique board game aesthetic, set in the 18th century, recreating battles that occurred during...

Kagemusha (Development Title) is an indie stealth/team based/ strategy game in the vein of the Commandos/Desperados Series.

Imagine what we used to think of space exploration before we got to the moon. It was this frontier of unknown. Fleet Hackers is about exploration of the...

City of the Shroud

The story has only begun - the players will finish it. Your choices, and the choices of every player, will drive a living story and determine the fate...