Katyusha is a Platform/RPG, devoted to the popular character named in the original Russian song, written by Mikhail Isakovsky and composed by Matvei Blanter in 1938.

A character that has never been seen introduced before in a movie or video game, Katyusha was Russia's most popular song in World War II as it was encouraging soldiers between battles. The song describes a young girl named Katyusha. Who is Katyusha? Let's meet her.

Born and raised in Smolensk, hometown of the song's writer Mikhail Isakovsky, young Katyusha becomes an adult by facing humanity's worst fear: World War II. In 1940, standing by the Dnieper river, Katyusha says goodbye to her boyfriend who is leaving to join the Russian army. Her boyfriend fights in Russian battles during World War II. They exchange letters together but haven't seen each other for one year.

In 1941 Germany invades Russia. Katyusha lives near the borders. Her boyfriend advises her to leave and save her life. Katyusha leaves but her feelings won't let her abandon her boyfriend. She wants to find him. So she decides to leave on the east and join the Russian army. That would be her only hope of finding him back one day.

A Platform/RPG full of emotions
Katyusha is a fast-paced Platform/RPG which contains lots of emotional moments. Take control of Katyusha as she has to survive in Russia during World War II. The combat system includes melee combos and ranged weapons, among with stealth kills. Real World War II weapons will be used for this purpose.

A levelling system allows you to gain xp, level up and train Katyusha to learn new skills. Katyusha's skills include healing, movement skills and weapon skills. Checkpoints are symbolised by mailboxes as Katyusha sends letters to save her progress.

Both Katyusha and eagle can level up and unlock new skills to attack their enemies. Katyusha will also use vehicles (including the 3 famous Katyusha trucks which were used during the war), meet famous iconic people from World War 2, which either lived or died during the war. They will train her to reach her ultimate goal. Survive the war and meet her beloved.

Many of Katyusha's skills will be revealed in the future.

Real-life letters
When Katyusha's comrades are killed they drop letters. Katyusha will also find letters from German soldiers. All those letters are real-life experiences that soldiers wrote in paper and sent to their families during World War II. We also accept letters from any of you kept from your relatives. You send them via email to info@loresoft.gr and those will be posted, either with the original poster, or using alternate names. Photo of letters are required to prove the identification.

Stay tuned for more information. Full announcement of Katyusha will be done to the media in the following weeks.

Apple and pear trees were a-blooming,
Mist was creeping on the river.
Katyusha set out on the banks,
On the steep and lofty bank.

She was walking, singing a song
About a grey steppe eagle,
About her true love,
Whose letters she was keeping.

Oh you song! Little song of a maiden,
Head for the bright sun.
And reach for the soldier on the far-away border
Along with greetings from Katyusha.

Let him remember an ordinary girl,
And hear how she sings,
Let him preserve the Motherland,
Same as Katyusha preserves their love.

This is our first update for 2018, as we have completed most of the user interface for Katyusha.

As you can see, the UI will include a health bars for Katyusha and her eagle, as well as xp bars.

Both Katyusha and her eagle will gain xp and level up. You will be able to spend attribute points upon Katyusha's level up, as well as unlock new skills (currently under construction). Her eagle will be also able to level up and gain new skills which are going to be revealed later on.

The inventory is not final, as some stuff are still placeholders. The game will include a Favorites horizontal bar (currently not implemented in this version) where you will be able to quickly access your weapons and healing supplies. Katyusha will also be able to craft stuff. The first craftable resource in this prototype version is the healing gauge. Katyusha grabs cotton from trees and two cotton pads can form one healing gauge, which heals more than...apples and pears. 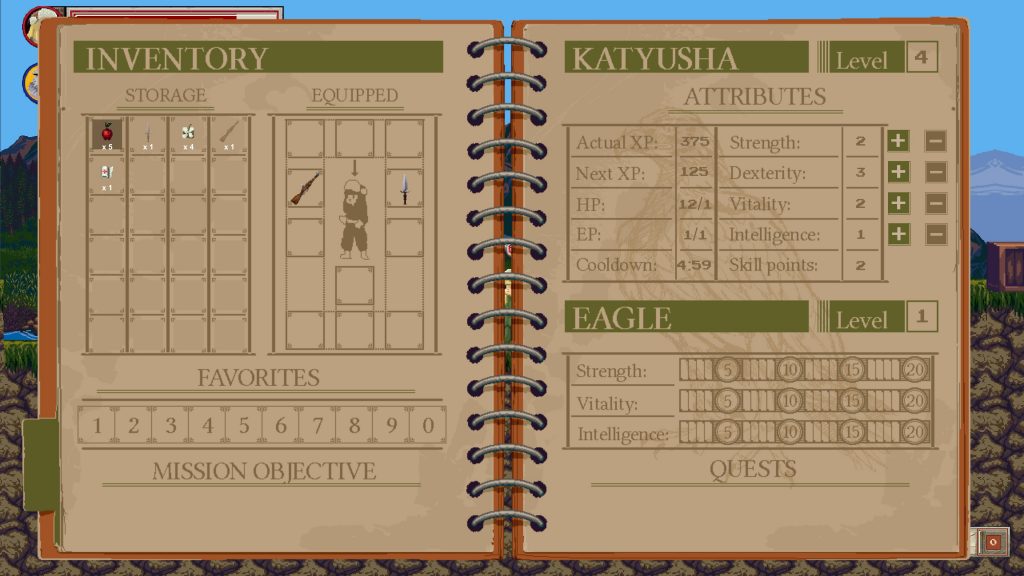 The user interface also contains info about the main mission objective and quests. You can also see the cooldown timer on which the eagle will return so that you can use him again.

Stay tuned for more info and thank you for your support.

Follow her and add her to your Wishlist to get notified!

Light announcement for the upcoming Platform/RPG, based in the Russian song/character.

This is the expanded demo of Katyusha (December 2018, v.0218) which contains several new RPG elements.

A glimpse of the basic gameplay mechanics and A.I.

The Valley of Super Flowers Platformer

Lambs on the Road Platformer