A single-player 2.5D Lovecraftian submarine game, where you have to manage your resources and crew, your submarine and bases to survive mysterious dangers lurking in the deeps. Explore the unknown, dive deep into the story and find secrets that alien ocean has to hide.

Into the Deep Devlog #3 – Bases, visual upgrades and UI

It’s been a long time since the last update, but that doesn’t mean I have nothing to show you! Since I now moved to another country, and things that didn’t let me develop are out of the way, I can start dedicating more time for Into the Deep!

The game has been progressing bit by bit. Not as much as I wanted, but I am really happy where it currently is and what I see in the future. I prepared you few sneak peeks from the recent development. Hope it piques your interest.

Submarines are nice, but there should be a spot to keep them all… what about treasures you uncover, you need a place that you can call home. If you are a hoarder like me you will probably want a place to keep your artifacts.

All the models are placeholders, but I really like the looks of it, and I believe artistically this is the looks I will choose.

So bases will be an integral part of the game, as I mentioned before, to store various items you uncover during gameplay, your submarines and of course something to defend, because that is FUN.

Bases like submarines run on power, oxygen, and can also be flooded, so they require some upkeep. Currently, I am working on systems to make bases customizable, so you can build more rooms, add new upgrades and etc. Imagine Fallout Shelter type of customization but for underwater bases, that’s what I am trying to achieve in the end.

Last time I posted it was mostly cubes running around. To test the feel of the game I cheated a bit and bought myself some models to play with. I really like them, and low-poly style will fit the game really well I think.

I also started building shaders for various parts of the game. You already saw the base transition, it’s all shader magic! There are more to show off, for example, a mix of postprocessing and emission shaders with some dirt create awesome looking rock deposits.

This will be one of the collectible resources in the game for your drone army to collect… or you could do it yourself if you’re a fan of manual labor.

UI is something that I currently struggle with, I am no UI expert. I started by creating a general structure of the UI and its functionality. Not reinventing the bike here, the structure is very similar to any strategy game. Here’s a block out of what’s visible on the screen during gameplay. 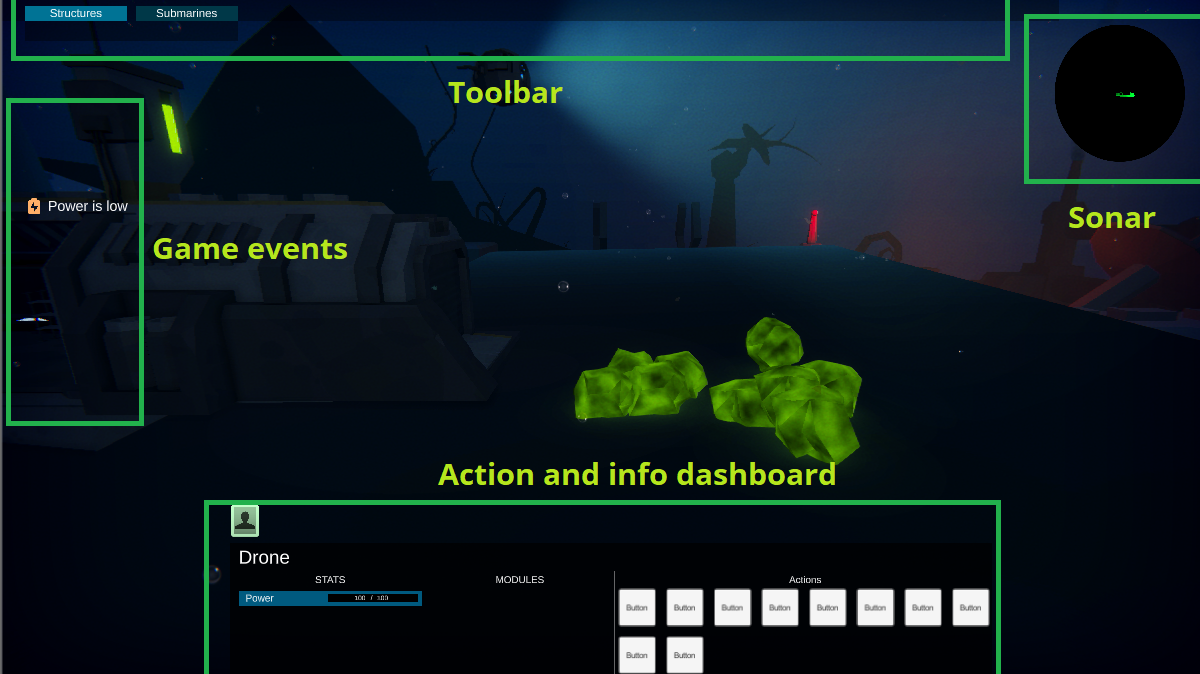 Visuals will be simplistic, and hopefully not obstructing

In the end, I am hoping to achieve a clean look, nothing too fancy, but functional and neat.

All in all, progress I made during the past few months is something I am proud of. But there is still a lot to do to reach a fun and playable prototype because it’s a very system based game. So Into the Deep development continues at a steady pace, it takes a bit to write these blog posts and as much as I like sharing progress, I don’t promise to do them very often. Thanks for following me!

You can reach and support me on:

Welcome, Captains of The Deep Sea!

Into The Deep Devlog #2 - Transitions, explosions and more!

Into The Deep Devlog #1 - interactions, status effects and other systems

My latest progress on interactions with objects, movement through the ship, and some other details.

Very interesting project. I'm excited how it will go on :-)

Thank you very much, I am excited too! :)

Thanks, I hope I can match your expectations

Indie
Twitter
Tags
Embed Buttons
Link to Into The Deep by selecting a button and using the embed code provided more...