Louisiana (USA), 1825 - Thousands of African people are deported to work in precious coffee, tobacco and cotton plantations. Amongst them is Joshua, an 11 year old boy who was born aboard the "Guerreiro do Mar", a galleon of Portuguese slave drivers. Trafficked and bought when he was just an infant, Joshua works daily in the fields that belong to the Gallaway household, south-west of the city of New Orleans. Just like any child his age, he is full of dreams, but his destiny was determined on the day he was born enslaved. Joshua will need to find the strength to fight against one of the greatest injustices of humanity. The story is filled with twists and turns, however the plot of the story will depend entirely on you and your decisions of the selections that you will have to make.

Features of the game:

- "The United States of America from the 19th Century", is portrayed in evocative graphics which is displayed in pixel art.
- An original story with an engaging and addictive narrated adventure, which is composed of 3 chapters. Experience the opportunity to fight for your freedom and that of your people.
- There are dozens of characters to communicate with; will you manage to figure out who really wants help? Remember that trusting the wrong person may be fatal.
- There are many cut scenes where you will really have to engage at a rapid rate. Timing is everything, and quite often you will need to make some truly tough decisions.
- English is the capital language spoken throughout the game; however subtitles are available in different languages.

I'm Joshua is an adventure game, point and click, for PC. It will be released in three chapters.

Check out the #4 devlog! We talk about Joshua, items, fonts, characters and more. 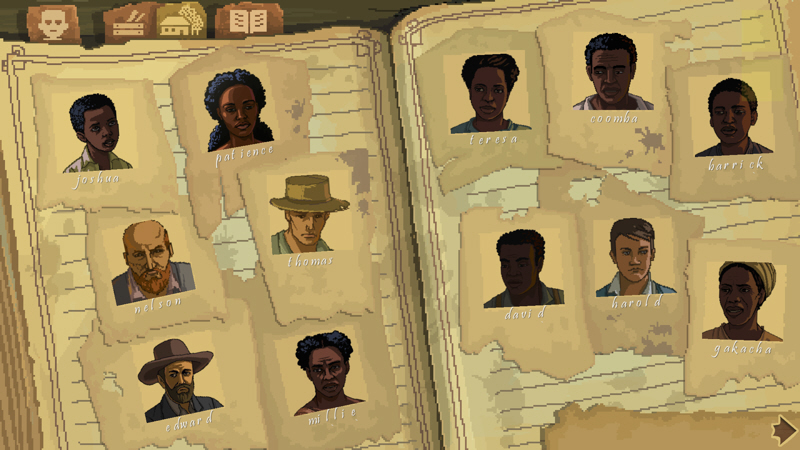 Check out the #3 devlog! We talk about the quick time events and items.

Check out the new episode of the I'm Joshua devlog!

The devlog is live!

We announce the release of the devlog of I'm Joshua!

We announce a new video

We have released a new video: Joshua writes the diary.

This game looks amazing, and I am extremely excited for it. However, it saddens me to see that the English is not great and may sink a very promising title. I would hate for such an important message and story to get lost in translation.

Please let me know if I can help you make the English in your game smoother and more natural. I will work for free.

Thanks for your feedback!
Exactly which are the texts where you found errors?
The game plot has been written by a English native writer, with the exception of the texts of the game introduction (done by a writer with fluent English skills).
So we don't expect troubles in this game feature... we hope :)

Great concept. Correct me if I'm wrong though, but wasn't importing slaves into the US prohibited by Congress in 1807?

You have right and our answer was about the slavery abolition, not the importing prohibition.
But that amendment wasn't been fully executed.

From Wikipedia: The 1807 Act ended the legality of all international slave trade with the U.S. However, it was not always well enforced and slaves continued to be imported in limited numbers.

Thanks!
No, the amendment for the slavery abolition has been approved in U.S. in 1865

We have released the teaser video of I'm Joshua!

Graphics style looks nice in the pics.
It captures the historical setting ,I'd say.

thanks for following!
We're in the early stage of development, so is difficult at the moment plan the release date of the First chapter.