You're a hacker with full freedom to act as you want on a vast network of computers procedurally created.

The interface of the game is similar to a current desktop operating system. The file explorer, the command terminal or text editor are some of the programs that will be available from the start of the game. As you improve your skills you will encounter new utilities may install and use.

In Grey Hack, terminal has a fundamental role, it is also based on actual unix commands and will be an indispensable tool to perform successfully hacking actions.

The following features are not yet included in the game. During the development in Early Access will be completed, expanded and improved based on feedback from the community.

One of the main objectives of the development is that each player action influence the world and therefore the other players.

For example, you will be able to act on your own benefit, even if you cause collateral damage, help the authorities stop criminals or simply keep a low profile and take advantage of the actions of other players.

In future versions of the game, you will have the possibility to join a group of hackers to carry out coordinated attacks or even create your own group in which you will be able to recruit other players.

Currently each computer in the network is used by at least one user. Each user lives consistently in the world; go to work, shop online, etc.
In future versions of the game you will be able to directly or indirectly influence the lives of these people depending on what you do.

This concept of action-reaction is going to be expanded and completed throughout the development in Early Access. 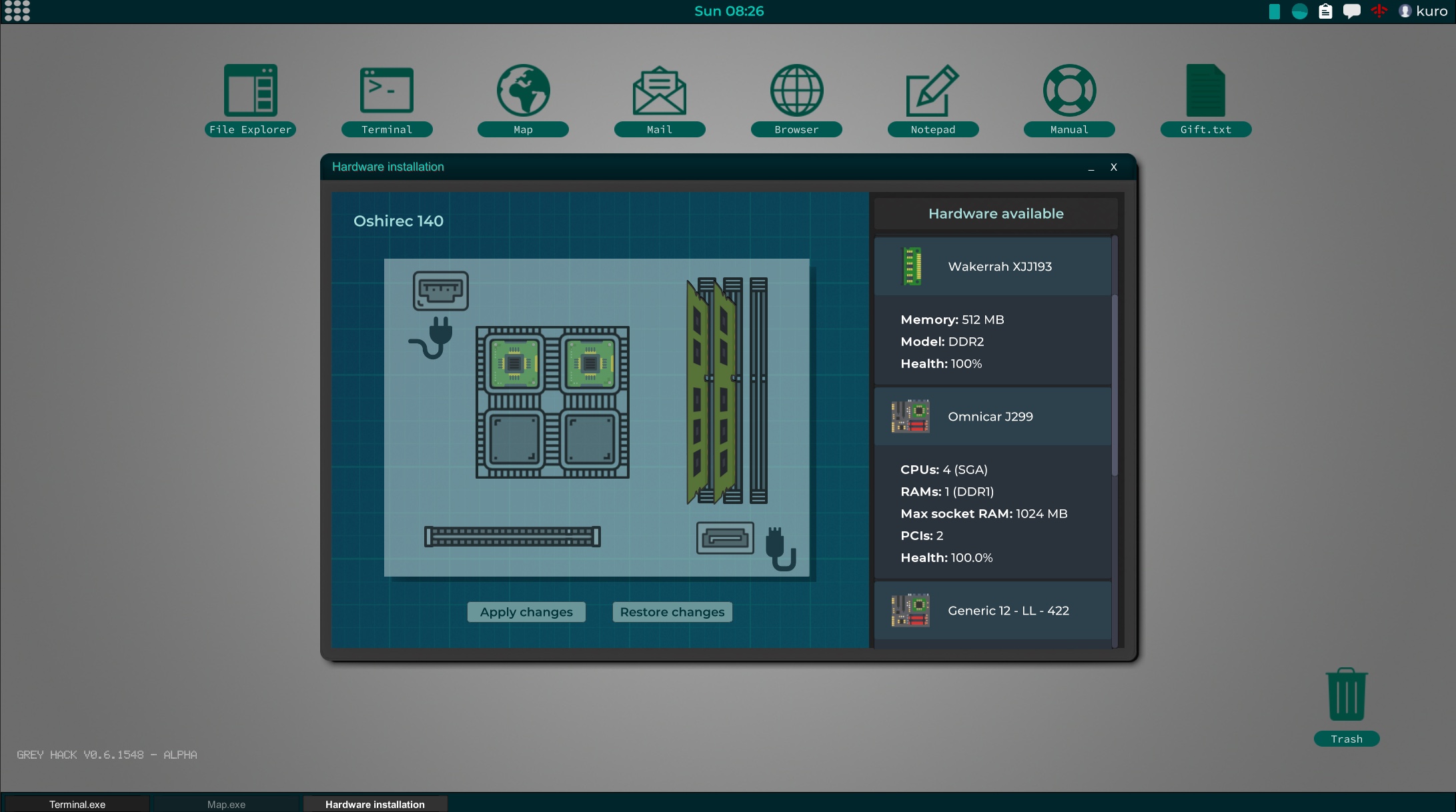 The hardware is ready!

From now on, certain processes that consume CPU resources will finish their work faster depending on the speed of the processor.

If several processes that actively consume the CPU are launched, such as several deciphers in different terminals, the resources of the CPU are shared between the processes, therefore they will finish their work more slowly.

For the moment it only applies to the decipher command, but very soon there will be more tools that will make use of the cpu. 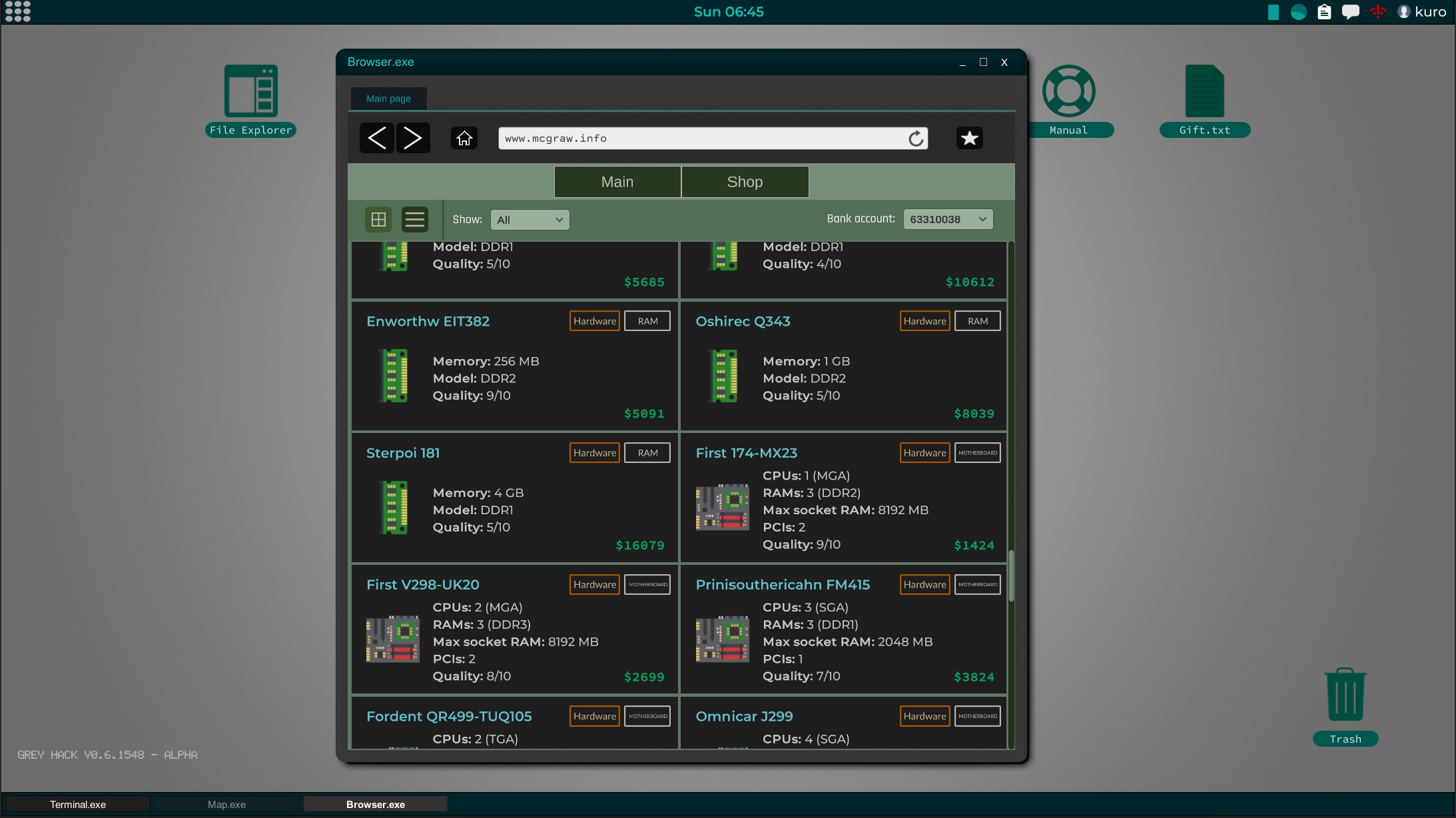 In the same way, hard drives also share their resources between simultaneous copies that are being made on the same computer, so the speed of copying will be lower the more copies are being made.

In future versions of the game, when the ISPs are implemented, the download speed will also be shared among the simultaneous downloads that are being made.

A widget for RAM and the CPU has been included.
You may notice that memory and resources can sometimes seem somewhat "static". This is because the process system is not yet finished, but it will improve with the updates.

The Power supply is important for the system to be stable. A power supply with low power or damaged can cause errors in the copies and crashes in processes as well as damaging the rest of the components of the computer if it is not replaced in time.

If a system is too unstable it can lead to Kernel Panics or spontaneous reboots. 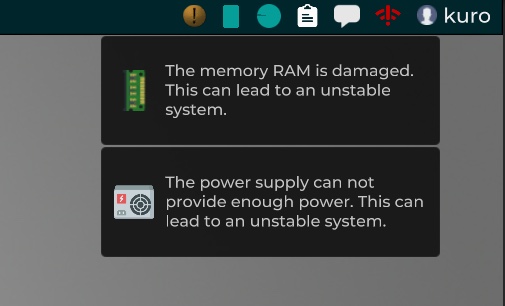 A high-power processor, a RAM or a quality motherboard consume many more resources than worse versions. Therefore if you change the motherboard or add components that consume many resources it is a good idea to replace the Power Supply with a higher power.

The motherboards have PCIs slots that in this build are not used but in next updates will be introduced the network cards that will have to be installed in these slots, besides other peripherals.

At the moment the graphics card is postponed until new mechanics such as bitcoin mining are introduced as it could now be redundant with the CPUs. The fans are also postponed until the process system of the computer is finished.

Here you have the full changelog. There will be news very soon as the development of version 0.7 will begin!

Thanks for your help and feedback!

As I forgot to update the changelogs of the updates here, I put a link to the last two recent and important updates that the game has had. Regards!

Hi! Since there are many changes regarding the nightly branch and the latest versions are quite stable, it has been moved to the public version. At the...

Some additions like reputation system and missions created by players.

Greetings.
I just saw your game, and got interesed.
May I can ask you about the price,and other things?
I hope you will contact me as soon as possible:
scpfoundationhire@@[gmail.com](members:gmailcom:1498337)

how do i get to it to play? New here

Hi! The game will leave the status of closed alpha and will be available in steam next week as early access.

I just saw your game on Greenlight, it looks so intriguing! Do you have an email address I can reach out to you on?

I will create a specific email account for the game and profiles on various social networks soon, I will notify you when they are ready. Thanks for your interest!