Grave Prosperity: Redux follows Amber Ridge as she finds herself broken down on a mountain road. Without any reception and no signs of passer-byers, she is forced to walk to the nearest town- Prosperity. A place that knows no God and exists only to make you suffer. Utilize a deadly arsenal of agility, blade-work and gun-play to fend off the darkness that stalks your every movement. Collect EXP through solving puzzles and slaying grotesque creatures in order to upgrade your stats to better suit you survival needs. 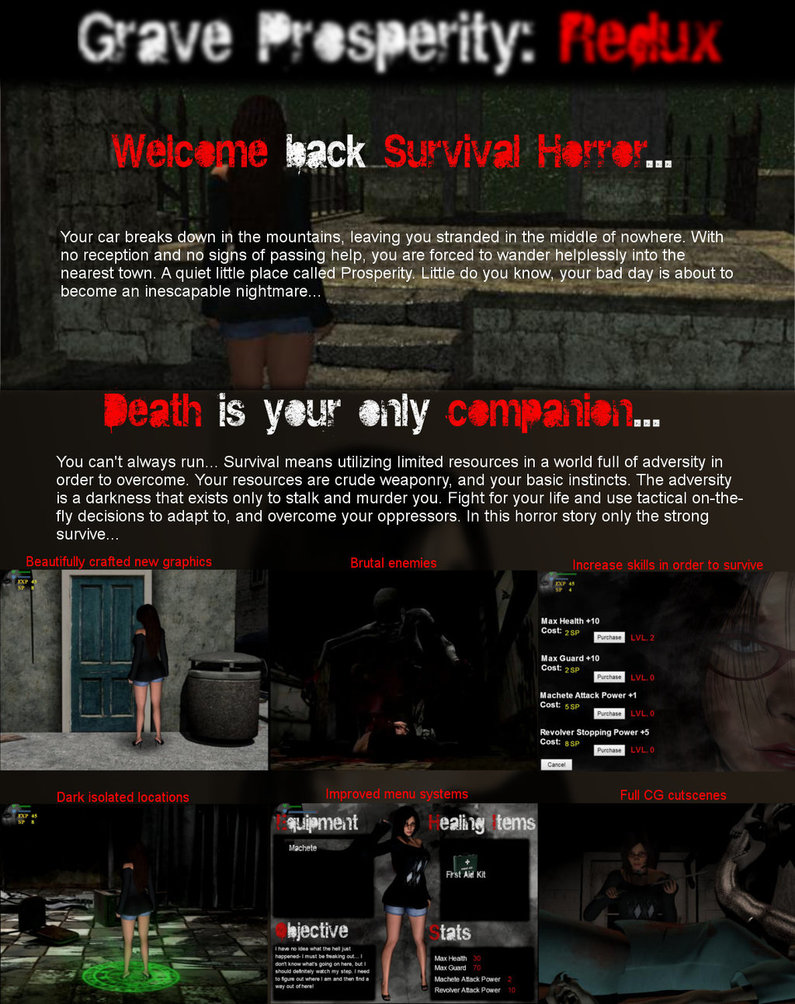 More On "The Patch"

Hey there everyone! I got a bit of a long winded message and some final screenshots to preface the release of the first official gameplay footage for the patch that's been in the works. It's been a long time coming, but I am very proud of how everything is turning out! Everything from visuals to sound design and controls have all been vastly improved over the original installment of Redux.

So, to start, you'll notice yet another change in Amber's model. Funny story, actually. Basically once word got around that Miki was being removed from the story line there was a bit of an uproar in my inbox. I never realized just how much people liked her character... Until I got a nice pile of emails that made it nice and clear! Some were more colorful than others, but it was actually very endearing to find how passionate the fans of the game are. Now I still don't get the draw to her character, as she never had enough screen time to develop a good solid personality. Not even back in the RPG Maker XP days. But whatever it is about her, people like it. So since I didn't have much personality to draw from, I decided to just give her image to Amber. Amber is still Amber, she just looks like Miki now. It seemed like a pretty good idea at the time and I hope it makes everybody happy! So here's lookin at you, crazy fans! Haha

Aaaanybut, the video will be released by the end of the month. What can be expected is a more exploration and story driven game, rather than such a combat driven game. There will still be combat, but not the rage-inducing difficult kind of the former Redux. Gameplay draws a lot of inspiration from titles like The Witches House and The Evil Within. Both amazing games from two very different sides of the industry (Indie and AAA).

Also, the setup is changed now as well. I initially wanted to do the classic 1990's RE style menu system, but unfortunately it proved to be a bit beyond my skills up to this point. Once I got more than 1 item in the menu things got a bit... Off. That's ok though. I have a much more suitable HUD and menu system running now. The HUD looks very much like The Evil Within's, and the item selection menu is all real-time, similar in looks to the way The Last of Us did it. It's all been tested and it works perfectly, so no worries in losing out on this one.

Wellp, with all that said, there are now screenshots from the coming video posted here!

This patch has been in the works for a few months now. Things got in the way, but now it's back on track again!

Time To Kill is a DLC reminiscent of RE3's Operation Mad Jackal. Unlock different stages and a greater arsenal with points earned in a challenging speed...

The combat system in GP has always been a bit clunky, even with this latest engine. Each iteration of the title brings better mechanics, but now I have...

There hasn't been so much focus on posting too much content lately because Part 1 is coming to the final phases of its development. Until it is complete...

Who did the graphics for your game?

The actual 3d models are bought from vendors at Renderosity and Daz3d. Everything else is done by me though.

Another patch has been made for GP: Redux part 1! Here is the list of additions/ changes!

*Fixed Sound bug in Hotel
*Added Navigation Button (LT or SHIFT)
*Added environmental effects (Flies, roaches)
*Added ability to turn around while blocking
*Changed blood effects (Tweaked imagery, blood now remains on floor for longer)
*Reduced final boss's HP by half (The fight was too drawn out and made for a tedious experience)

After seeing what gamers had to say after playing Grave Prosperity: Redux I have come out with a patch that should address the main issues!

Thank you all for your feedback! It is always welcome and can go a long ways toward bettering this project!

Grave Prosperity: Redux part 1 is now available on Steam!! Wow, it's been a long time coming, but it is finally up! Now back to the grind stone on Part 2!

CHECK IT OUT!!
Great news, everybody! Grave Prosperity: Redux has been given the opportunity to go to E3! For all of you out there following this game, please show your support by nominating this game here:
Indiescrashe3.com

Hey there, I found this game to be a wonderful experience. I particularly loved the graphics and voice acting, they made me nostalgic for the PS1/PS2 CGI graphic days. The combat system was easy to pick up, but I found the first monsters that you encounter to be rather tough to beat. However, I did feel prepared to beat the final boss with no problems! Overall, I had a very satisfying experience, and I can't wait to play the next episode.

I will be uploading a chronicle of my gameplay and reactions over the next few days if you are interested, here is the first video: Youtube.com

Thank you for this release and all the best!

And thank you for your time and videos! I absolutely loved the first episode and cannot wait to see you tackle the rest! Updates on Part 2 will be coming very soon!

Just bought it, i'll let you know my impressions when it will be ready to download :D

Awesome! Feel free to email me with any questions you may have! Also, a Let's Player on Youtube named Fiarlia just started playing the full version as well. Check out his channel if you get stuck!

Of course! At the moment my order is still pending, i can't wait to try this game ;)

Ok your download should be ready and waiting for you!

Thank you, i got it and i just finished it. Very nice story and atmosphere (music and dialogues are great!). The game is a bit hard at the beginning but it becomes easier once you get the hang of it :)
Just a little problem but it's nothing serious: if you die to the first monster and you come back in game at the checkpoint, the monster starts attacking you before you have the chance to parry or dodge!
Overall a very good remake of the old game, i'm looking forward to play part 2 and i hope this game gets greenlit!

Thank you for your compliments! Here's hoping for getting greenlit. Updates for Part 2 will be on their way soon!

Ah, gotcha. Yeah I just set up my paypal account so they said it will take up to 2 days for them to authenticate my account and attach my bank info. Never really used Paypal in the past.