Fragments of Him: DLC Reveal

While the release of Fragments of Him is going to take a bit longer, we have been giving Downloadable Content (DLC) some of the thought and attention that it deserves. Let us take you through all the versions and DLC that you might be able to obtain now or eventually for Fragments of Him. 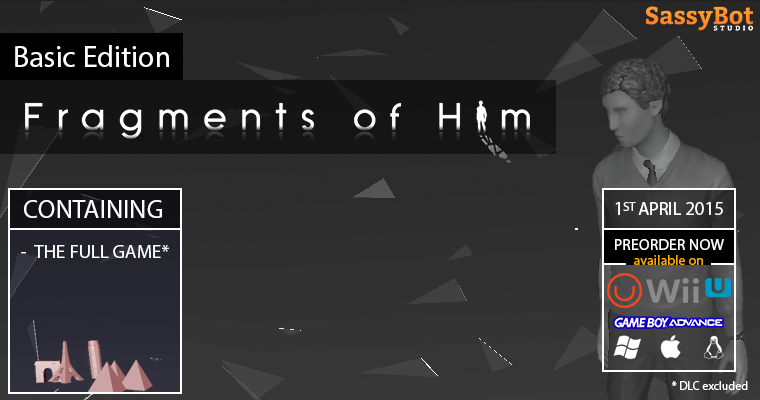 This contains the full game* as we intended it, completely playable in all of its glory. 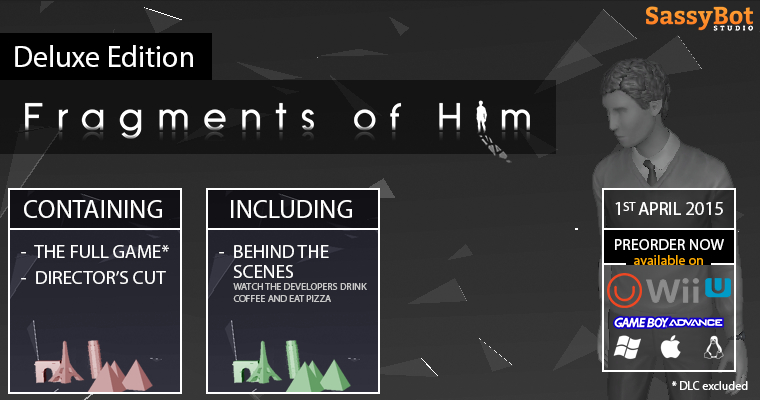 For those that want/need more, we bring you the Deluxe Edition. In addition to the full game*, you get the Director’s Cut. This version is exactly as our narrative designer intended the game to be, which is the same as the regular version albeit with a different title screen leading into the game.

In the Deluxe edition you can also expect a ‘Behind the Scenes’ video. This 4 hour documentary shows the developers eating greasy pizza, drinking mildly enjoyable (but potent) coffee, shooting NERF guns and weak attempts at rhetoric on whose weekend was more eventful. 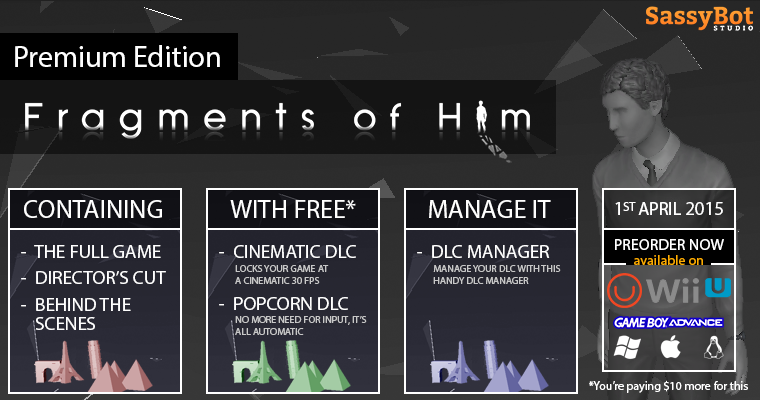 The Premium Edition contains everything the Deluxe Edition has, and more. The Premium Edition adds the Cinematic DLC. We know that some users desire a truly cinematic experience while playing Fragments of Him. We also realise that 60 FPS (frames per second) makes it a lot less cinematic (which is why most films are shot at 24 FPS). This is exactly why the Cinematic DLC will lock your frame rate to a maximum of 30 FPS, for the best experience you could ever want.

To add to the ultimate cinematic experience possible, we also introduce the Popcorn DLC where all the camera angles have been carefully picked for the most optimal narrative delivery possible without having to play the game whatsoever. All you need to do now is press the play button.

We also recognized that by giving you so many options to expand your Fragments of Him experience with all this DLC, that you need a way to manage it all. To meet you mid-way we also include the DLC Manager. The DLC Manager gives you an additional option in the menu to see what DLC you have enabled, which you are missing, and what discounts or sales are currently ongoing. Obviously perfect for those who want to stay on top of all the options in DLC. You can find this option in the in-game menu. 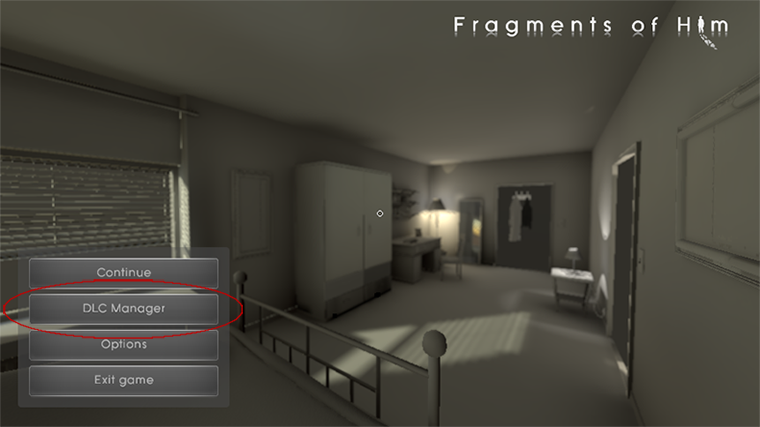 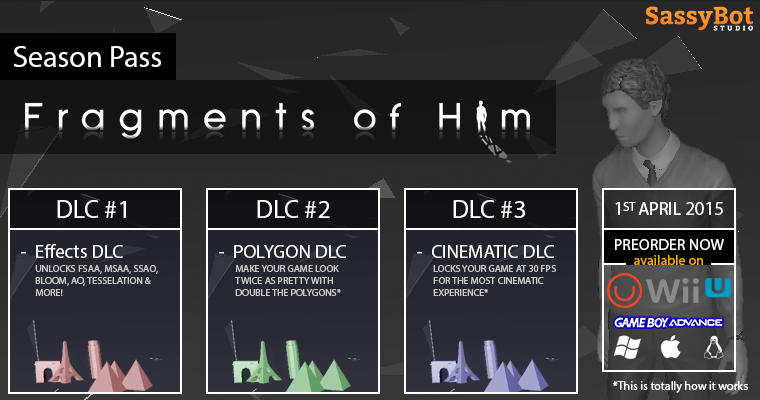 We know that you love DLC, and if you don’t, we hope that our DLC will convince you. If you really want to show support for your developer you can buy the DLC Season Pass ahead of time. All DLC will be available to you on release meaning that you don’t have to wait to enjoy the full game! The Season Pass contains 2 content packages that we haven’t discussed before.

The Effects DLC allows you to play around with the settings of the game, for those who want to use the full power of their computers. We recognize that not everybody feels comfortable using these settings, so we decided to put this in a separate package. Once enabled, you can use FSAA, MSAA, SSAO, Bloom, AO, Tesselation & more! The perfect DLC for the true PC gamer. A cheat sheet to all these acronyms will be included with this DLC.

The Polygon DLC is for those that deeply care about graphics. As most of you know well, pushing more polygons on screen will obviously make any game a lot better. With the Polygon DLC you will benefit from double the polygons, giving you twice as much enjoyment out of the same game. 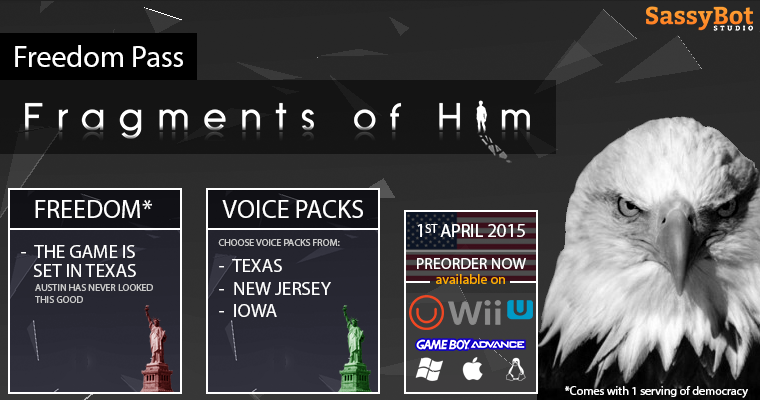 Finding the compassion and empathy to characters in a game can be difficult, as such we decided to allow the players to let the players change the location of the game to Texas instead of England. The pass revamps all of the levels to look like Austin. This pass will also give you multiple options for the voice overs in the game. If your state is not available you can send us a request to freedom{at}sassybot.com, and we will make sure to look at your specific request.

Our final announcement involves hats. Research has shown that everyone loves hats in their games. This is why we will be opening up a hat shop on release, allowing you to customize all the characters in the game to your liking. Hats can be found in the game as well as bought in the store. 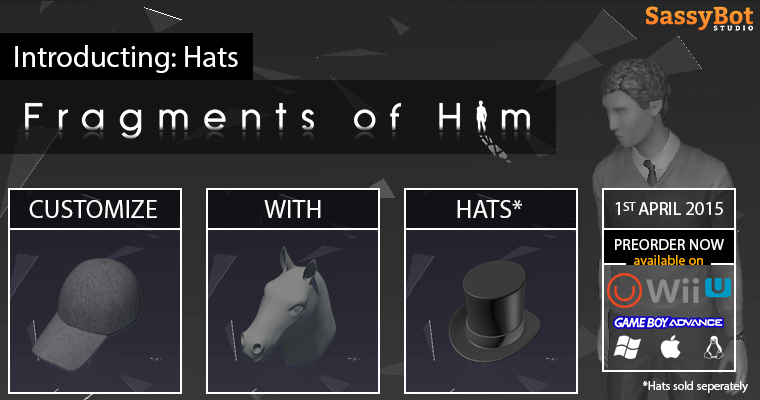 We also know that you have that one question: Can hats be stacked?

Yes. Yes they can. 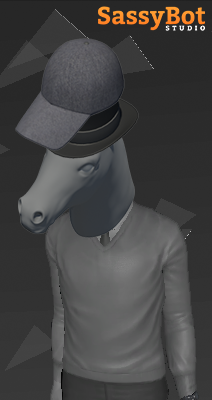 That was it for the announcement, if you have any questions please send a tweet to @sassybotstudio
* The full game does not contain any DLC.

Fragments of Him - Creating The Interactions

This article will cover the interaction tool that we use to build Fragments of Him. This tool has seen several iterations before arriving at its current...

The Fragments of Him Interface

With the release of Unity 4.6 and its new UI system, we thought it was time to go into more detail on how we designed and built the interface of Fragments...

Fragments of Him - Gameplay & Interactions

Let’s talk about how the interactions within Fragments of Him will work, I will be going over a couple of the mechanics that you’ll be seeing throughout...

Fragments of Him - New Shaders!

It's been over 3 weeks since our last blog, and a lot of things have happened since then. One of those things are new shaders.

GAU Studios Preview of Fragments of Him Youtu.be

another artsy "game". can pretension overload be avoided? good luck.

I guess I'm not in the position to argue you on that, so I'll let you make up your own decision on that. I can however suggest that you play our Ludum Dare 26 prototype to see what you think of it yourself: Bit.ly

I'd be lying if I told you that that wasn't the first thing I thought too. (The 'another artsy "game" part that is.)

I watched the teaser and it didn't really help since I still don't know what this is supposed to be.
Making an actual gameplay trailer would be the best thing to do, if you'd ask me.
And if your gameplay is weak, you'll need some really good writing to make up for it (see: Dear Esther). Still, not everyone will like it then since some people don't care about the story all that much.

Good luck with your project.
Putting this on my watchlist just to see if something interesting comes out of this.

We're not ready to show a gameplay trailer just yet, we do however have an (old) prototype that shows that we have a very strong story. The gameplay in that prototype however isn't exactly great (which is why we're drastically changing that for the full game). I strongly recommend you check that out if you're interested.

Indie
Tags
Embed Buttons
Link to Fragments of Him by selecting a button and using the embed code provided more...