On June 6 2028, the United Coalition Force invaded the sovereign state of Kardastan. After a brutal three year war, the UCF succeeded in hunting down and assassinating the Kardastani dictator Haddar Sharif. The war sparked civil unrest and led to the rise of the Revolutionary Freedom Army, an insurgent faction who wishes to avenge Haddar Sharif. The RFA relies heavily on guerilla warfare, improvised weaponry, sabotage and hit-and-run tactics.

You'll be in charge of a well equipped UCF artillery regiment. Your task will be to strategically build and maintain a variety of Turret Structures ranging from high velocity Smoothbore Cannons to Howitzers firing 155mm air burst shells. You'll be able to use Hesco Walls to provide perimiter protection, and install upgrades on your Turrets to increase your range and firepower.

Use Target Prioritization modes to prioritize certain targets over others. If you're encountering heavily armored targets like Armored Cars, you might want your Turrets to engage those targets first.

While we’re doing everything we can to ensure a steady framerate on any system, we do recommend having at least a mid-range CPU and a mid-range GPU. Some of our levels feature large amounts of units onscreen which may cause some dips in performance. Playing Forward Defense on entry level graphics cards may result in suboptimal framerates, especially on screen resolutions above 1920 x 1080.

We're aiming to create a highly polished and detailed tower defense game with familiar gameplay and a modern military visual style. Forward Defense will be launching in Early Access first, so you'll be able to play the game very early on. We're very open to community feedback and want to slowly expand the game with new features, while keeping a close eye on performance. If you have any ideas or concerns, we would love to hear from you!

We're excited to announce Forward Defense will be launching on Steam in Early Access on June 1. Early adopters will be receiving a 20% discount during the first week after launch. Initially, the game will feature a limited amount of levels, and more maps will be added after the release.

You'll be able to use six different turret structures and hesco walls to try and defeat Revolutionary Freedom Army forces. This insurgent faction uses a variety of vehicles ranging from machine gun technicals to armored cars. Once the game is on Steam you can leave a review, but you can also send in feedback or ideas at our social media pages. 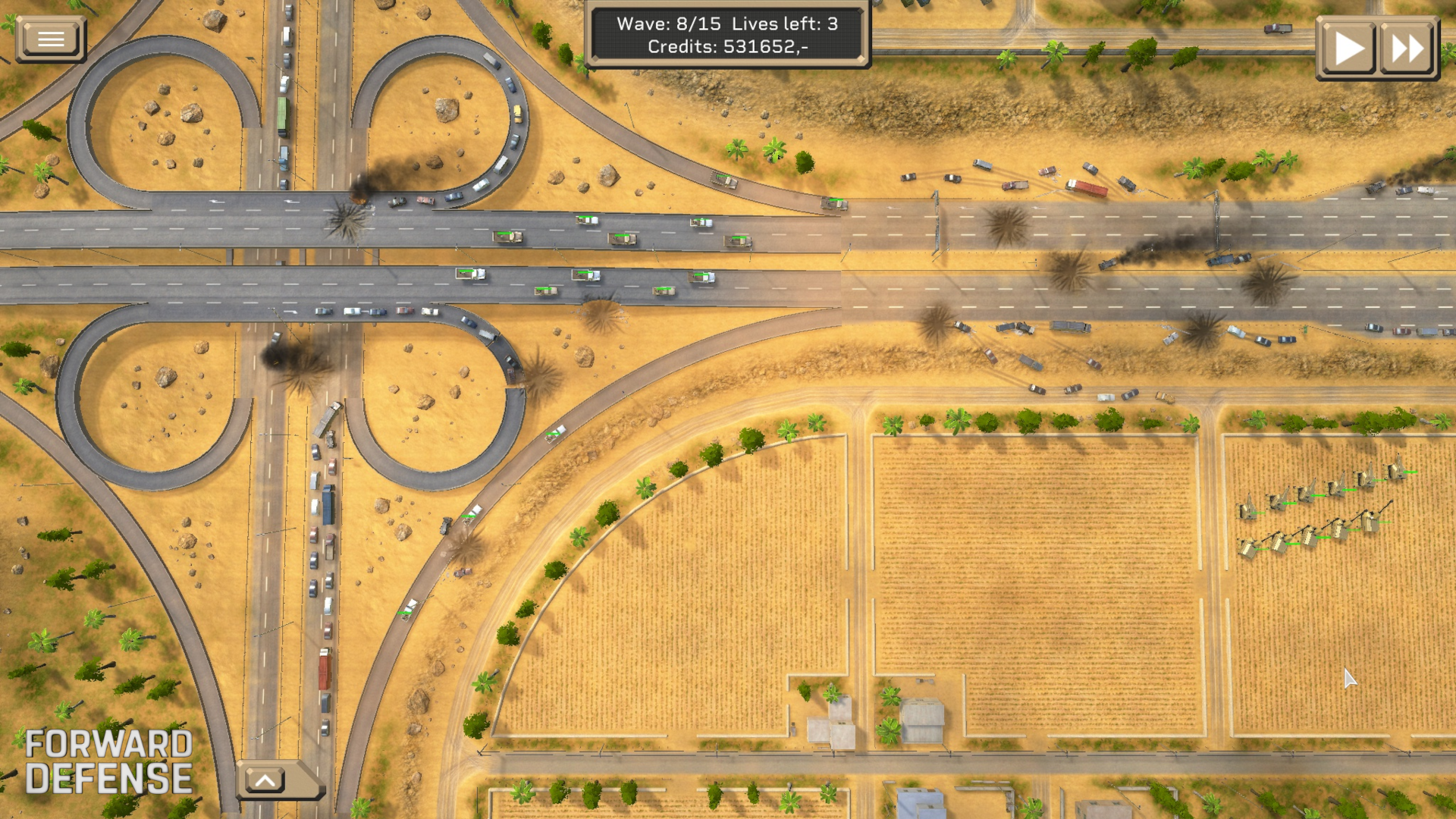 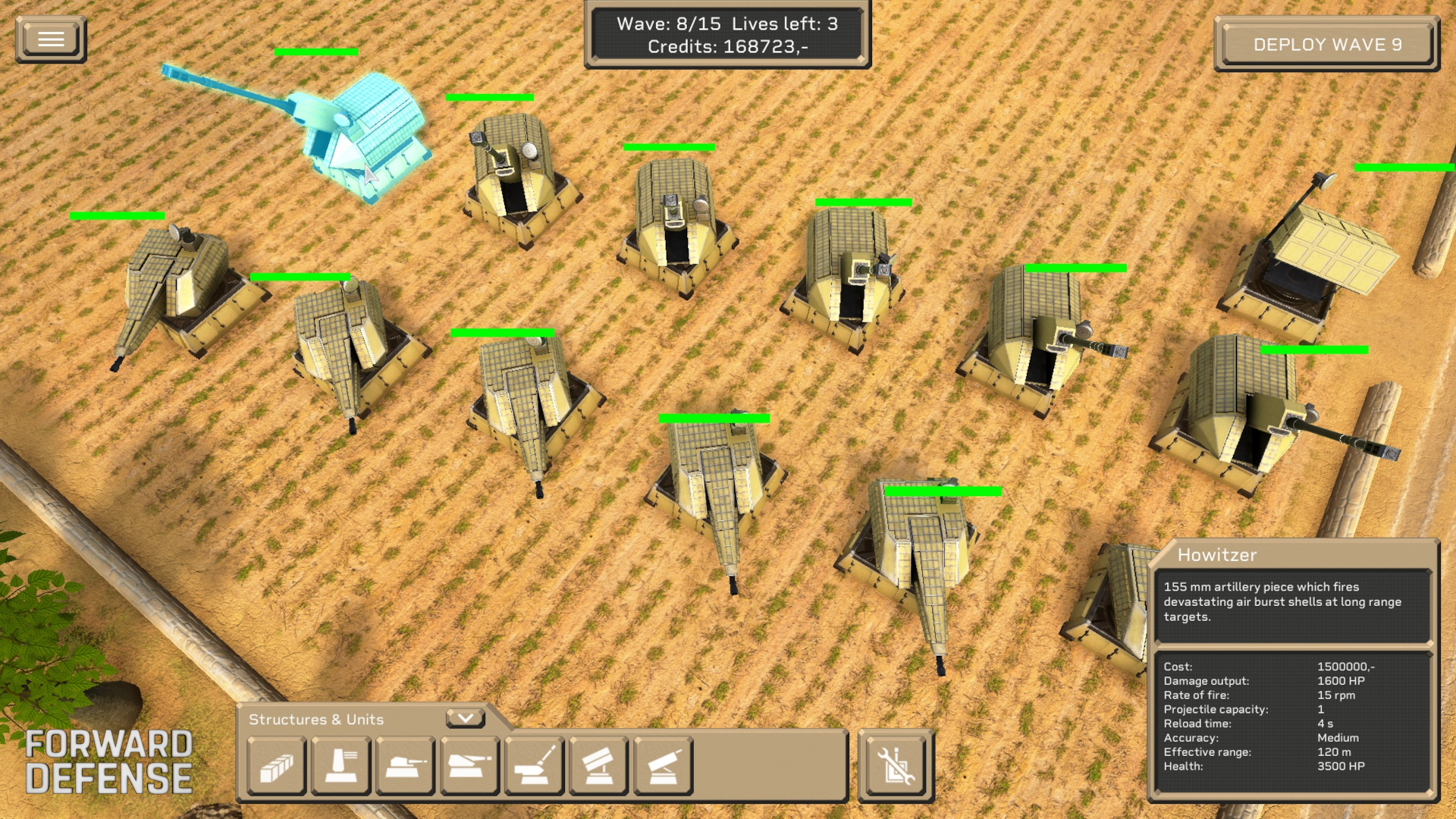 Please refer to this article for the system requirements: Indiedb.com

Today we're very happy to announce a public demo is available. The demo is free to play and you'll be able to battle through two of our levels: Lost Outpost...

Today we're sharing the system requirements for Forward Defense. While the game isn't the most demanding in terms of computer hardware, you'll still want...

This demo is an alpha version of the game and contains two of our levels: Lost Outpost and Apocalypse. The Lost Outpost map revolves around a combat outpost...

Towers of the Apocalypse Tower Defense