Fortis Rex: Rise of the King

Farmers and their animals will be an integral part of the economy of the world of Rex. So far this includes cows, pigs, goats, sheep, donkeys and horses (though horses are also found in the wild, as we shall see). Those will be raised and herded by peasants in order to obtain various goods. When owning farmland you will be able to order your serfs and therefore manage that process.

A great variety of wild animals will be present in the wilderness of Rex; including bison, horses, deer, plains and snow wolves, rams, foxes and tigers. All of them can be hunted by the player for meat and fur, providing good supplies for armies on the march, whilst predators such as wolves, foxes and tigers will be actively hunting prey like deer or bison. Additionally, the player will be able to catch wild horses roaming around the plains of Rex, if you've recently lost yours and wish you had a faster way to reach your intended destination or simply can't afford the price asked for by your town's horse merchant, but of course you'll have to trap your new horse or run him down first...

Players will be able to acquire pets throughout their journey in the world of Rex. Those will act as loyal companions adventuring and possibly fighting alongside the player. As of now the only available pet is a German Shepherd, though more will probably be added as we go along. 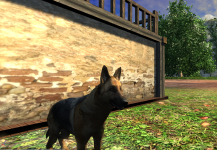 More on merchants and the way they work in Fortis Rex, plus additional in-game screenshots of the City Of Tarra and Nelson, and more info on the Official...

We're developing the RPG components in Fortis Rex. We've included a new screenshot and a description of the new system.

We've been really, really busy working on our mid-second alpha, here are some new screenshots(and a new video) of our recent work, oh and don't forget...

We're back with a very beautiful update, foliage in Fortis Rex.

Trying to get your game on desura. Is there a problem with buying something on desura? Can you even purchase games from them anymore?

Desura's parent company, Bad Juju, filed for bankruptcy bit over a year ago and all Desura staff was laid off. They are basically done for just waiting the verdict from the court. Last we heard one of the main creditors was interested in buying desura but even that was some four months ago. So don't buy anything from there. Devs won't see a penny from it.

As for Fortis Rex, at least according to their trello board (https://trello.com/b/IAglFsCX/fortis-rex-rise-of-the-king-roadmap) they are still working towards third alpha (v 0.7) but I can't find any info on how they plan to distribute it or how they plan to provide previous owners access as there is no one on desura to provide them the information who owns the game there.

Im having an issue where if I talk to people the dialog stays up after I talk to them and I can't figure out how to get out of it. Also in places it does not work all together, a bandit tried to sell me things, but the dialog box just went away when I tried to buy stuff from the actual merchant. hope this helps!

Hi! There were several terrible issues with the earlier First Alpha, stay tuned to our Desura page for the release of the Second Alpha. Thanks! :) :) :)

Been following the development of this for a while, i think once it's released and stable i'll be creating a ancient world mod, specifically the roman empire, I've been itching for it for a while now, but great work!

Thanks! We hope to add mod support, as of right now, custom worlds can be created in the editor, but the only items that can be added are weapons and shields and inventory items.

nigga where are you? don't cancel this game

Im having an issue when I am making my person, it always crashes when I try to give him hair, so I can't play.

If there is some other bug, first set your hair when you enter into the menu, then mess with the sliders. :) :) :)

First of all, let me thank you for your support and apologize for that horrendous bug. The bug is related to the face width slider and hair. It is a major bug in the First Alpha(Fixed in the Second Alpha, to be released soon). When you create a new character, ignore the face width slider and manually set the other sliders(also ignore the "randomize" button), then you will be able to set your hair type :)

Indie
Tags
Embed Buttons
Link to Fortis Rex: Rise of the King by selecting a button and using the embed code provided more...