The small indie development group, "Rotators", supported by the main developer of FOnline, A. Cvetinskiy "Cvet", are proud to present FOnline: 2238, the new massively multiplayer game, free of charge, based on the famous award-winning cRPG titles Fallout and Fallout 2.

Bringing the single player experience into a massively multiplayer game was not an easy task. While merging the existing features with new ones in order to provide as much game experience as possible, the young developers aimed for the recreation of the Fallout world as we knew it back in the late '90s, keeping their emphasis on the alternative, unique universe and its settings. The game will remind you of Fallout 1 & 2 everywhere you go - the places, the people, the common history and the events that shook the world and keep it trembling.

Humanity, or at least what is left of it, has no time for a break. Faced with constant challenges, surviving in the harsh post-apocalyptic, post-nuclear, barren world, struggling for an uncertain tomorrow, the humans, ghouls and mutants are organizing themselves to push it through. To make it. To stay alive. Each group, each place, each organization with its own agenda, with its own ideology, fighting for their place under the scorching Sun. What they believe may be right or wrong... Who are we to judge, while striving for the same old necessity - survival? 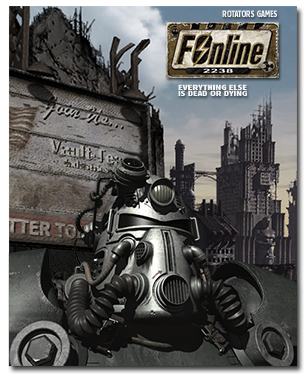 The game adds several unique features regarding the players and their interactions, be it with other players, their respective groups or NPCs. First of all, there are groups: factions, gangs - call them whatever you like, which determine the fate of the world. Some of them are more powerful than others, some are cunning and treacherous, some even hideous. But they are there, conflicting with each other, or aligning with the policies of the greater powers - those who have technological advances, political power or any other advantages over them, or are just plain bigger. Choose your way: join your favorite group and spread their agenda throughout the wasteland. Decide for yourself how to handle the resistance - with good will or stubbornness. Respect the authorities or lead a revolution to throw them off the throne - it is your world, you decide.

If you don't feel like belonging to a group and have your own ideology, then you can take one of the numerous paths the wasteland offers. Some of them are: bounty hunting, brahmin trading, crafting, exploring and trading in general. The brand new system of professions allows you to polish up your skills and learn things you will rarely find in books, giving you a certain advantage over other players. Scavenging, gathering resources and useful items will be an inevitable part of your FOnline: 2238 life. Crafting something useful out of the gathered junk or selling it directly to your favorite vendor are just a small part of the great possibilities this game offers you. And of course, you can just take them off someone else, simply by brutally killing him/her or using more exquisite methods, like stealing. The choice is yours - and so are the consequences.

From the technical point of view, the game will bring back the good old 2D isometric perspective, with english being the only supported language. The engine supports several new features like object opacity and the PNG graphics format. The scripting language being used is the AngelCode Scripting Library (or simply AngelScript) created by Andreas Jönsson, while system requirements for the game can be considered minimal for today's mainstream computing:

There are reports the game will run under Linux too (using WINE emulation), but we can not promise any official support for now (this may change soon).

Due to the fact that the game is currently in its medium beta stage (remember, the engine development has progressed much further and the engine itself can be considered almost fully functional), it is necessary to test the numerous features and additions. Taking this into account, the decision to organize further open beta tests has been made, with the first one starting on August 15th, 2009. Game sessions last usually for several months before the famous "wipe" comes, where all data is deleted and the game upgraded with new features, content and options. We are looking forward to seeing you in the game and hearing your impressions of our creation, so that the next open test session can really be a mutual pleasure.

In October 2018 FOnline engine source code was release to public! According to this event, Rotators announced FOclassic - fork of the engine with many improvements for current and future games based on FOnline engine.

After shutting down the FOnline: 2238 server an issue remained bothering the developers of the game: what to do with the code, tools and the custom created...

As some of you already know, we started a new project after the shutdown of FOnline: 2238. This new website is called fodev.net, and is meaned to be the...

On Sunday, June 23rd 2013, the FOnline: 2238 server will be shut down. We would like to thank the players who supported us with their suggestions, bug...

FOnline: 2238 is moving to a new server. Goodbye Paris, welcome to Berlin!

FOnline client application. Allows you to connect to the server and play. Updated 19/11/2010.

FOnline 2238 was closed in 2013. Now, there are FOnline Reloaded and few other servers as well:
Fonline-reloaded.net

Is there server software I can download to run a private server?

Yes you can download FOnline Reloaded SDKs, FOclassic and others.

Fonline is best game ewer but we all now its buged as hell has wierd lags and just f up hard, its made to be turnbased and ended real time, so i am proposing to remake this game in Unity or UE4 full realtime somthing like this [url=https://vimeo.com/95885635]https://vimeo.com/95885635 [/url] just litle more Fallout perspectiv. I maded some game concept its rought even writed some story just for fun ofc i accept any pointers and ideas this shoud be comunity game thet we all love to play. All fonline players unite, ps Brahim Boys ruls

I know to use Blender Sowlidorks so i can make 3d models i sux a litle whit texturing but will try too
Anybody iterested in helping email me imejlzaigrice@gmx.com
About art i would go full Folout looks just duno cuz copyrights so i took some google images here is pdf version
[url=https://www.dropbox.com/s/twgkamsqupu90po/gameidea.pdf?dl=0]https://www.dropbox.com/s/twgkamsqupu90po/gameidea.pdf?dl=0[/url]

And i will always rember Diamond Borne as retard of year

I remember this, one of the worst game i've ever played.

All hail the noob!

Yeah i'm really are a noob in this game because right after the beginning a guy try to hold me ransom by blocking a door and the way out and keep asking for all item i have. When i logout and login it doesn't actually get me out of there, instead it left my toon standing around so the guy can just kill me and take all my things.

Fonline it's not a fun game, it's a retarded piece of script kiddies ****.

Fallout 2 has become the grounds of online multiplayer, a feature the Fallout series always seemed to need, and it works, and it's fun. What more is there to say?