Dwindle is a turn-based strategy game that can be played on a mobile device or in the browser against a computer or other people.

A new kind of challenge. Dwindle has a novel game mechanic. Take turns moving a shared location chit around the board. Each move is governed by the tile of origin and each move eliminates the tile of origin from the board. Plan your moves carefully, set up traps, and force your opponents to do your bidding.

Multiple boards. There are several boards to choose from, ranging from a Simple - the 5x5 starter board - to Diffraction - a large board with limited travel between its two halves. New boards are periodically added, so things won’t get stale.

Endless possibilities. Between the multiple boards, the number of opponents, and the variable levels of difficulty, you can always find another way to pay. Mastered beating one player on Simple? Try two. Maybe move up to the Intermediate board.

Test your wits against another person. Dwindle can be played against people instead of the computer. Create a private game to be played with a friend, or be matched with another player.

Pause and resume anywhere. Create an account so you can stop your game on one device and continue it on another.

No need to stare. Dwindle’s multiplayer mode can be played offline. Does your opponent take a long time to think? No problem. Just close the app and you’ll get a push notification when it’s your turn.

Responsive developer. Dwindle’s development team is highly involved. Use the feedback button to tell us what you think and we’ll react as best we can, as quickly as we can. We love all kinds of feedback from “I LOVE THIS GAME” to “Can’t figure out X”.

Regularly updated. Keep yourself entertained with new features and content delivered on a regular basis. Leaderboards, more sophisticated anonymous games, new boards with mind-bending properties, and new kinds of tiles, are all on the docket.

Free, frictionless play. Dwindle is free to play, has no interstitial video ads, and requires no in-app purchases to get the full feature set.

Try it now. If you like turn-based strategy games like #Chess, #Checkers, or Ploy, there’s a good chance you will enjoy Dwindle, too.

Dwindle's rules are simple but that does not make the game easy.

Each game has the following elements:

Following are all of those elements, annotated: 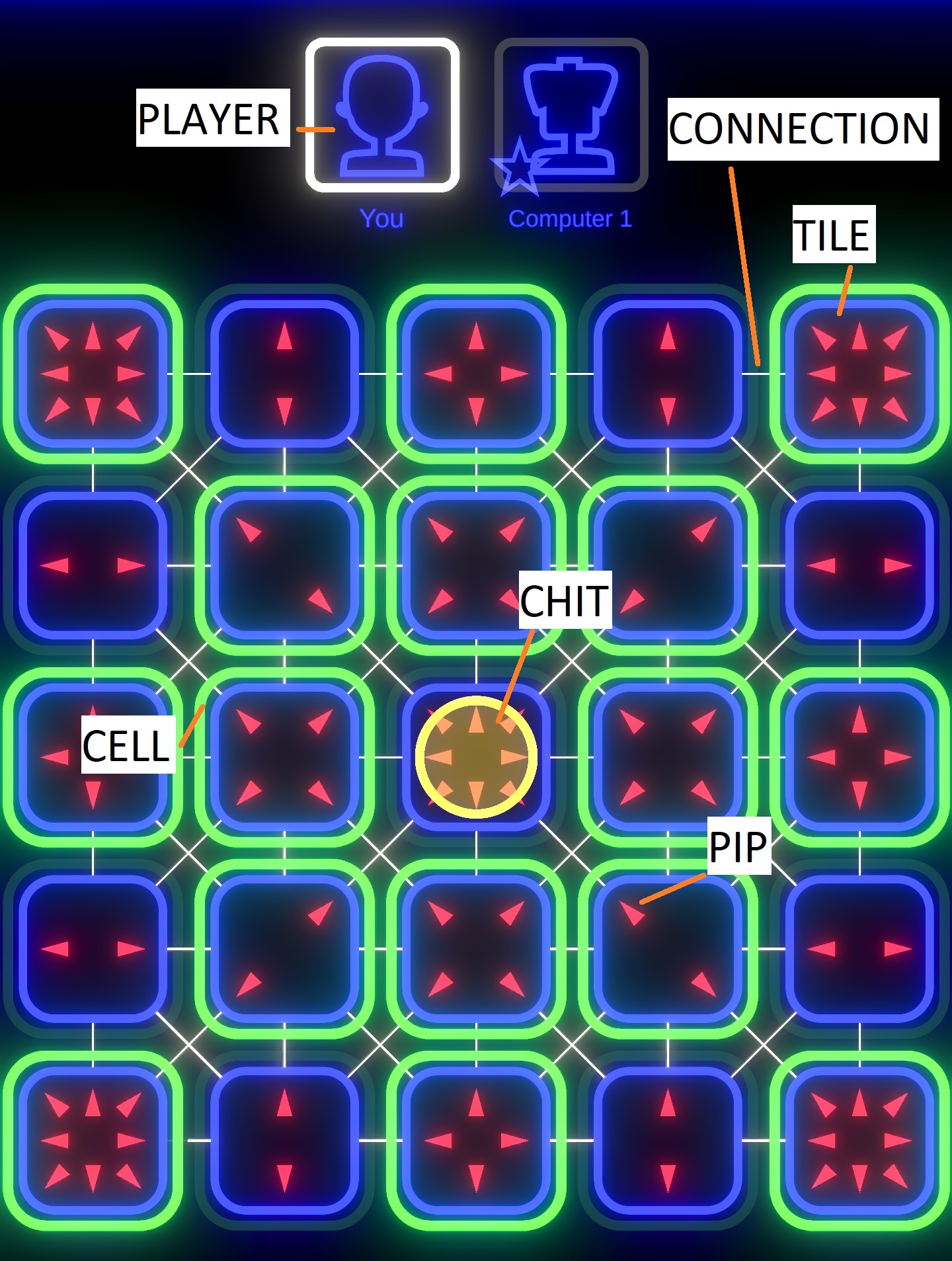 Players take turns moving the location chit from one tile to another. The set of available moves is governed by the structure of the board and the tile of origin. Generally speaking, the tiles govern which directions you can travel and the connections on the board limit how far can be traveled.

Whenever a player moves off a tile, that tile is removed from the board. Consequently, it cannot be used as a destination for future moves. So each move takes away options from futures moves, causing the available choices to dwindle over time. Hence the name.

Each tile has pips that define how you are allowed to move off of that tile. Wedge-shaped pips indicate that you are able to travel in a physical direction along as many connections as you like.

The shape of the board also limits your options. A pip pointed in a particular direction does not necessarily mean you can move to any other cell in that direction. There must be an unbroken chain of connections between the current cell and the destination cell. So the following board has a short hop that is not allowed and a long hop that is permitted. 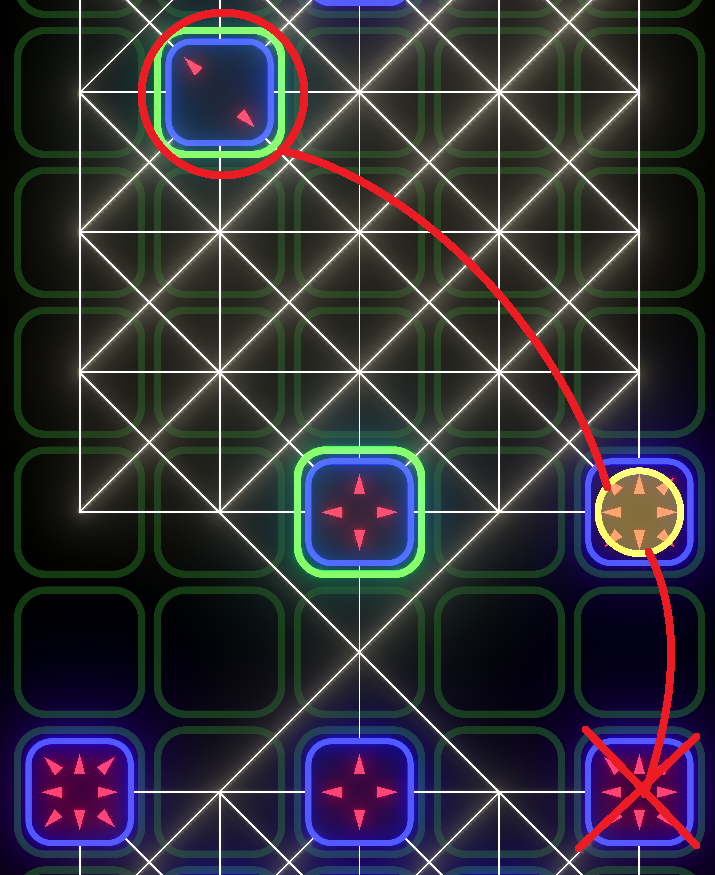 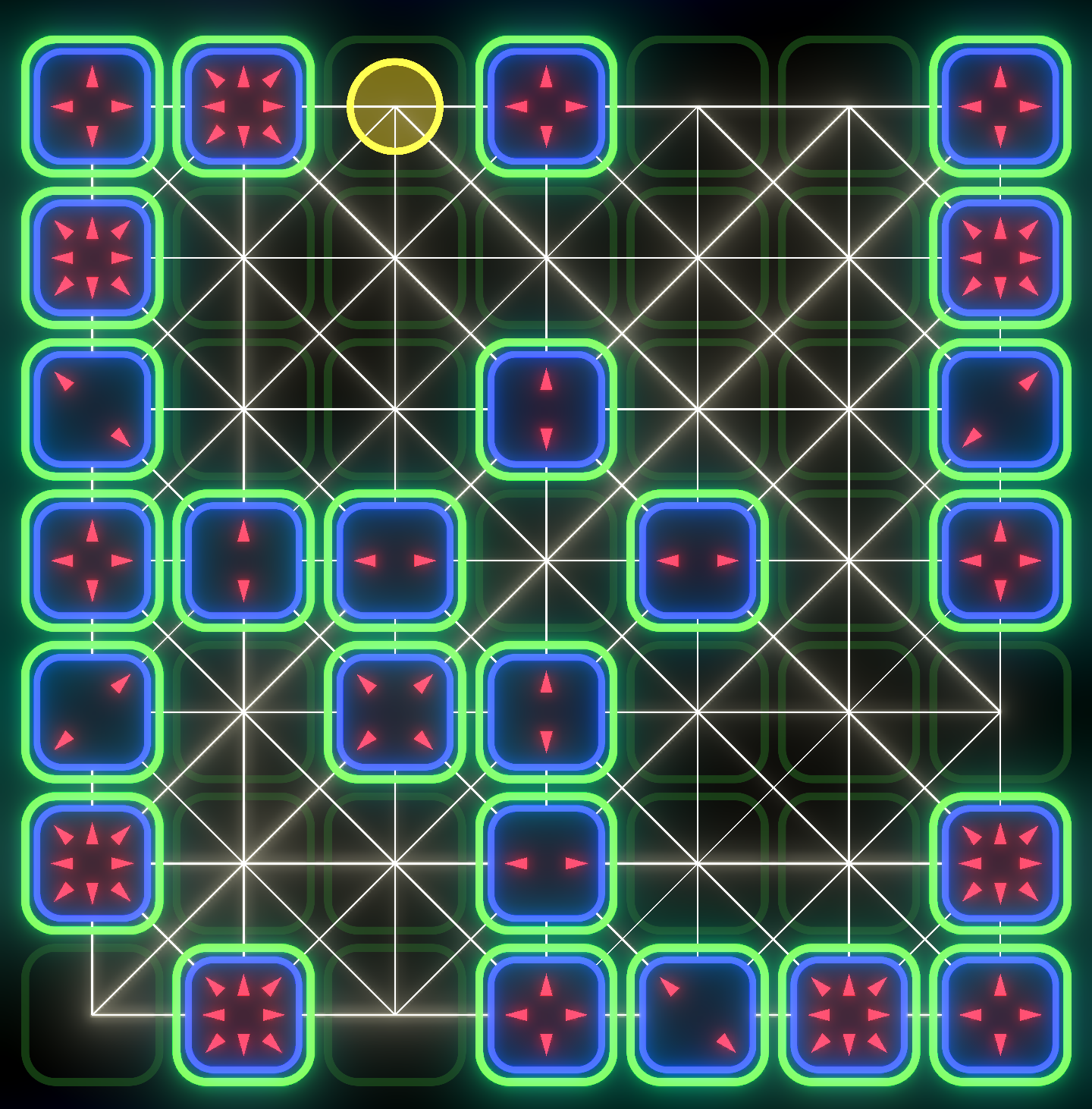 Victory is obtained by being the only player still active and having at least one valid move remaining. Practically, this is achieved by knocking out (or causing to be knocked out) all the other players will preserving at least one tile on the board.

Defeat is the result of being knocked out. A draw is a special kind of defeat in which all players lose (as a result of there being no more tiles on the board).

DROD: The City Beneath Turn Based Strategy