Dungeon Nightmares II is the follow up to the cult classic horror game played by over half a million players on all platforms and has been called one of the scariest games created.

Dungeon Nightmares was originally made for mobile in late 2013 and was later released for the home computer early 2014 on www.gamejolt.com. It was an overnight hit with the community and is still currently one of the highest rated games on there to date.

The game is inspired by classic roguelike design which includes 100% procedural-generated maps and permadeath. These features play an important part in making this game tense with the feeling of dread & terror as you walk the hallways of the dungeon.

Countless hours have been spent watching the thousands of YouTube Let's Play videos to see what worked and what didn't.

The main aim for this follow up is to amp up the level of horror and produce something even scarier.

So I've been quite busy on the side working on a few things. Today it has been announced that one of my earlier games, Dungeon Nightmares 1 and 2, will be getting a remaster treatment and coming to the Nintendo Switch exclusively this fall.

Check out the trailer I made for TGS :)

Welcome to the Challenge Chamber

A sneak peek at a new mode called The Challenge Chamber

Early Look at "The Tortured Soul"

Just last week, Unity 5 was released with a bunch of new features that I could use for free! As I still use the free version of Unity, this has been a...

The Traps of Dungeon Nightmares II

Such a Good game and really keeps you on your toes!

Recorded a few play throughs of the full game on my channel, which is still on going!

This is one of the more terrifying games I've played. It's got excellent pacing and beautiful sound design. Even the doors opening is terrible! And by terrible I mean awesome! ;)

Like everyone else, I'm on the edge of my seat waiting for the full release.

Really good horror game, definitely scared the pants off me!

I braved the 1st night and did a video on it! I got very lucky in this video, and then not so lucky... Again, great game. Can't wait for the full version :)

Anti Casual Gamer's here just did a lets play of this, may be a bit late but still hope you enjoy, still just starting out youtube so a view and like would be really helpful thanks.

Well dunno if you check Gamejolt or not but I also commented there x) Just wanted to let you know I am so excited for this because Dungeon Nightmares 1 was amazing :P Dunno if you remember me or not xD But I am super excited :)! Can already tell this game is gonna be awesome! :D Can't wait to see the story ^^! I also did a video on it :)
Thank again K Monkey! :D You're awesome! 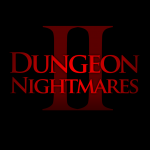