Is a hopper inspired by classic Atari games and modern endless runners. Race to the end while avoiding bullets, blades, and bad guys.
Now with Challenge mode. See how fast you can beat the weekly challenge levels. But don't move to hastily, you only have 3 lives. 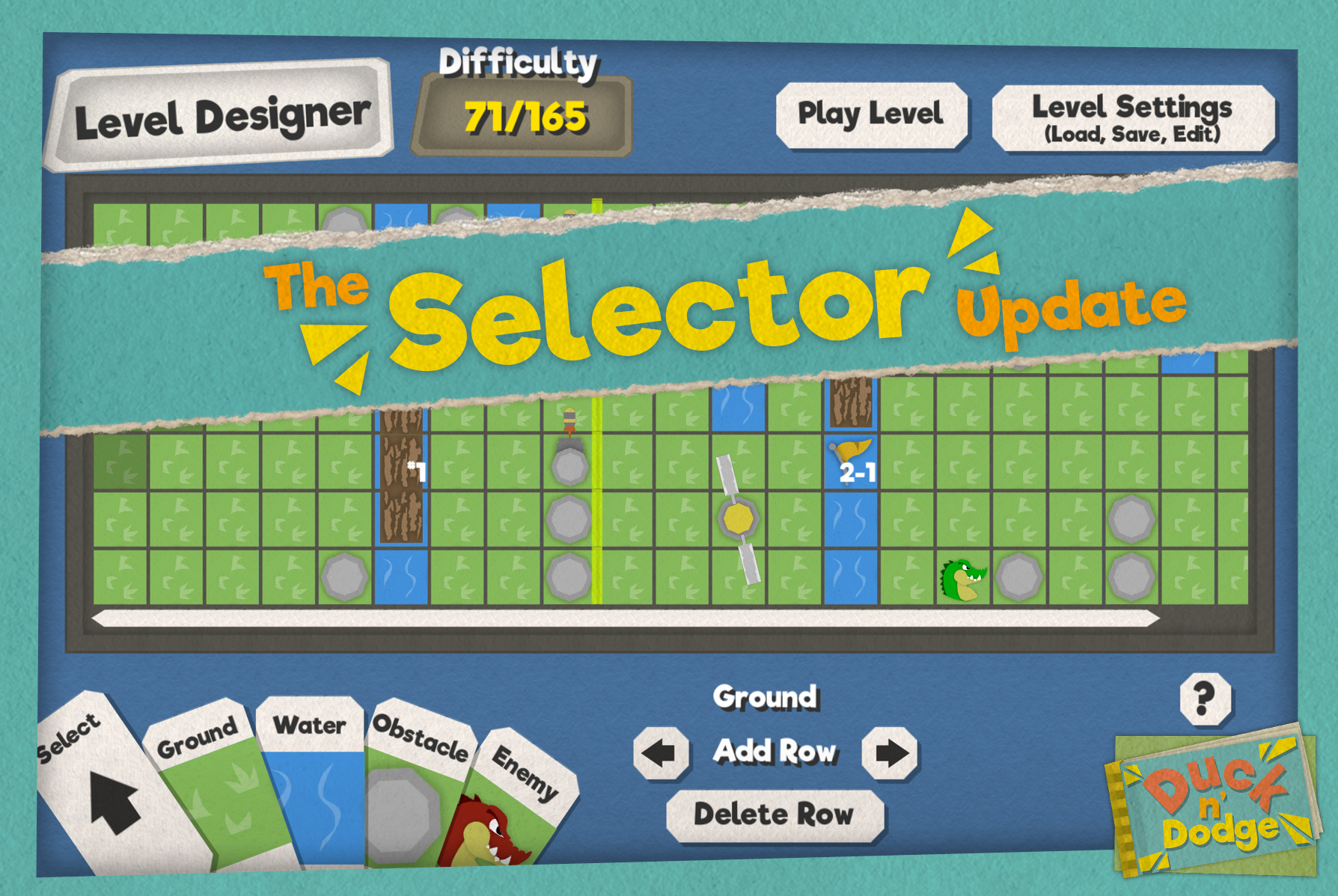 Changes:
- Added a Selector to the level designer
- This allows you to insert and delete rows around a tile you select rather than just at the end
- It also lets you edit the properties of special tiles like spinner blades and logs that have different types
- You can drag move the level when in select mode so it's easier to scroll around
- You can select a tile and see it's description by clicking on the question mark icon
- Red and Purple Enemies now have a longer delay if you enter their range and they need to turn to face you
- Red and purple enemies also run faster when in sight of you like in earlier builds
- Made it so if the player jumps behind a rock, the camera moves a little to give a better view
- Added a tutorial tip about controls for first time players as well as optimizing the first tutorial levels
- Added a flashing color when players are running out of a powerup so they know when it's about to end
- Made various changes to the reward system
- Made it so reward icons spawn faster from the crate
- Made reminders appear on the main menu if a player is returning and has a new reward
- Added a plus coin counter to completing goals so players know how many coins they get
- Made it so sand storms can't happen when it's fully night time
- Added a mesh to launchers to block the back of the barrel

Fixes:
- Challenge mode now works better and doesn't crash at random points
- Stopped previous levels from effecting the terrain color of challenge mode maps
- Fixed a few bugs in the level editor dealing with saving and loading an open level
- Fixed the quit button crashing the game
- Fixed a big with goal crates not opening
- Optimized the level designer a little when re-loading a level after testing
- Fixed a problem where there were two pieces of water over one another
- Removed the coin falling effect when not recieving coins
- Sinkholes no longer explode players
- Sinkholes are now more consistant in their function, stopping a player's jump from all angles
- Fixed the login screen pulling up the challenge screen instead
- The top welcome text was the wrong scale and isn't anymore

The delay was worth it. This build is solid and filled with new features.

New character, new biome, tons of rewards. So many features we can't list them all.

Powerups have come to Duck n' Dodge! We have 5 power ups that will change the game in different ways.

An all-new "presskit" is now available to check out here on our indieDB page! Highly recommended for YouTubers, Twitch/Hitbox livestreamers, and gaming...

We found a bug with the level selector and included a new character.

The most requested level designer feature has now been included. More fixes, features and fun.

A total revamp of the reward system. A new biome, new skin, a better feel.

Now with an in game level editor. Make and play your own builds! Now with less bugs.

Now with an ingame level editor. Make and play your own builds!

Thanks I appreciate it.