Now that I’ve added Drop Down Dark to IndieDB I wanted to start a Dev Blog, detailing the main stages of development as it happens. However, as I’m already four months into development on the game, I’ve decided to go back in time and cover some of the early stages in case anyone is interested…

So what led me to start making this game? I’ve been a professional Game Designer for 20 years now and been making games in my bedroom before that from the age of 11 (started out with VIC-20 before moving to C-64, then Amiga). As a Game Designer I began designing games on consoles- the N64, then the PS2- platformers and 3rd person Action Adventures and a fighting game. I then moved company and worked on designing mostly Racing Games for 8 years, before developing some mobile games and kids games more recently. If you’re interested you can find my CV on Linkedin.

Anyway at a previous company, Firebrand Games in Glasgow, as well as making a lot of licensed racing games we also conceived and developed an original sci-fi game, Solar Flux, originally for tablet and mobile then later released on Steam. 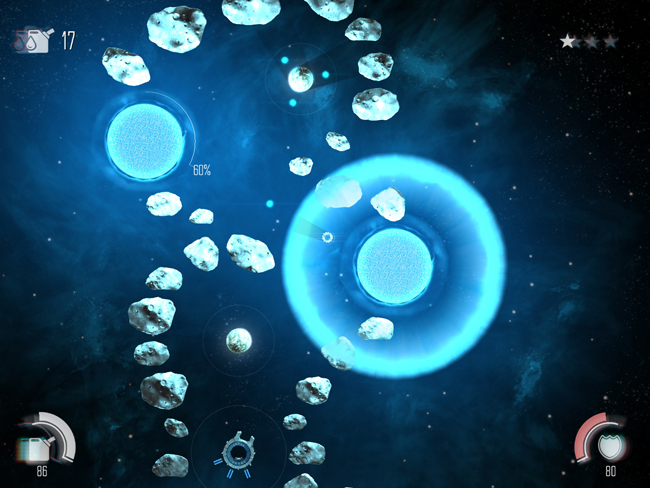 At its heart Solar Flux was a thrust game- by that I mean a game where you manoeuvre a spaceship by applying small amounts of thrust. As the ship is in space there is very little air resistance or friction so almost limitless inertia. The gameplay comes from fighting this inertia, applying the right thrust at the right time to navigate the environment. Thrust games have been around since the dawn of videogames and classic examples include Thrust, Asteroids and Lunar Lander as well as many variations and evolutions.

I’ve always loved thrust games as they have a very different pacing and feel from most 2D sci-fi shooters which usually have fast, easy to control motion- often with twin stick control. The gameplay is usually more about avoiding enemies and enemy fire than navigating the environment. As well as being a thrust game, Solar Flux was also a puzzle game- which was cool- we designed some very unique puzzles involving planetary gravitational pull and using the shadow of planets to hide from the deadly glare of suns. If you like simple but deep cerebral puzzle games with space visuals and ambient soundtracks you can check it out on Steam.

The decision to make Solar Flux a pure puzzle game was a good one, especially as we were initially targeting mobile devices. However throughout development on that title I always yearned to make a thrust game with combat, which Solar Flux doesn’t feature. I remembered loving a game from my childhood called Oids which originally came out on the Atari ST. Oids was a thrust game with combat- a blend of side scrolling shooters like Defender, Nemesis or R-Type with thrust controls. It was great fun, and something I haven’t seen recreated too much since. Thrust games are not everyone’s cup of tea as they require patience and foresight as much as lightning fast reactions and their slower pace can be the opposite of what people normally associate with a shoot em up. 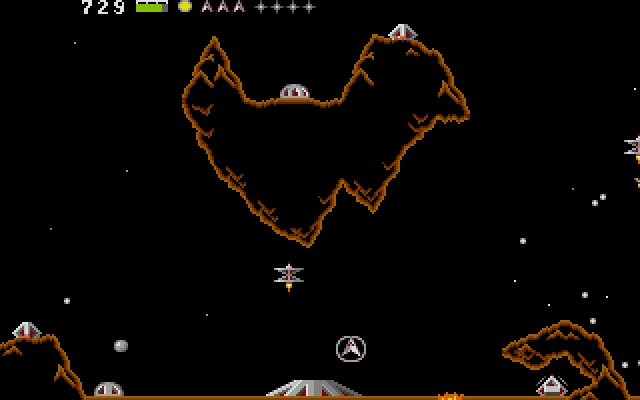 So when the time came for me to begin working on my own self developed title, it was these memories of wanting to make something a bit like Oids that stuck with me and inspired me to begin designing Drop Down Dark. I wanted to make a cool sci-fi/horror shooter but with a slower pace, and thrust controls. Solar Flux with guns and terrifying monsters.

As well as this I also wanted the levels to be procedurally generated so the game would be different every time you played. One of the weaknesses (and strengths for the coin-ops) of classic shoot-em-ups were they could be learned- in fact the way to progress through them was to learn the levels, the enemy patterns and where exactly to move at any point in the game. Each time you played you’d get a bit further not so much through your improved skills but via gradually memorising the game stage by stage. This is fun in its own way, but doesn’t give the player any sense of exploration and only limited surprise and wonder- once you’ve seen something once it will repeat every time you subsequently see it.

So, ignoring the technical challenges at first, I decided I wanted to make Drop Down Dark like a classic thrust shooter, but with more modern roguelike elements- with randomised procedural levels, challenging gameplay and permanent death. This, together with an idea on concept and story was to be the bedrock for my vision for the game and it remains so up until now.

In the next update I’ll talk about how I started out- choosing tools, first prototypes and how I went about designing the procedural level systems. Thanks for reading!

Run For Your Life Roguelike