Drekirökr - Dusk of the Dragon

"Our world is beatiful isn't it?".
Altered by human's stupidity, natural order simply vanished. As fantastic dreams like magical capabilites and teleportation were made possible, our worst nightmares were also breeded. 'Warlike investigations also were at people minds, so bizarre creatures created were too'.
And so, catastrophe originated. Heaven or hell, that doesn't matters now, as humans need to survive! Those new creatures struggled against their fragile masters, vanquished loads of human settlements and disgraced all the almighty human existence... to just a mere small group.
Then, our saviours appeared from a different dimension. They said that they were from another plane of the Earth. They fought against our nightmares and made them flee, with a reasonable amount of losses as a price. Who were them and what was their goal? Surely didn't mattered at the time. But some of the creatures were that powerful, that only by leading them to a deep sleep made a difference, and were confined to the deepest places on Earth, and even some were launched to space.
Now, approximately four million years after that incident, human life is different. That magic that once was part of an emerging technology, now is natural. Most people have some kind of it for their personal use. Is not a menace, neither unusual. As the real danger for us mankind are the creatures lurking around cities, that once were our highest achievement.
Now you have the chance to start your journey as Hikari Morishita, a rather young lass, member of the Academy, the International Organization at charge of protecting our fellow and humble humans at every possible chance. And maybe you'll find some strong creeps doing revolt by there. Nobody knows what will you encounter on the world of Drekirökr.
And even some STRONG creeps would return from their deep reeves...

*An epic adventure with a lot of places to explore and lots of content!
*SNES/GBA styled low-res graphics.
*Fight against hordes of enemies in tactical battles!
*A lively world! Simulation of time passing, that influences most places!
*And best of all, forever free! Forever open to you!

NOTICE: This game is being made in RPG Maker XP. If you have it, you can "mod" it. So when the game is up, feel free to do so, and add them here! It's some kind of opensource.

Our Group Advertising:You can check for more games here! (made by some friends of mine). Those are on spanish only though!

We are a group of friends under some kind of alliance.

This is the Hello entry!

Hello readers! Today, since this game is kind of new in the mighty IndieDB comunity (1-2 days), I'll start with this, a introductory entry.

Drekirökr is a roleplaying game, being developed by me, Orochii Zouveleki (pseudonym). Being inspired by my favourite games in my youth, I started to make stuff with game creation software, getting to the RPG Maker series, and so starting in some point what is now known as Drekirökr.

So, again, what's Drekirökr? It's a jRPG-style inspired game, with a lot of inspiration from the genre, I have to say (I'm a RPG lover after all), but of course trying to take a step into some new lands. It's a classic RPG, with a touch of openworld, akin to Squaresoft's SaGa series. I fell in love with that mechanic, so I thought about messing a little with it. And here it goes.

There's still a lot of work to do. The main systhematics are already done, maybe some tweaks here and there, but there's a lot of graphical work and content creation to be done, and actually only one person in this (there are code contributions though, for which I'm VERY thankful since I'm not entirely a coder, just by need). I'm just saying that this will take a little long, but the journey is safe and will be done eventually. 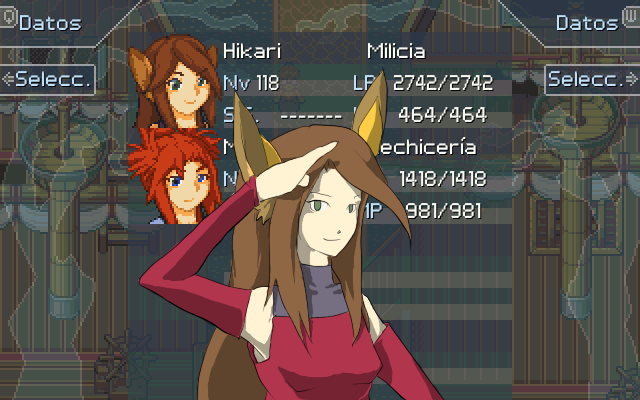 And that's it. I'm not good with words, and I probably just repeated 20 times the same idea. But I think I made some points here. Be safe though, I don't make these mistakes with the game. It's just while writing entries of these kind. And worst of all, English is not my native, so please excuse me for any grammar incongruence or something. I'll get some help with it.

Thanks for reading, I'll be writing something more meaningful, and shorter, in a couple weeks about how progress goes, and some other game related trivia, like the meaning of the name, or... something else. You can write what would you like to know in the comments, that helps my little brain to aoid exploding.

This is Drekirökr, in a demo version. Lasts for around 1-2 hours. It includes both English and Spanish languages. The file is a RAR file, please install...

Twitter
Tags
Embed Buttons
Link to Drekirökr - Dusk of the Dragon by selecting a button and using the embed code provided more...