The Gunslinger (Mr. Good Looking): True to the retro shooters, he moves fast, can find weapons scattered through the levels and doesn’t even need to reload them.

The Swordsman (Defiance): Instead of shooting, he slashes, cuts and breaks enemies, he can only use the Ximira sword, but hidden in some levels there are scrolls that can teach new skills and wielding styles to him.

Levels are small, detailed and intricated, so you can rush to the end if you want, but there are a lot of secrets, finding them will help you in the long run.

The game has roots in Old School FPS (Boomer shooters) in the movement and fluid controls, but have some ideas of its own:

Every level has awesome music, you know the best part? There are two versions of each track, one for each character!

Switching between Defiance & Mr. Good Looking not only helps you in combat and resource management but also changes the level theme!

I'm here to announce that Defiance & Mr. Good Looking finally have a Steam page and it will launch in early access April 28th! 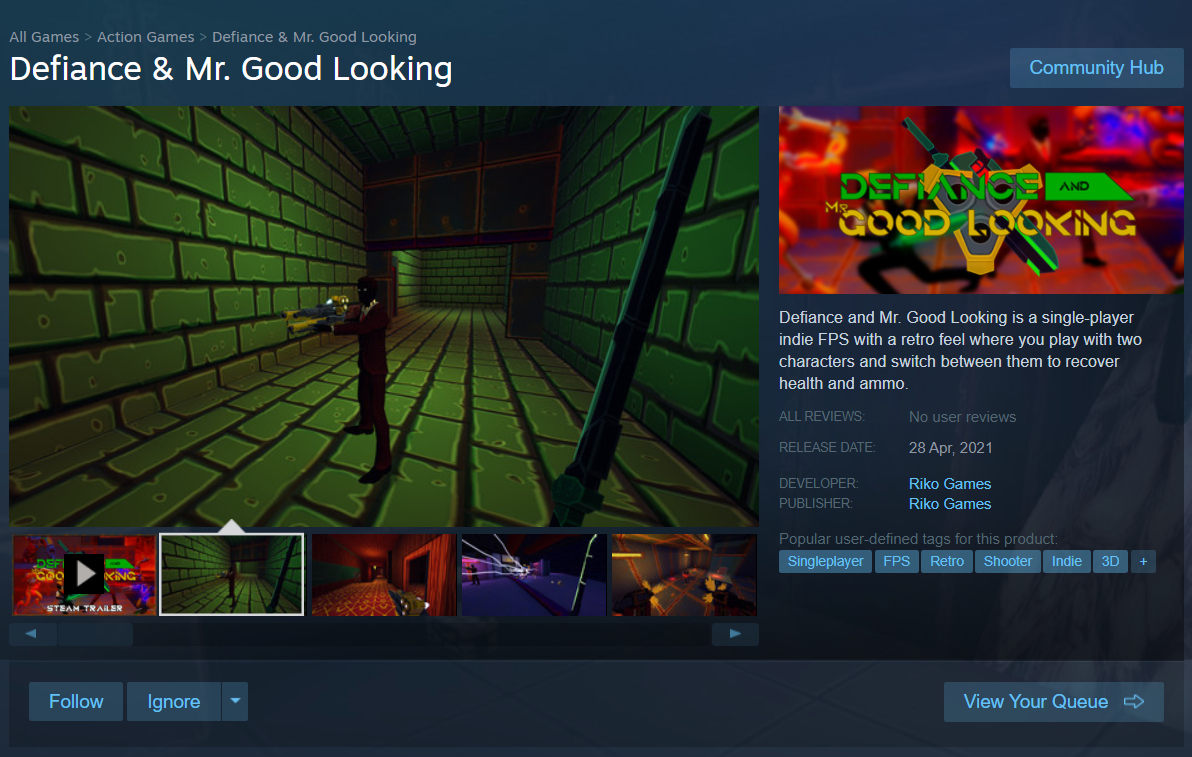 Shoot with one character, slash with the other, switch between them to keep health and ammo high.

Defiance & Mr. Good Looking is a retro-inspired single-player FPS where you choose two characters to play. Switching between them is the way to keep them alive with health and ammo, as by destroying enemies with one character the other will recover those resources.

Each level has two soundtracks, changing characters the music will also change. Each character has their own arsenal of four weapons and all have secondary fire, these weapons are spread across the levels, often hidden somewhere.

Your enemies are adaptable, having parts that can be broken or destroyed to change their behavior, making your opponents a greater or lesser threat.

There's a lot of improvements in the UI and the movement, the Save system received a heavy overhaul, now the levels have checkpoints and it's extremely quick to load then, Dusk Dude can strafe hop, there's more... much more and if you want to play it check the store page and Wishlist it!

The most important changes in the update 0.4.0, including the unlockable character

Colossus Wolf Runner is a first person platformer where the route is built on the back or around Colossi.

Hi it’s been a while, today i want to talk about creativity on the melee systems in some FPS

Update 0.3.3 is here it's flashy and have some bug fixes

Update to the Alpha/Demo release with new mechanics, a bunch of bug fixes and some better visuals

Free Alpha release with the 4 initial levels and some bug fixes To install it just extract the .zip file and execute the "Defiance and Mr Good Looking.exe...

Free Alpha release with the 4 initial levels, to install it just extract the .zip file and execute the "Defiance and Mr Good Looking.exe"

Oh! Now this sounds like something down my alley. Will track!