Deck RX is a deckbuilding racing game. Race and card-battle your way for immortality as you unlock new cards, cars, pilots, and hand-crafted race tracks on different planets. Design your racing strategy, build up your deck, combo your cards, and survive to the finish line!

After a few weeks, I’m once again here to show you what we’ve been working on for Deck RX but this time, it doesn't affect the content of the game although it's a really important change. We’ve changed the main logo of the title. We’ve been considering this for a long time now and we think it fits really well with the title because after almost two years of development we now know a lot more about Deck RX in comparison to when we first designed the logo.

We’ve made this decision to give the title a different style and show how we really want the game to look like. Here’s a comparison between old and new logo!

As you can see, the new logo is more simple and minimalist. We really think that the old one, even when it was more colorful and strong, didnt fit too well with the Deck RX aesthetic and it was less versatile. With the new one we seek contrast, combining it with the new main capsule design for the Steam store page. We also changed the subtitle "The deckbuilding racing game" for "Racing deckbuilding" simplifying the concept. 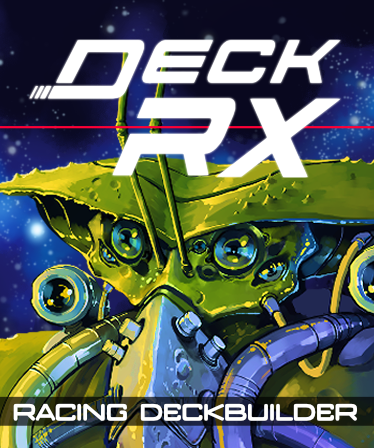 We’ve been studying similar capsules from deckbuilding titles to give Deck RX our own outer space/sci-fi style. Finally we chose Locust KV.26 stalking in a cosmic background accompained with the new logo.

This does not mean we got rid of the old logo, we are on a transition period right in the middle of the Deck RX development and this goes with both in and out-of-game aspects of the title. We are just trying what works and what does not. We just want the best for the game.

For example, do you think the Deck RX Kickstarter would have gone better with this new logo? We will never know but share your thoughts down below! We are reading you!

Hope this update finds you well and see you soon!

How's going the development of Deck RX after its Kickstarter campaign.

We wrote a post-mortem for the Deck RX Kickstarter campaign and you are able to read it!

With 30 hours left until the end of the campaign, we have reached 100% funding!

We want Deck RX to have a map editor after the official release of the game.

The Monster Breeder Turn Based Strategy