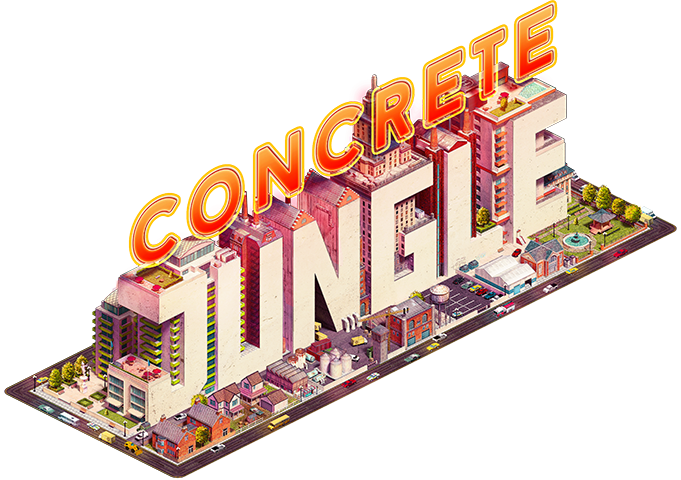 A city planning game that swaps micro management for deck-building!

You have a deck of selected cards which you can use to place buildings. Each building will affect it’s surroundings in different ways. The aim of the game is to clear city blocks by gathering the required number of points from your residents, giving more room to build. As the city grows, bigger and better new buildings can be added to your deck!

As you get opportunities to hone and refine your deck, residents will demand more from you. You’ll find yourself inadvertently creating zoning puzzles- playing against your own past planning decisions!

Alternatively engage in competitive city planning against challenging AI or local players. Take it in turns to place buildings in the same city and battle over the affection of your citizens!

Well here we are guys! Concrete Jungle will be released in just a matter of hours. I’ve been busier than even prepping for this, it’s been a long, long time coming and a huge amount of work. But the game is ready!

So I’ll take this opportunity to thank all the backers, anyone who has supported the project and everyone who has followed it at IndieDB. It’s been such a great year being able to work full time on something I love. I hope the release will allow me to continue to do so!

This is by far the biggest, most ambitious, and easily the best game I’ve ever worked on. The kickstarter funding allowed it to be so much more than it’s original target. It plays, looks and sounds better than I could of hoped for when I started this project.

Development has reached it’s biggest milestone, but there’s still more to do; over the coming months I still plan on adding the extra buildings, night mode and language support. Plus I’ll get to work on ports for iOS and Android, and depending on success more platforms.

Concrete Jungle will be released today at 8PM GMT / 12PM PDT on STEAM and ITCH.IO!

I’ll leave you with this- the Concrete Jungle launch trailer. It’s a brand new trailer featuring the voice of Ben Britton (mayor Rick Selfridge). I hope you enjoy! TELL YOUR FRIENDS!

Mark your calendars! Concrete Jungle will be released September 23rd!

Finally an update! I've been working hard bug fixing and polishing the game, and introduced a water tile into the game.

This week I reveal the final playable character for the game and share some details on how I'm polishing up the game.

we dont need best graphic, all we need in city builder is how more it complex, and thats make it more interesting. This game prove it!!! BRAVO!

Very cool looking game! It's like Sim City and Carcassonne mixed and I love them both!

I was wondering though if you are in need of a music composer for your game. If you are, then I would love to offer my services. I've mainly worked on short films and commercials but I'm quite interested in working on a video game! You can see my work on my website www.transitivesound.com..

Good luck on the game creation!

Hello Juan! Unfortunately I'm not- I've had a composer make some tracks already. Excellent sounds though, I wish you the best of luck!

Thanks for the response, ColePowered! My best of luck to you and your game. It looks fantastic. If you or someone else you know does need a composer, do let me know!

and don't let the small amount of comments here let you down, I assure you there are people looking forward to games in this genre :)

This looks interesting, so it is a puzzle game? Brilliant logo btw!

In a way, I'd say about 50/50 puzzle/strategy game. It's hard to categorize it. There wasn't really an obvious category for it here on indieDB!

We Were Here Together Puzzle