Coma is currently in development, and is at the stage of an early prototype. We encourage you to download the Playable Prototype. If you find it to your liking and would like to play the full version once it is complete, please consider pledging to our Indiegogo campaign.

You can read more about the project below.

Coma is a Metroidvania-style action game set in a grim cyberpunk future inspired by the classics of the genre. Play as a member of an elite squad on a payroll of one of the Megacorporations, explore industrialized districts to find hidden, optional areas; fight with competition's mercenaries using your arsenal of weapons and unique abilities. Customize your character using multitude of passive and active implants, acquire new combat abilities and upgrade those already owned. 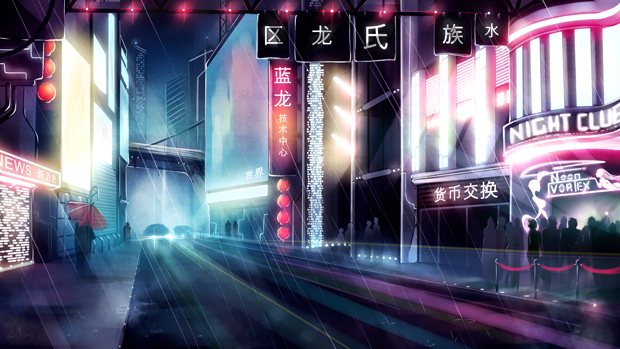 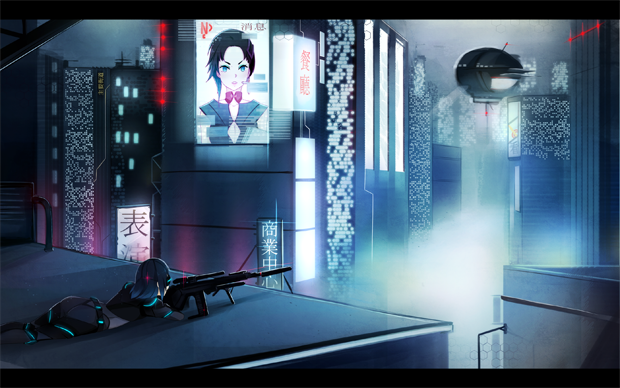 The game world will be divided into zones, each distinct in its look and atmosphere, all accessible from a hub zone. In the hub zone the player will be able to gather intel about an upcoming task, replenish resources, or pick up some non-essential sidequests. Fulfilling those will grant special implants, access to previously closed areas or the most valuable of all - information, that may lead to some sweet loot.

As the player progresses in the story and interacts with the world, the zones will change over time to reflect the progress, with new paths opened or old ones no longer accessible, so revisiting previously seen areas won't be a simple backtracking.

The player will be able to meet some quest givers in the hub zone. Those quests will range from fairly standard in the world of Coma corporate espionage to assassinations.

Fulfilling quests may reward you with some loot - access to otherwise not obtainable implants or upgrades, etc., some quests will have a minor impact on the upcoming missions - you may get a password to a terminal that unlocks a helpful shortcut or disables some of the security. On the other hand, progressing in the story may render current quests not finishable (for example, one of the sidequests may require gathering some data off a mainframe in a certain location but you destroyed the mainframe or the power source, and now you can't complete the quest). That said, Coma is not designed as a full-blown action RPG, with multiple branching paths in the main story and sidequests. Quests will be totally optional and non-essential part of the game, that give you more insight into some events or characters, and a tool for deeper world building. 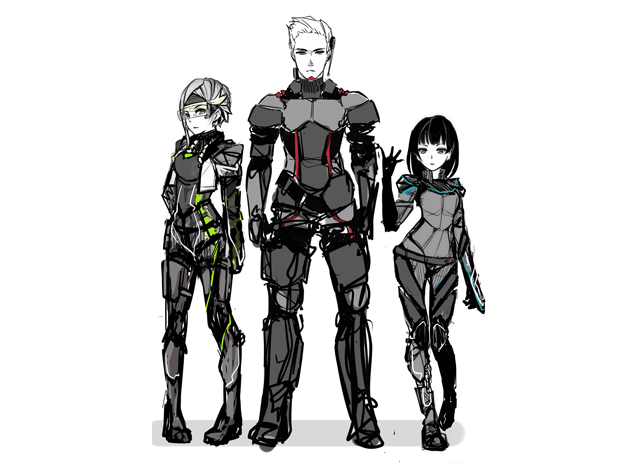 During exploration you will come across various upgrades. Upgrades are pieces of equipment granting the characters new abilities (or expanding those already obtained) used for level traversing and in combat. Some of the upgrades are character-specific, some of them are optional and acquiring them will help you find secret pathways and areas or help you with disposing of your opponents.

One of main advantages of being a cyborg is the ability of installing various implants.

Implants are completely optional character enhancements that can add or modify already owned abilities, allowing to create many, sometimes vastly different variants of the same character, tailored to your playstyle.

Do you find yourself taking too much damage because you like to go all in? Consider installing a medical implant which will slowly regenerate your life. Do you have a problem with hitting certain enemy? Smart lock-on will take care of it for you. Experiment with different implant combinations to make the character truly unique. 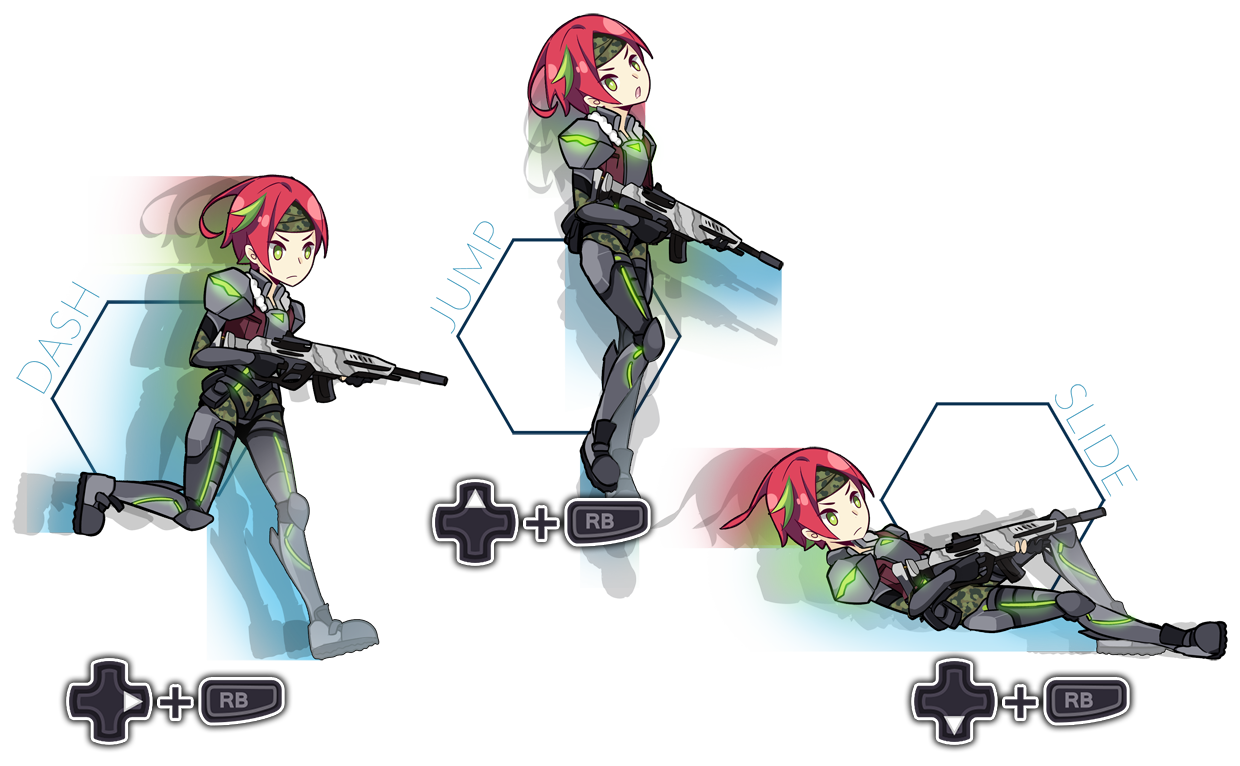 We want to put a heavy emphasis on mobility and versatility in combat. The player will be able to react to enemy attacks using various methods of basic and advanced controls. Apart from the fundamental movement, such as running, jumping, crouching, the player will have access to advanced movement techniques such as dashing, dodging or blocking. They can be used in combination with the directional controls, vastly modifying the performed move. Those advanced techniques will be granted by upgrades found during the exploration, and can be further enhanced to add various effects.

The primary means of combat in Coma are firearms. However, we want to make sure the combat is not boring and tedious. To achieve that, different enemies will be vulnerable to different types of ammunition.

Some enemies will have multiple defensive ‘layers’, such as heavy armor or energy barriers, which you will have to peel away. While fighting heavy-armored foes you will have to use armor-piercing ammo to strip them of their armor first, and then finish them off with the standard projectiles.

Furthermore, we want to encourage the player to use close-quarters-combat. While fighting against enemies utilizing multiple defences described above, after destroying one of the layers, the enemy will enter a dazed state, which you can utilize to your advantage by performing a melee move that will permanently disable each type of defense. Otherwise there is a chance the enemy will recover that particular defensive measure.

What would a world set in a cyberpunk reality be without some good 'ol hacking?

Cyber warfare, while being one of the crucial parts of Coma's combat and exploration, it will be totally optional.

Characters equipped with a combat hacking implant will be able to take control over enemy drones, defense systems and disrupt other cybernetically enhanced adversaries, or even make them fight on their side for a short period of time.

Higher tiers of the hacking implant will allow the player to hack multiple enemies at the same time, or even perform a powerful burst hack, that will affect everything in a radius around the character.

While fighting bosses, it may be beneficial to disrupt their targeting systems, disable the most devastating weapons or hack part of the level itself to open a new path in order to exploit their weak points more effectively.

Hacking will be a great source to obtain new intel about forces you're fighting with, get access to previously closed paths, or get some top-secret information. That information may be valuable both to your employers or to some 3rd party that's also interested in your work.

In contrast to combat hacking that lets the player instantly take over enemy systems in exchange for energy, we want the "exploration hacking" to be more involved. However, we would like to avoid making a simple minigame that leaves you with just the taste. We would like to create a cyberspace where the character gets "transported" and is represented by their avatar, where they have to face various obstacles and challenges. Failing those challenges or getting detected will trigger defensive countermeasures. In this cyberspace the character will still be controlled like normal, but will have a different skillset and equipment. You can think of it as something similar to Shadowrun's cyber combat, where a character is represented by a powerful avatar, facing manifestations of different firewalls, defensive subroutines and tracking programs.

To promote Coma and grow its popularity (top games), use the embed code provided on your homepage, blog, forums and elsewhere you desire. Or try our widget.

Download and check out the playable prototype of Coma!

Doctor Who : A Brilliant Game

A small adventure game based on the events of the movie "The Day Of The Doctor" for the 50th Anniversary of the franchise. Puzzle, Points & Click and...

Astroneer is a third person exploration adventure game set in an era of industrial revolution in the stars.

In 2047 : You are an amnesiac detective trying to uncover your past and the mystery behind the robotic killing machines who steal their victims identities...

Subnautica is an open world underwater exploration and construction game. We are Unknown Worlds, the developers of Natural Selection 2, and Subnautica...

RymdResa is an abstract Sapce Odyssey; poetry and art expressed throughout a lonely journey in space. RymdResa will be relased on iPad Wii U, PC, Mac...