We recap some of our GDC Experience and also show off our new gameplay trailer- which actually shows first person this time :).


This is the trailer that we were going around and showing off to all the bigwigs at this year's GDC.

GDC- The Game Developers Conference that runs every year in beautiful San Francisco and brings together the industries elite players for important business deals and networking as well as keynote speeches and roundtables.

It was our team's first GDC, and it was wild. Possibly the most frantic and fun week we've had to date as a team, we all ended up sick and exhausted at the end of it but we consider the event to have been a smashing success.

From the moment we first arrived at the conference on Wednesday, we didn't go 10 minutes without getting called, texted or emailed about a meeting so we were literally sprinting across the convention center from building to building trying to meet up with everyone and I have the blisters on my feet to prove it! I'll briefly list some of the cool things that happened in the intense whirlwind that was our 2012 GDC trip:

- We bumped into Minh Le - the creator of Counter Strike. He actually noticed our shirts and recognized us as the guys working on Chivalry: Medieval Warfare and seemed to be geninuely looking forward to it which was awesome to see. Minh was there promoting his new game, tactical intervention which has some crazy stuff like grabbing hostages and shooting at people from cars, check out more on that project over here: Ti.ogplanet.com

- We met with the very animated Joe Kreiner from Epic Games who had a lot of useful advice for us on marketing and some unreal-specific stuff. (By the way- Epic Games is awesome to indie devs and if you aren't using the udk, you should be. Grab it here: www.UDK.com)

- We had a meeting with Nvidia, that graphics card company you might have heard about. Just think- Chivalry in 3D where the swords actually come at your face and give you a true sense of depth in the combat. We're looking into some ways to make that happen as cool as possible.

- We had dinner with Evan Lahti- Senior Editor of PC Gamer at a very nice (read as: expensive) steakhouse courtesy of Tripwire Interactive (makers of Killing Floor, Red Orchestra etc.) Couldn't thank these guys enough for the dinner and other efforts they made to help make our trip a success. Evan actually ran a story about us on PC Gamer just after GDC and we are in contact with him about future coverage as well.

- We met up with Valve about some kind of PC Distribution service thing they have, apparently the kids these days are calling it Steam. No details on this one for you yet though.

- We also managed to get a last minute meeting with Kirk Hamilton from Kotaku who sat down to talk with us about our game- turns out we made an impression on him and he wrote us up in an article that hit their main page.

- And in some very indiedb related news, we also had the opportunity to meet up with some of the guys behind the great games on this site including: Alex from Depth (Sharks vs. Divers!), Ashton Anderson and the guys from Primal Carnage (Dinosaurs on PC and Mobile!) and Alex from Contagion (Zombie: Panic Source Sequel) who all had some really cool stuff to show and talk about. Additionally we saw some gameplay of Overgrowth (Kungfu Rabbits) and Warmgun (Post-apocalyptic Western on PC and Mobile). Was great to see so much of this community represented there!

All in all it was a crazy awesome time and we are just now recovering from all that has happened. As you know there is no rest for indie game devs though as in a few short weeks we will be hitting up PAX East, this time with a playable build! If you are in the Boston area and have a thing for swords, decapitations or trying out new games then make sure you stop by and check us out at booth 485!

Here is a picture of our team at our first GDC: 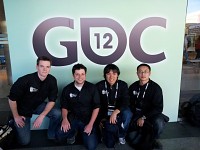 I like the colors in Chivalry a lot, but I think some shots would look a whole lot better with some atmosphere and DOF, so things look a bit blurred and blued out, in the distance. (on the castle siege map the visuals/ distances look a lot different than on other screenshots, e.g.)

Stellar job anyway, going from Mod to GDC in what? 3 Years? - well played!

It should be extremely extremely subtle, don't go overboard with DOF or else all the detail will be lost in the distance.

Remind anyone else of Age of Chivalry? The source mod?

Seeing as its made by the same people, that would make sense.

The fail is strong with this one.

Well I wasn't criticizing it, and I didn't know off of the top of my head the dev teams name. I apologize for my no doubt, horrendously offensive post, thank you for the internet flogging.

Noone blames you my compadre

Its the internet, don't take what people say so seriously friend. ^_^

Trailer is looking good. Was a big fan of Age of Chivalry and looks like we're getting an upgraded version of that. Shame we couldn't meet at GDC but our experience was very much like yours with meetings with many of those mentioned above especially our friends over at Tripwire. We had 8 people running around with all the meeting on day 1 and everyone's legs killing them. Quite exciting and glad to hear we weren't the only ones suffering/enjoying ourselves.

Thanks Brian, heard that you were over in Japan and couldn't make it. The rest of your guys presented the game well though. Best of luck with contagion, its looking great!

The game looks really AAA. I think the only thing what you should really work on is the animation. The characters anims are looking very odd and broken for now.

Sadly anyone who knows about War of the Roses won't be impressed by this, it is a good mod for HL2 but when you can get an in depth melee system and ranged system, like Mount and Blade or War of the Roses which also adds Mounted combat. I just don't think this game stands a chance

Wow, you are crazy. M&B has given me much fun but there are sooo many flaws, some of which Chiv has actually shown that it addresses. And this War of the Roses deal. It's not even out yet. How can you say they won't even compete?

As for horses.. Yes its cool and all. But it presents balance issues in a big way. I am not hating on Chiv for not tackling that beast of a problem.

Who knows I may end up getting WotR. And Ill likely enjoy M&B on occasion for years to come. But I can tell you Chiv will have its place in my collection. And if all goes as well as it seems to be going.. A big place in my gameplay time.

What year are you living in? This is UDK not Source.

Unreal Engine, not UDK. UDK is a toolset.

I'm sure people understood what I meant.

I am sure they did indeed, unfortunately, you didn't. I hope it's alright now.

Loving the video man. Lovin it. Some of the animations seem a little rough still but... Is it my imagination or has there been epic improvements and additions all around since the last dev blog deally?

this game seems to be suffering from the same poor animation as age of chivalry.

Eh, some of the animations need work but many of them are perfectly fine. And it is still in development. Only ones that actually bother me right now are the jump and duck animations.

Id be perfectly okay with all the rest so long as the game mechanics are solid and reliable. You know. Hit/block detection. How latency is handled.

I mean look at M&B. Many of us have had tons of fun with that game and the animation and character models are awful.

The animations and character models aren't awful in Mount and Blade, especially not for the engine they are on, and the limitations of most peoples hardware. The problem with the animations and motion capture, is that some of them make no sense to how someone would actually swing the weapon.

I think a lot of what we see here are, like the jittering, probably have to do with the netcode or similar. The animations definitely do need some work though I agree.

Looks awesome! The battle system seems a little light, without the impression of the impact, but maybe is just an impression =)

One thing that should you add is a finishing move when your Enemy's Health is low that would be great.

We had a great time, was cool to meet up with other indie devs for sure.

Why do I keep hearing Tripwire in these indie games that look really good, is it because Tripwire is publishing your game, depth, etc?

Because TripWare is indie themselves and started as UT2004 modders.

I know that, but why are they buying dinners for Torn Banner if they aren't publishing Chivalry?

if only Warband had those gfx!!!!

Your animations really need some work. Actually, reworking them should be your priority for the next time you show the game.