The last witch hunters, the House of Usher, were doomed to fall. In the house, “Lenore”, the powerful witch had been sealed away, never to be released again.

Roderick Usher, the last head of the family, went insane as he succumbed to the power of Lenore. He had no mercy for anyone, or anything, that stood in his path, even his little sister Madeline Usher. Just as she was about to meet her demise, she was led by the Raven who wanted to help stop Roderick’s madness. Madeline was led to the Great Witch Ligeia, the legendary witch who possessed the power of Black Witchcraft.

Become Ligeia and embark on an epic journey. The witch of legend has awoken from a long slumber and is now ready to slaughter her enemies with the suitcase of demonic power, Dullahan.

You are the only one who can infiltrate the cursed Haunted House, guarded by the demons Roderick has summoned. You must put an end to Roderick Usher’s madness in order to prevent Lenore from being resurrected.

Level up by destroying the demons to obtain essences to craft potions that can help you in battle. Distribute Stat Points acquired from Leveling-up to enhance Ligeia’s various stats.

Gigantic, grotesque demons stand in your way. Learn their skills, dodge their destructive attacks, defeat them, and subdue their power.

Collect ‘Stigma’, a special ability of the ancient witches. By combining 30 enhanced skills in 3 slots, you can refine a variety of combat styles to suit your own play style.

200 stages created by Annabel Lee, 9 gigantic bosses, and 100 hidden stages all await you!

Various characters surround the secrets of the House of Usher and Black Witchcraft. Save them from danger and unravel the mystery of the Haunted House by conversing with them.

Ancient mystical witch rituals to resurrect the souls of the dead into corpses.
The ball of the dead, where the red masks await.
Witch hunter's pendulum to defeat the intruders.
Pluto, the black cat howling behind the walls.
Hopfrog the dwarf, and the tar monsters.
A doppelganger named William Wilson.
The Raven of Nevermore.

This bizarre and eerie Haunted House is based on the works of Edgar Allan Poe, and have been hand-drawn in a high-resolution lively 2D style.

Gothic visuals will draw you into this unique world

Black Witchcraft is for those who love the twisted, gothic world of Edgar Allan Poe, and those who desire to unravel the mysteries of the Haunted House. 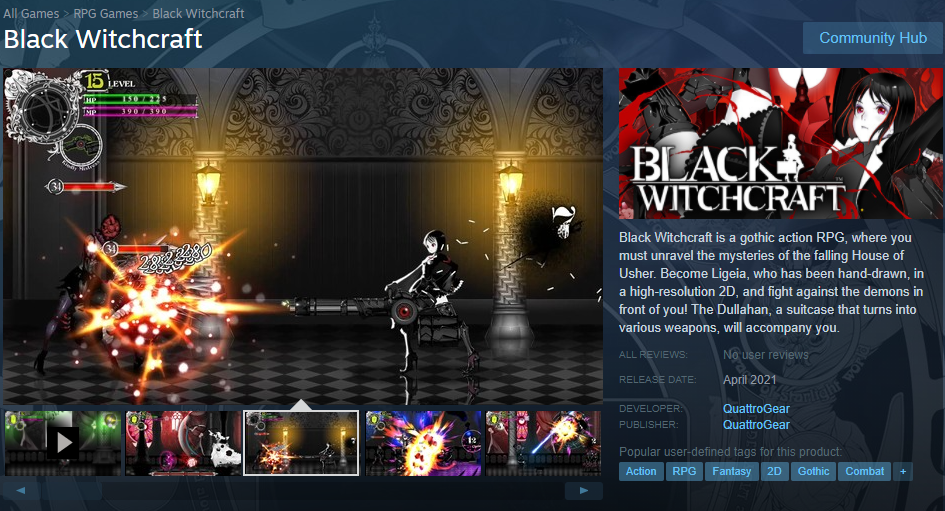 The Steam page of Black Witchcraft has been opened.

Black Witchcraft is a Gothic action RPG, The story is about becoming the legendary witch, Ligeia, and solving a mysterious incident at Usher's House.

Black Witchcraft will be released on Steam in April 2021.
The other platform is going to be released in the first half of the year.