Control a council of minions to solve crimes, investigate mysteries, and manage coverups. Reputation is everything, and the competition is cutthroat... sometimes literally. Best not be seen getting your hands dirty!

Just because Black Closet is on sale doesn't mean that we stop updating it with free new content!

In the early releases, Art Set 2 had new sprites for all the minions and new CGs, but left the randomly-generated student faces alone. We've gone back and added new art for set 2, so these now change as well. We've also tweaked the distribution of hair colors so there aren't QUITE so many redheads (the random code was leaning a little too heavily in that direction before). 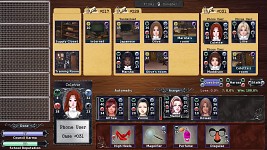 The faces and other new content will be automatically available if you're playing the game on Steam. If you have a direct copy, you may need to go into Updates and download the latest patch to get all the new content. As long as you have your license key you can always access the new content free that way.

The new character art is also available in the character-creation screen for Custom Campaign, if you choose to design your own minions rather than use pictures from your hard drive. 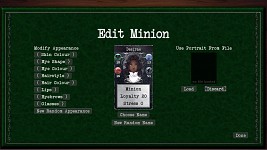 Along with the art pack, we've also added about 12 new cases to the pool of randomly-generated mysteries. There are three new base types, each with four variants. One involves a book going missing from the school library, one involves students who look like they may have been in a fight, and one involves reports of hauntings: 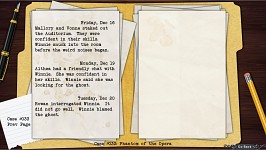 There's still plenty of room for new mysteries to be added, as long as people remain interested in the game, so get your friends on board!

So far it doesn't look like the game is enough of a hit for a beach mystery fandisc, but there will be more free cases coming along eventually. Enthusiastic suggestions help speed those up. :)

If you do own the game, be on the lookout for Halloween, because strange things may happen at St. Claudines...

However, owing to changes at IndieDB it is not likely that any future news will be posted here. Please follow us through official channels to receive the latest updates. Thank you!

Details on the latest patch releases and the create-your-own-minions mode which is currently in beta testing.

The randomly-generated mystery-solving game is now available on Hanako Games website, along with free demo and trailer.

Includes the first month of the school year, now with new character art

Includes the first month of the school year, now with new character art

Contains the first month of the school year, now with new student art

Sounds like a boardgame you can play on your computer. :-)

Worth keeping an eye on!